Sorry Florida, Long-Lost Fort May Be in Georgia

Researchers think historic Fort Caroline is one state over

No wonder historians haven't been able to find a historic but long-lost French fort in America: They were looking in the wrong state. Researchers from Florida State University say Fort Caroline—which one calls "the oldest fortified settlement in the present United States"—isn't near Jacksonville as long thought, reports Heritage Daily. The 1564 fort was actually on Rhetts Island near the mouth of the Altamaha River. That's about 70 miles away. In Georgia. 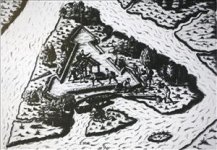 Who would win this poker game?