A little more beach silver, including a first for me

I got in about 2 1/2 hours at my favorite beach this morning and I was initially dismayed at how sanded-in it has become. I scouted for any low spots or cuts, and found one small area. Fortunately it had plenty of targets, so there was more than enough digging to do.

Most of the targets were coins from the 1970's through the 1990's, as well as usual batch of fishing weights. I did, however, find a bit of silver. As usual, it was all very toasted, and took a bit of electrolysis to clean up.

Here are all of the day's finds: 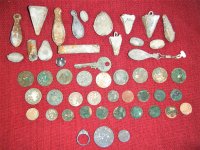 I found one dime, which just barely qualified as silver! (A 1964 Roosevelt.) 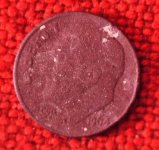 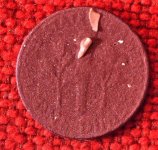 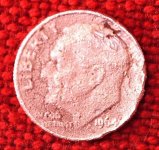 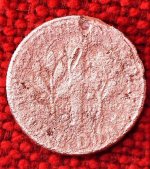 I found a neat little silver ring marked .925 in the band. There was a maker's mark as well, but I couldn't quite make it out. It doesn't show well in the picture below, but there are several tiny sparkly stones adorning the top of the ring. 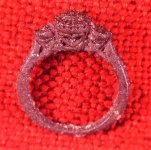 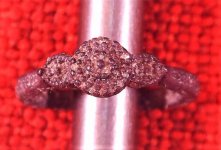 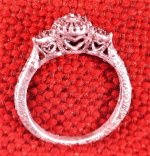 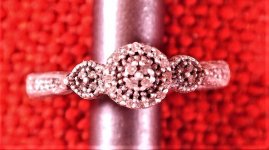 My favorite find of the day, though, was a silver half dollar. It was so toasted that I didn't know what type it was until after electrolysis. It was a 1944 Walking Liberty Half! (This is my first!!!) I know the sea wasn't kind to her, but she's still beautiful to me! 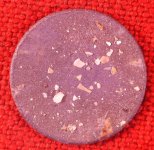 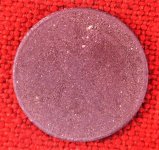 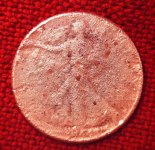 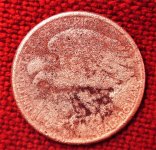 Thanks, as always, for taking time to look at my post. I know it doesn't compare to the some of the incredible coins and relics the rest of you have been posting recently, but it was fun to get out again and I just felt like sharing my happy surprise. May your next hunt bring you joy!
Upvote 16

Ok cool silver and living it up on the beach toss in a margaritta and thats pradise my friend Good job and nice finds. Tommy

Nice cleaning job. I never get much on the beach. I good day in my book...

JccEldreth said:
Nice cleaning job. I never get much on the beach. I good day in my book...
Click to expand...

Love the finds and weathered look!

Professor of Engineering said:
Love the finds and weathered look!

Thanks, as always, Professor!

Nice hunt with quite a spread of finds, very nice on the ring & half & Eisenhower. Congratulations on all the saves & HH
OP

Inspector said:
Nice hunt with quite a spread of finds, very nice on the ring & half & Eisenhower. Congratulations on all the saves & HH
Click to expand...

Thanks! I really appreciate that!
B

I will take a walker on any giving day. HH
OP

bobby5 said:
I will take a walker on any giving day. HH
Click to expand...

Me too! This just happens to be first day I did!

Wow you got a walker! She's been in the water for a long time! Congrats on saving her!

An idea on why your silver turned to a reddish color. Most beach found silver I see on here are blackish.
OP

Whyme said:
Wow you got a walker! She's been in the water for a long time! Congrats on saving her!

BlueVW said:
An idea on why your silver turned to a reddish color. Most beach found silver I see on here are blackish.
Click to expand...

I think that's just a combination of the lighting and the red cloth background for the photos I took. The Roosevelt and the ring both came out black right off. The half dollar actually came out of the ground off-white, but quickly turned black once exposed to the air.

Sweet find on the Walker! I’ve only found 2 and I’d argue they are maybe the most beautiful coin coming out of the ground. Ugly Barbers, Bens and Kennedys don’t compare. Never found a seated so I wouldn’t know 🤷🏼*♂️
You must log in or register to reply here.

Help with what is this?