Well, yesterday for the very time since the 30th of June I did NOT come home copper less. I guess I'll tell the story first. Normally on Mondays during the Summertime I work with my dad (he's a land surveyor) but yesterday he had a doctors appointment so I called up my buddy Sam and asked if he wanted to meet up with me in Rhode Island and hit a few cellar holes. So we met up yesterday afternoon and headed into the woods. These sites were quite remote and had little to no stone walls at all. They were without a doubt early settler sites that were out of this area prior to 1800. First site was right by a path and had a fresh dig hole, nothing left there so off we went to the 2nd site. This one was off of the path and was very secluded. It was a very small site but had a decent amount of iron so I knew they probably weren't extremely poor. First target I pull out is a very crudely cut spoon bowl, which turns out to be part of a late 17th/early 18th century "Trefid" Spoon. My second target is a very strange rolled up piece of brass with a nail right in the middle. Not sure what the purpose of this thing was.

Sam digs a modern pin that says "USA" and has the Olympic rings,

Kinda funny considering the Olympics are occurring right now. However, right next to it he digs the handle of another "Trefid" Spoon. Without a doubt a very early site, but we decided to move on, really not much there. The third site was on a trail and totally hammered so we moved on to the next site which was well off the trails. No stone walls at all around this site, just a couple of rock piles on each side of the cellar hole. Very old cellar hole. Right away we start getting targets. I dig a knee buckle frame and dandy button right on the lip and Sam scores a few buttons and relics as well. But just as quickly as the targets appeared they disappear and we are just about to leave when Sam swings over the cellar hole lip and gets a solid 78 signal on his machine. Out pops a gourgeous complete shoe buckle

Even though I wasn't the one to dig it, I was still very happy for him. But that wasn't the only thing in the hole. He rechecks it and out pops a complete knee buckle (iron tongue and chape). We recheck the hole again and we pull out a ramrod guide. Another rechecking of the hole yields an iron colonial table knife. What a crazy turn of events! Sam decided to start pulling out the rocks around this area and now he's pulling out button after button. Probably close to 10 buttons all different materials. I start helping him remove rocks and using my pinpointer to scan the area. I recover a nice tongue and chape of a shoe buckle and a few buttons of my own. We then get a nice copper tone in the side wall (we never would have gotten this signal without removing these rocks) he pulls out a nice CT copper and after rechecking the hole I pull out my copper, a slicky but I'm not complaining

We had to get going soon after that but we are gonna go back there with a sifter and remove some more of the rocks cause I think there is some kind of trash pit there. Weird how everything that's usually spread out at a colonial site was all found within that area. But hey every site is different. Happy hunting everyone! 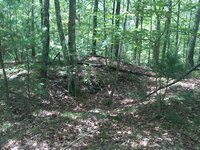 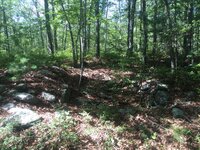 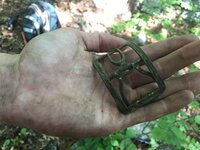 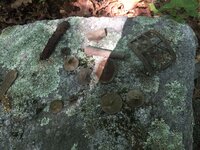 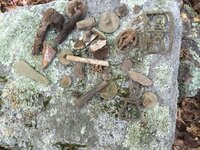 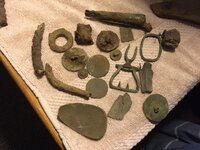 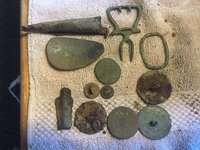 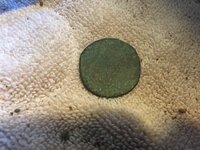 Sweet digs - congrats on the coppers

Great finds! I would love to find a whole buckle like that beauty! I've never recovered one intact. Thanks for sharing!

Congrats to you both on some very nice old finds

Wow! that is a big bunch of things ..good hunting

What a great day for relic hunting.

Looks like a great day of digging! Congrats on the old copper. The intact shoe buckle is a beauty too!

Very nice hunt, how cool is it to come across a spot like that. Congrats on your finds
S

Congrats on a great hunt! Nice coppers and fantastic buckles!

Detector(s) used
Minelab Explorer SE With a plethora of coils

Looks like a Heavenly day in the woods to me. I am still chasing my first shoe buckle. I am starting to think I might never find one LOL. I would say you definitely need to make a return trip. If you have a small coil that is a good spot to use it in between the rocks. Good luck on the return trip
You must log in or register to reply here.