Metal button with a piece of wire to attach to something.
I think the lettering is Towers Wirelast.
Thanks

Well, that could be from the late 1800s or through to the 1940s. It’s from the A.J. Tower Company of Boston who had a long history of manufacturing heavy duty outer-wear and bad-weather gear. The button will say in full “TOWER'S WIRE FASTENED” and that type of button was commonly used on things like what you guys call “rainslickers” (an almost unheard of term on this side of the pond) as well as waterproof workwear in general.

My guess would be first part of the 20th Century but it could be older. 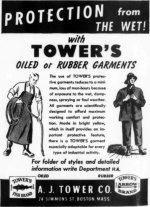 WVmetaldetecting said:
Metal button with a piece of wire to attach to something.
I think the lettering is Towers Wirelast.
Thanks
Click to expand...

Nice!!! Congrats!!!
You must log in or register to reply here.

Beautiful but not sure what it is can anyone help