Recently I have been picking up odd box lots at a local auction and have found some very interesting stuff. One I recently picked up contains a huge number (well over 100) Catholic pendants of various saints as well as enough crosses and crucifixes to ensure that no vampires get close to my house. However, while going through all these pendants (hoping for some .925 or gold, but so far disappointed), I have found about a half dozen Catholic relics. Most of these are pendants, some of which open, and contain a tiny piece of cloth that was supposedly touched by a particular saint. My question is, what do I do with them? I am not a Catholic, but I know that Catholics are against the selling of any relics. Some examples: 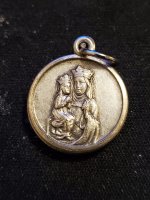 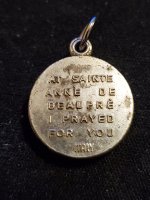 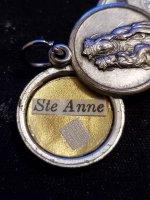 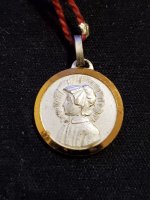 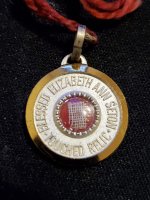 Also in MD, and I admire your desire to do the right thing. I used to be a "good" Catholic growing up, even sang in the choir in French and Latin and later English, but like so many, have fallen by the wayside. At one time, every Catholic home had a cross on at least one wall above the doorframe. I remember seeing them above every bedroom doorframe. And crucifixes and rosaries were common items. I attended parochial schools from K through HS. Many religious items could be found for sale at shrines that we visited. I don't know about selling items. When I left for grad school in the 1970's, my GF, now my wife of 40 years with a 2021 anniversary, gave me a sterling St. Christopher medal to keep me safe since I would be doing a lot of work on small open boats in bad weather. I think the items containing a tiny piece of cloth or bone inside or behind a tiny window are older than my experience. I was aware of them but frankly found them creepy.

If it was me, I would wait until after the Pandemic gets under control and then contact a priest at the local church for his advice. I suspect with the last generation of the more fervent generation passing away, they must have this question asked regularly.

Thanks for being respectful of these relics and not throwing them away.

My very religious mother died in 2019 at the age of 90. I was her oldest and disappointed her by not going into the priesthood. Every "good" Catholic family was expected to send at least one child to the vocation. My grandmother's older sister was a nun with the Little Sisters of the Poor, for example. The pressure was not excessive but it was there. I think she gave up when I brought girls home LOL.
OP
K

I have started going through the pendants that were in the box and I think that I will have to revise my estimate. I am now guessing that there are at least 200 in there. I have pulled out 10 relics. There are ones like the ones that I have found on eBay. They do not really carry a huge amount of value. I have done some checking on these relics and apparently there are different "classes" of relics. There are those relics that are actually pieces of bone or hair of the saint. Then there are those which are things touched by the saint. I have even seen what they are calling 3rd class relics being sold at an online Catholic Church gift shop. These are cards that contain tiny pieces of a piece of cloth that has touched a relic. I know that I saw one in the box that said that piece of cloth was from a piece of cloth that touched the tongue of the saint. Here is what is left in the main box after I pulled about at least 50. 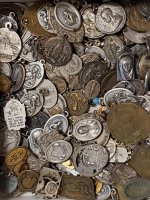 That is quite a lot! BTW, St. Elizabeth Ann Seton has a strong Maryland connection and there is a basillica and shrine to her in Emmitsburg. She was the first American born saint.

You are correct about the gift shops. They were usually connected to a shrine and very popular around Christmas and Easter as well as times around First Communion and Confirmation. Some students during our retreats would buy medals and things at the gift shop at the shrine in MA where we had our HS retreats. I remember seeing people doing the stations of the cross outdoors on their knees in the cold there. I was not so dedicated and only did the stations inside our parish church. I didn't buy anything but fishing tackle in those days, LOL.
Last edited: Dec 14, 2020
OP
K

I am less than an hour from Emmitsburg. I have passed through there a number of times.

Keith Jackson said:
I am less than an hour from Emmitsburg. I have passed through there a number of times.
Click to expand...

They may be able to give you more information and suggest how to proceed. They must have a website.

Our parents would always be on the lookout for "signs" that we should devote our lives to the Church. In my case, and I was the only one in my family to do this, it was my relationship with animals, god's creatures. My mom took a photo of me sitting on a chair reading a book outside, with squirrels and birds all over me, even perched on the book I was reading. She then cut out a drawing of St. Francis of Assissi in similar pose and brought them to our parish priest for his advice. I can still do this. I have handled many thousands of animals and have never been bitten. I've probably handled over a thousand snapping turtles with no fear of being bitten. Just yesterday, a large dog, part pit, that terrorizes the neighborhood, jumped its fence and chased a rabbit through my yard and down the street. My neighbors watched amazed as I jogged out to it and commanded it to stop, took it by the collar, spoke softly to her, and returned it to its owner. I then found the rabbit, panting, but apparently unharmed, picked it up to examine it, and let it go in one of the brushpiles I have for wildlife. I heard a neighbor say "Did you see that?" LOL

If nothing else, I think the box of medals of different saints would be appreciated by a local parish to use for its religious education.
G

This is a really cool assortment. There is even a Fatima medal.

A local parish would be a great place to begin. I also have placed medals at the literature table at the back of parishes when I travel. These days people don’t have a lot of money for “sacramentals”, of which medals are one form of. A sacramental is an object which helps to remind one of the sacraments, and points towards Jesus or helps build a person’s faith.

You are absolutely correct. Religious items are really not supposed to be sold. A priest can bless them for the new owner. And then the medal becomes a tool for the owner in their walk with Jesus. It’s not what they are made of so much as whom they represent.

If you don’t know of a parish, I belong to a parish which is a mission to a wide variety of immigrants. Many are very poor and would probably enjoy a medal or two. I’d be happy to pay for shipping and some nominal amount.

Thanks for sharing! Religious medals can be a great adventure too, especially when you read the stories of the saints on them.
OP
K

Going through this stuff, I find more and more interesting things. One is a font for holy water. I am guessing this is for a residence or some place small due to the size. It is missing the plaque that I think it is supposed to have, at least based on the ones like it on eBay. 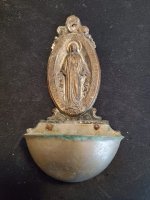 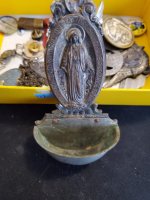 This is a pretty common holy water font. I remember my grandparents having one similar to it.

These are known as third class relics and can be bought and sold. I'm not a religious person, but I do know about these religious items from seeing them on eBay.

I read over the Wiki entry and some other information that I found. I didn't figure that I had anything really important, but there are 2 that have me a little confused. One, I am guessing is from Saint Padua as it says on the back, "Linen touched to the holy tongue of the saint." However, the only entry I could find for a Saint Padua was for Anthony of Padua who died in 1231. I am kind of doubting that this bit of cloth is almost 800 years old. 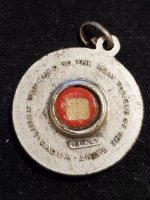 The other one, I am guessing based on one on eBay like this one is Mary and the baby Jesus, but on the reverse of this one it just says, "TERRA CATACOMBE ROMA". Any ideas? 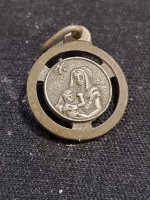 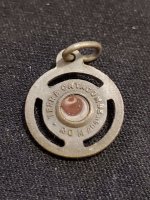 Wow Keith, that is an amazing collection!

For an old "Cradle Catholic" they bring back many memories.
S

I'm a lay Dominican, the order named after St. Dominic!

Catholics don't buy and sell relics and your best bet is to ask the local Catholic Church if they would like to be their new home.

I like the holy water font. We have one at the back door. It's dry now since we stopped going through the back door so often once we got into urban poultry and did some fencing that made it tough to drive back.
You must log in or register to reply here.

Fewer Finds Due to COVID-19