This unique granite outcrop landmark feature has hand and foot holes ground into the slanting face of the granite to the top. I have climbed it and appears to have been once used as a Native American "Deer Stand", or should I say "Rock Stand!" Looking down you can scout the area silently, overlooking a stream and Oak trees through the woods. Not only was it utilized by Native Americans, but was also a popular picnic site. Evidence found dates from the late 1700s and into the early 1800s. Shown are some of the unique flat buttons from around the area.

One exceptional and rare find was a silver coin button. This silver button was crafted from a silver Spanish ½ Reale coin, featuring King Charles III, and minted between 1759-1788, it is heavily worn or intentionally buffed down and exhibits a faint crown and shield on the front of the button and a solder mark on the rear of the coin where an wire shank would have been soldered in place. This silver button was reserved for people of above average means and monetary status. During the Revolutionary War period, these coin/buttons were worn by early colonists as defiance against the British Crown and Parliament policies. 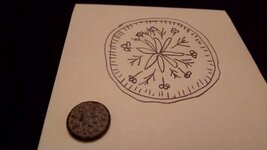 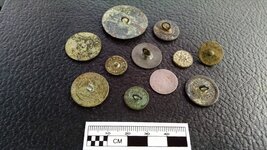 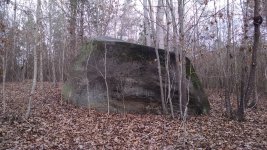 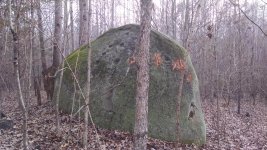 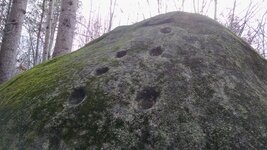 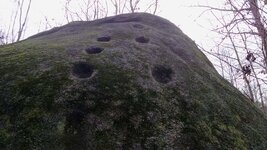 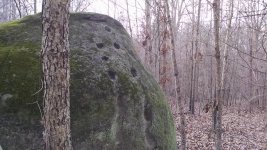 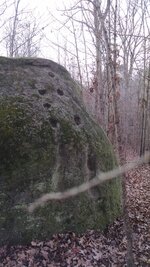 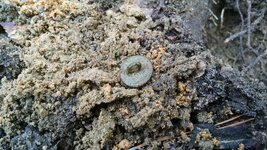 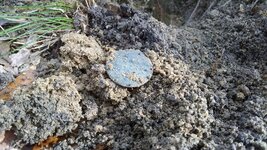 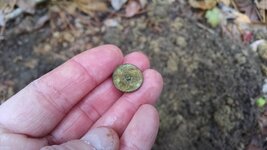 That's a cool site and you made some nice finds there. Your Spanish coin/button was probably a cuff link at one time and then it was spent when the owner was in a pinch for cash. I have found 3 made from actual Spanish coins, and several others, including a lined pair, that were made to look like Spanish coins. Two of mine were obviously put back into circulation as the shank nubs are worn smooth.

I bet there are some native American artifacts in the ground around that rock.

There's just something about that site! Great finds.

Excellent hunt with a nice variety of flat buttons. That rock is really awesome. Someone took some time to carve those notches and that's really cool. Must of been a great hunting spot to carve those, rather than making a ladder. Congratulations on the 1/2 real button as well.. that's one awesome find.

Thank you for sharing, looks like a very interesting place to hunt!

Congratualtions on the button finds!

Great post! very interesting and some awesome finds..here in central Ohio there is a lot of sandstone, and not far from my house is an outcropping of sandstone with a set of "steps" cut out in it, on an almost vertical face...was very cool to see yours...thx for sharing, ddf.

Excellent set of buttons. I'm always a fan of a good button hunt and you rocked it!! Also, that rock with the footings is so neat. Thanks for sharing your day man.

Cheers
You must log in or register to reply here.