Finally, a few items worth posting!

After 4 previous hunts, I finally found a few things yesterday worth showing everyone.

This site just came available to me on May 1, so I detected it yesterday for about 4hrs before the rain moved in. A few interesting items popped up; the first find was 1816 Wellington Halfpenny. This coin is very thin and the details area not clear, obviously a copy made sometime in the 1820s or 30s. The porcelain doll heads and the bronze ‘Ministry of Housing Ontario’ plate were eyeball finds I found discarded under the back porch. I also found a couple of one-piece tombac buttons, a 1940 George Penny and few modern pennies. Something I found interesting about this site, was that the original horse stable was still being used, but as a garage for a car. The stable still had the feed trough and a spot where the horse would’ve been tied up.

I’m going to head back here again next weekend before the grass gets too tall to get the coil close to the ground.
Hope everyone has a great week!
Dave

Wellington Half Penny Token ‘Montreal’ 1816
Lower Canada (what is now Quebec) had the greatest number and variety of tokens in circulation. The Wellington tokens, a series of halfpenny and penny tokens with a bust of the Duke of Wellington, appeared in about 1814. They were popular, and many varieties were issued locally after 1825. In 1825, a halfpenny of Irish design was imported; its popularity resulted in its being imitated in brass, copies of which are very plentiful. In 1832, an anonymous halfpenny of English design appeared and was extensively imitated in brass. Counterfeits of worn-out English and Irish George III coppers also circulated in large numbers. These counterfeits were called “blacksmith tokens” as they were popularly believed to have been struck by a Montreal blacksmith to pay for his drink. This period ended in 1835, when the banks refused to accept such nondescript copper, except by weight. Upper Canada (what is now Ontario) first used local tokens after 1812, when a series of lightweight halfpennies was issued in memory of Sir Isaac Brock. These were superseded after 1825 by a series of tokens with a sloop on one side and various designs (e.g., plow, keg, crossed shovels over an anvil) on the other. In 1822, Lesslie & Sons issued a copper Two Penny token. The firm also issued halfpennies from 1824 to 1830. 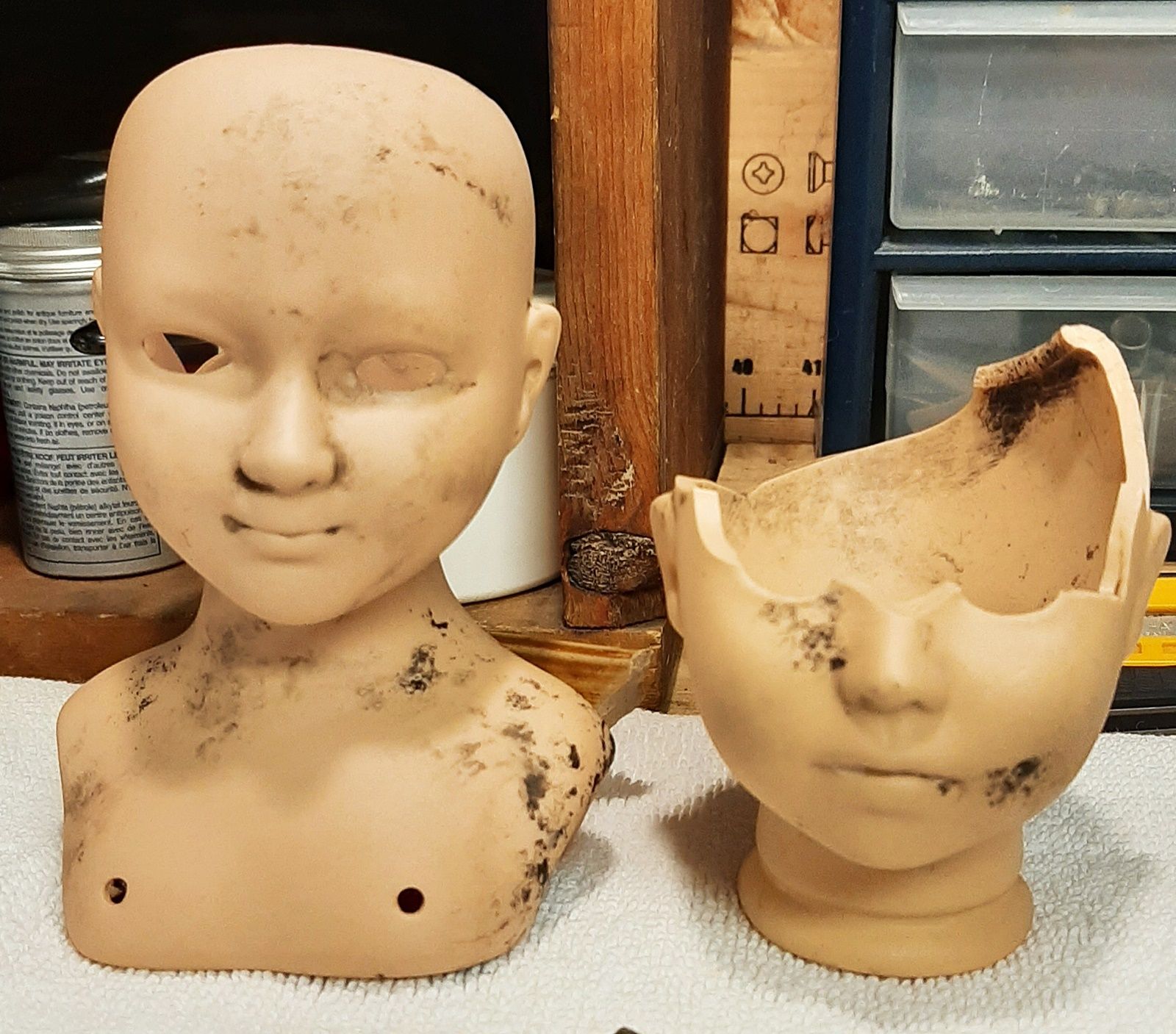 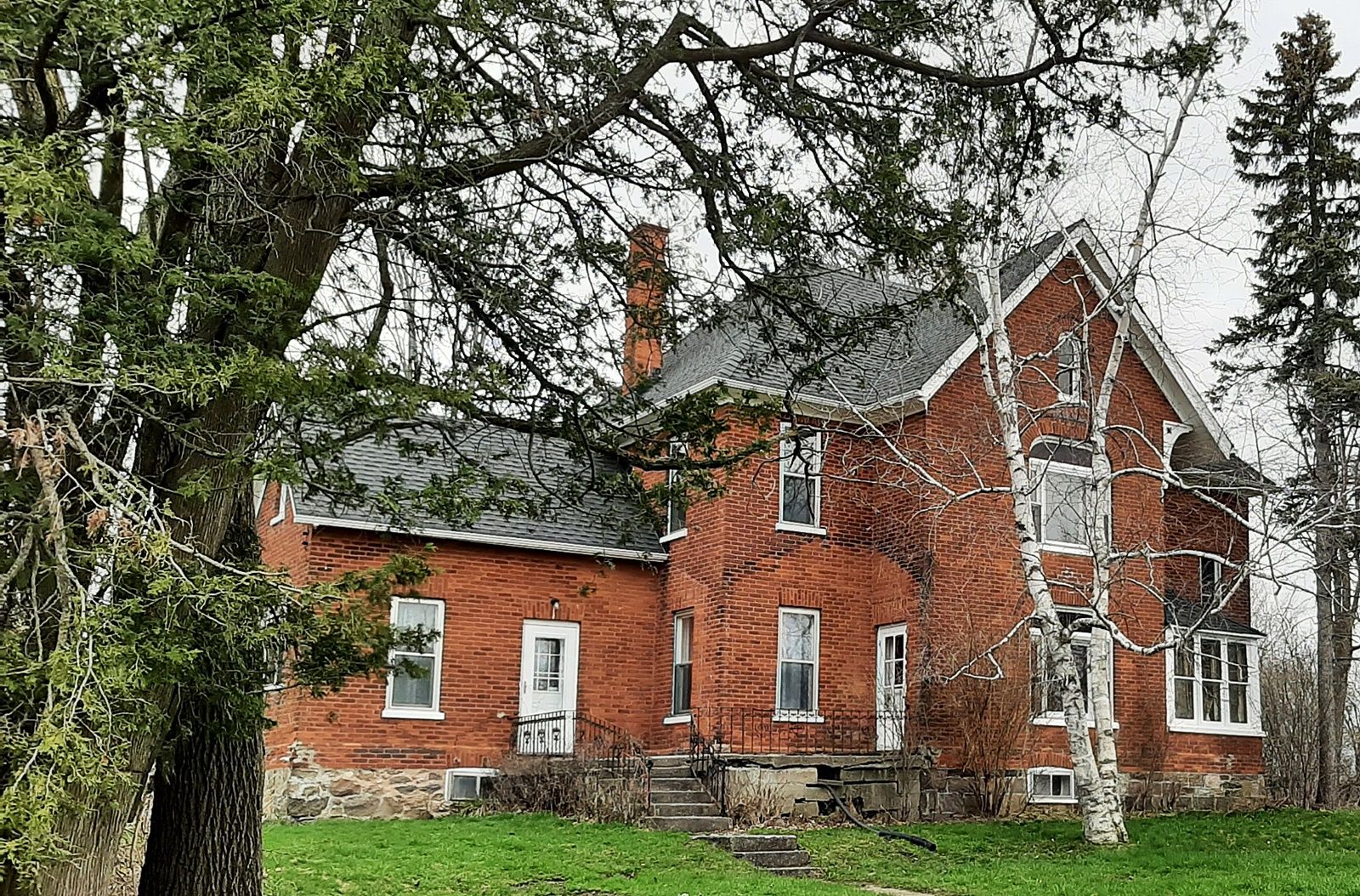 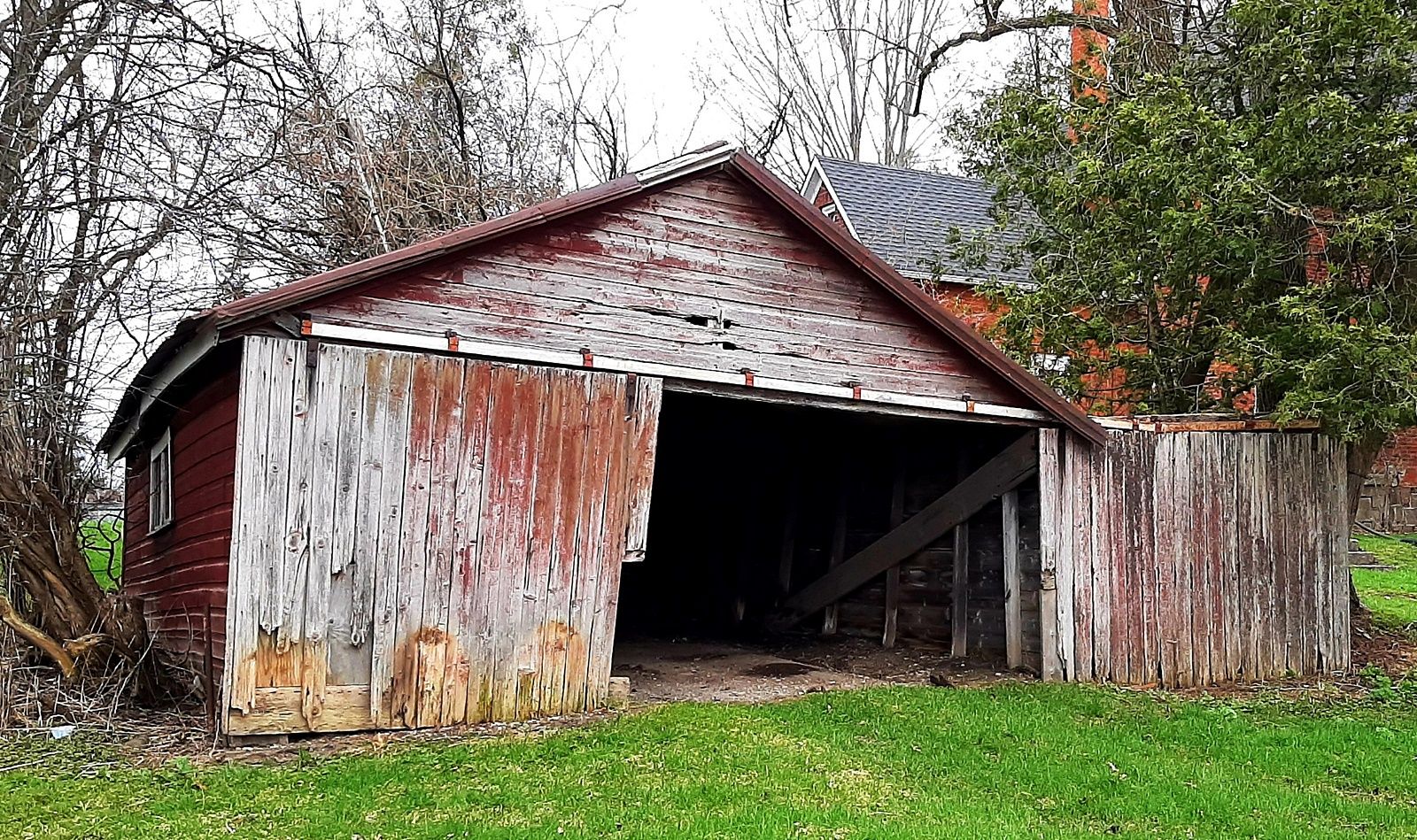 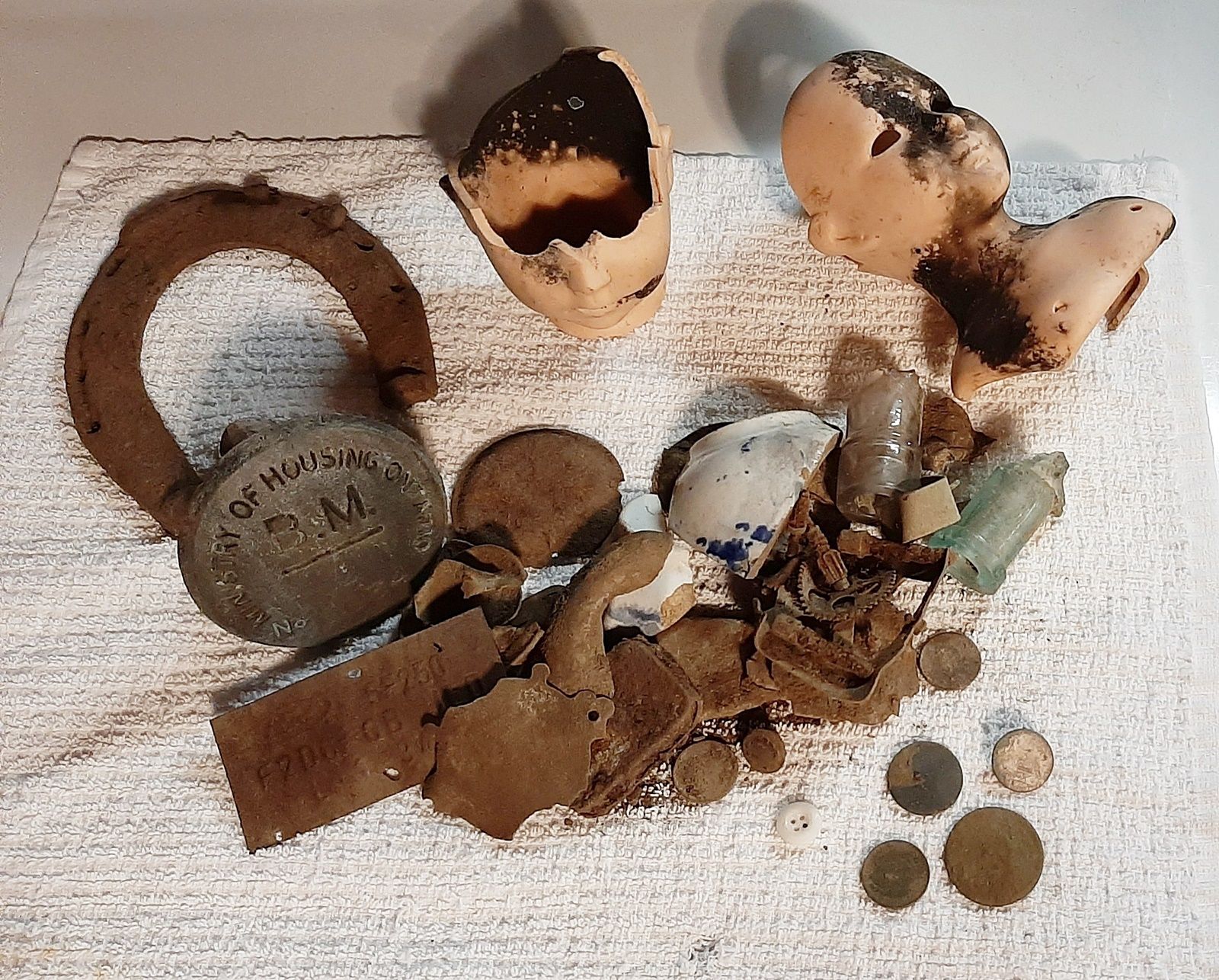 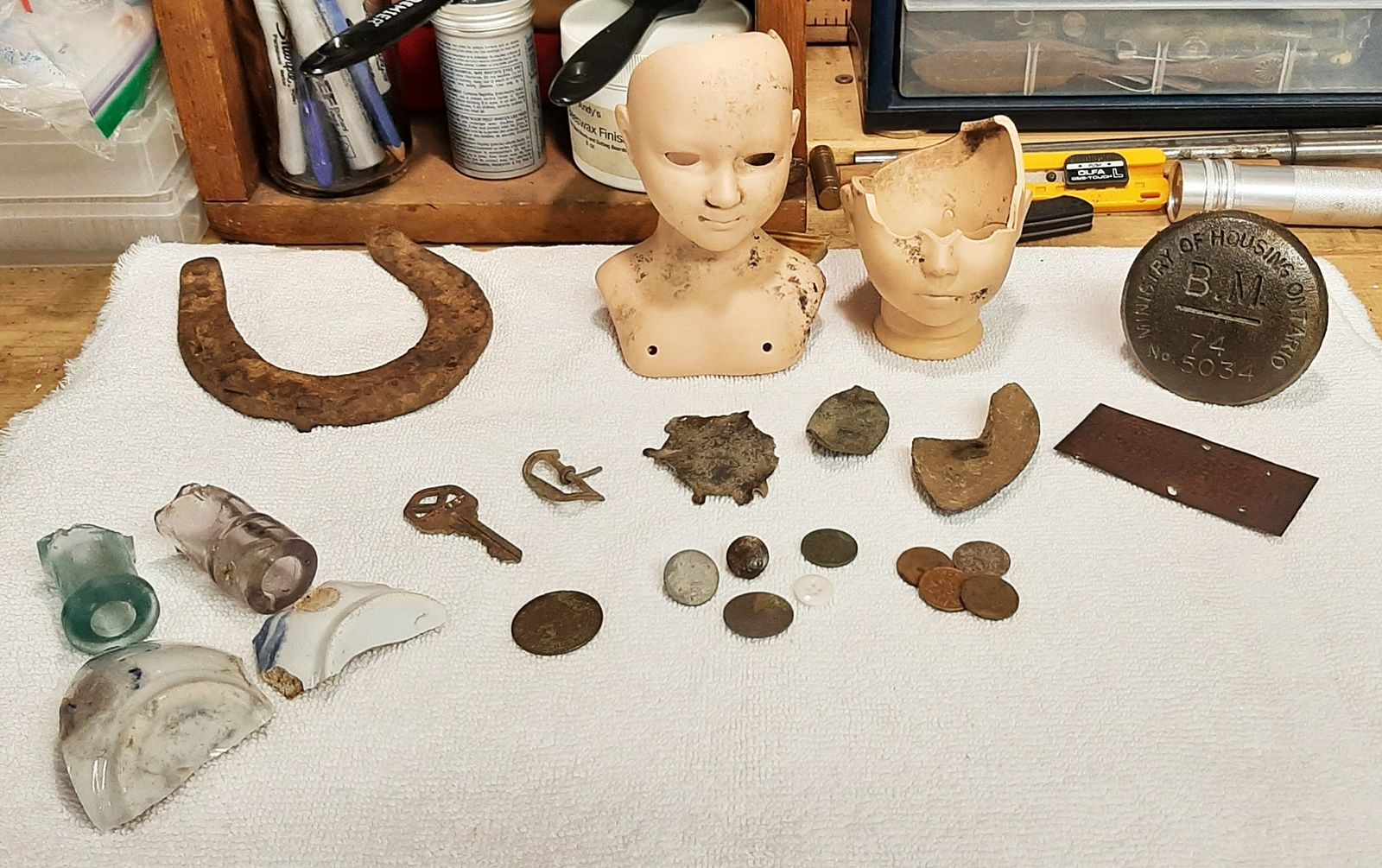 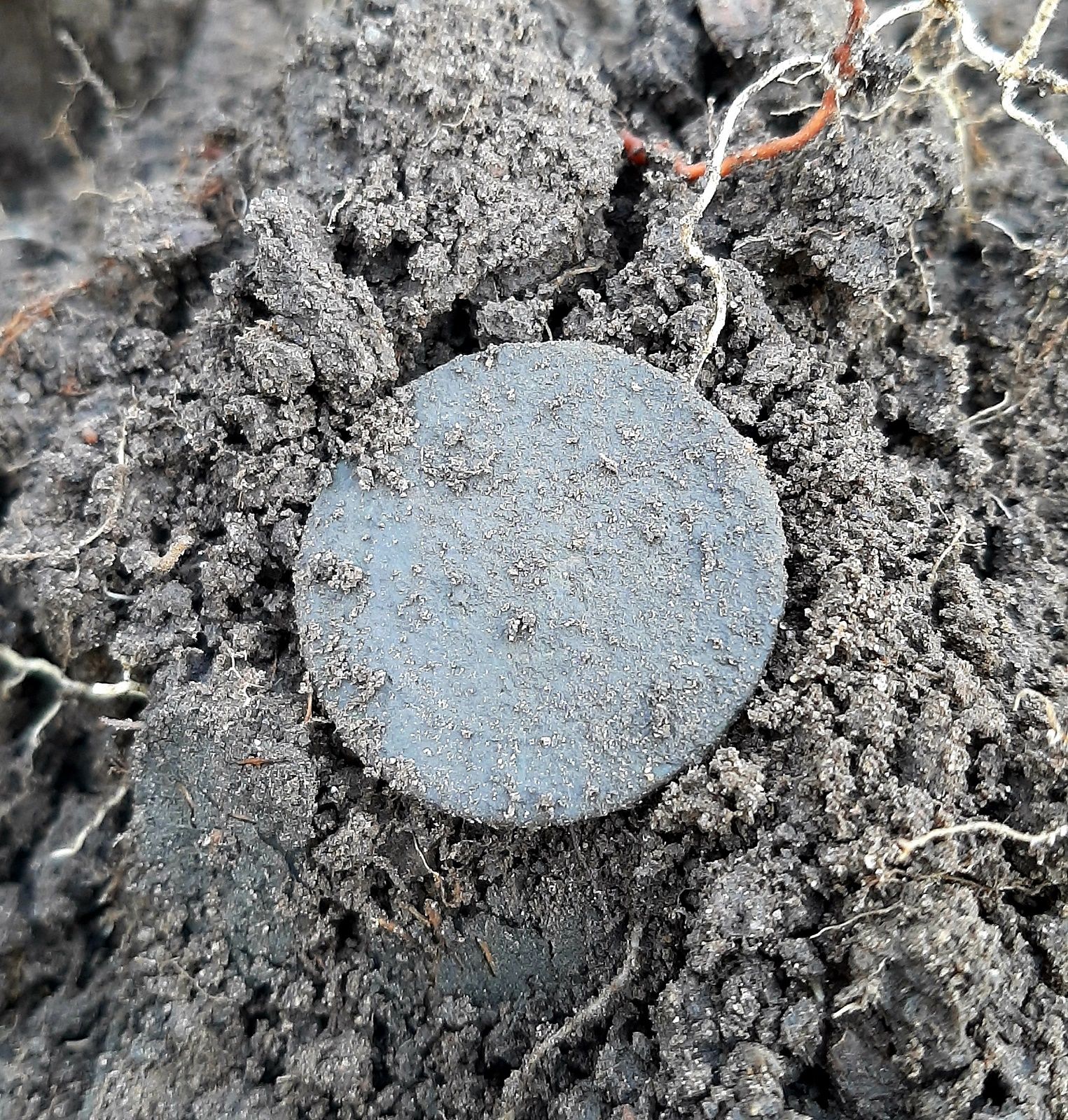 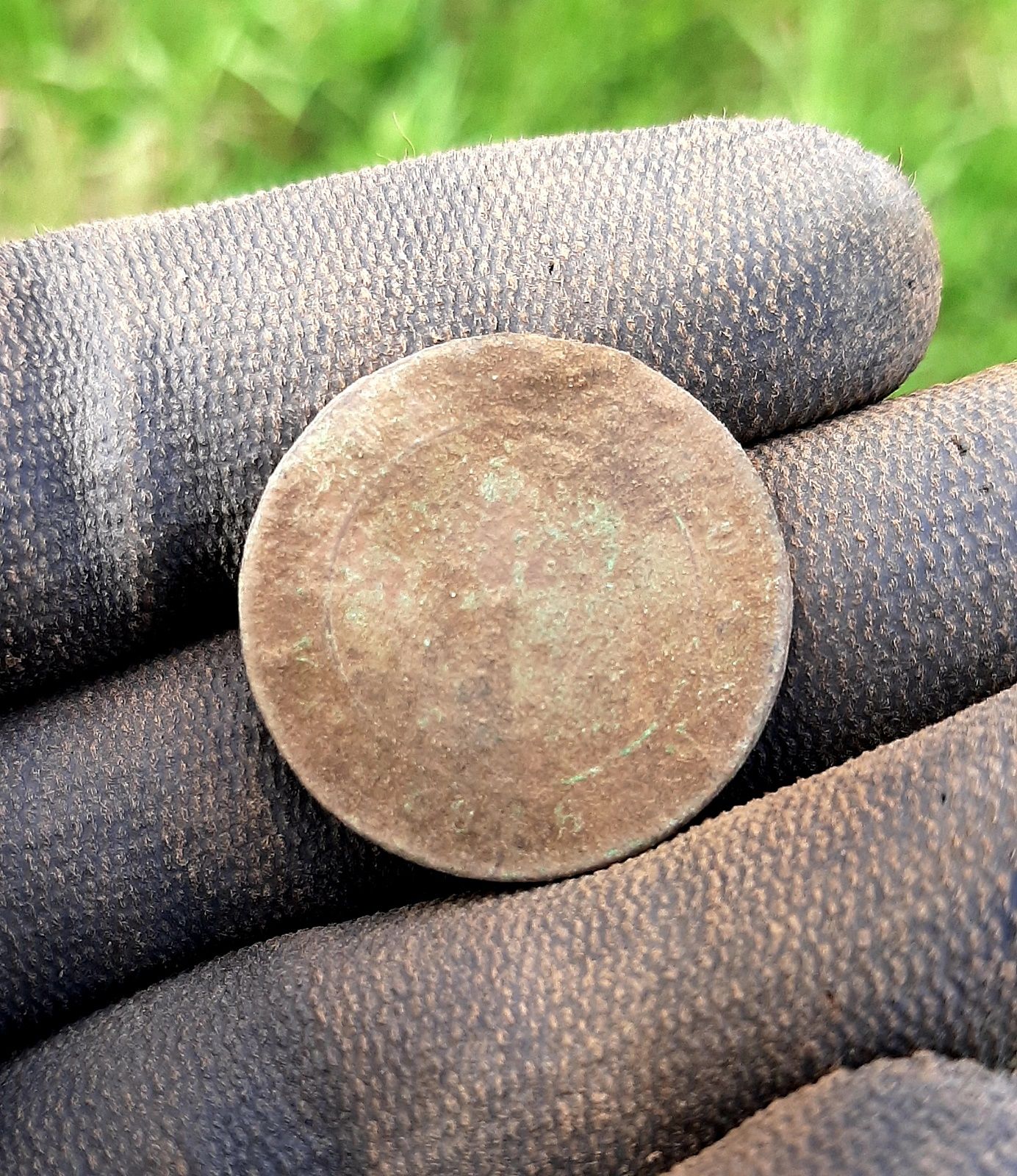 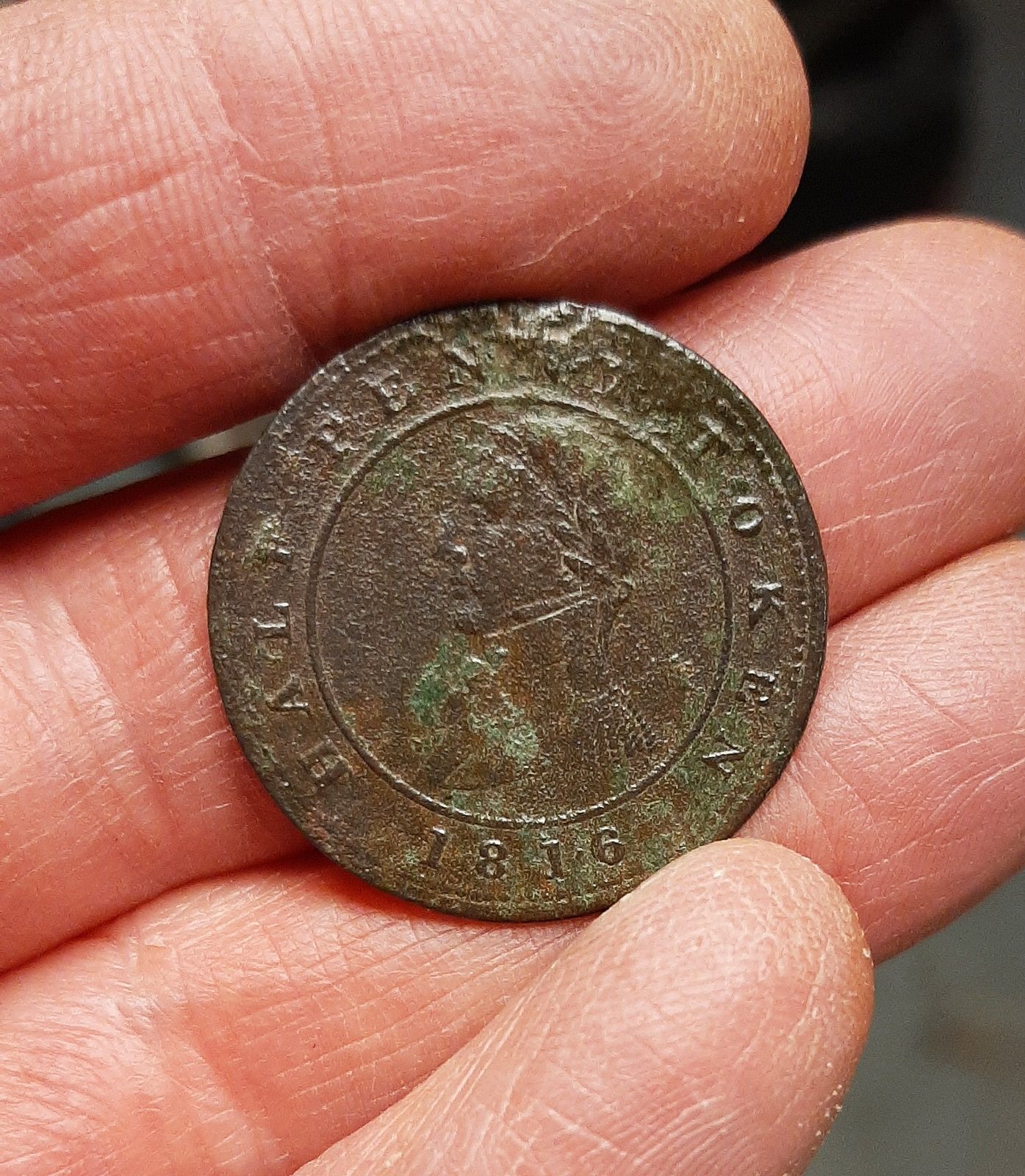 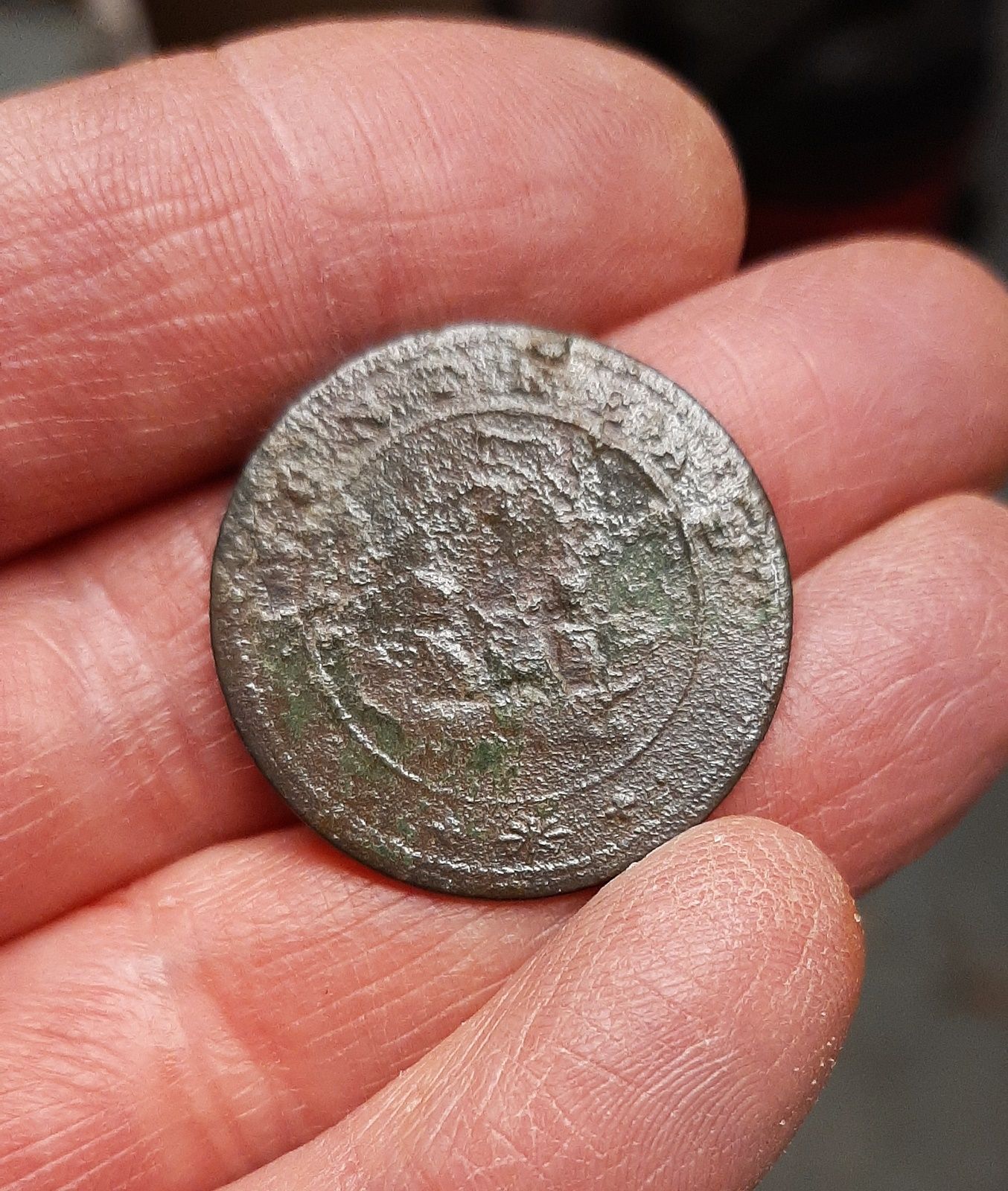 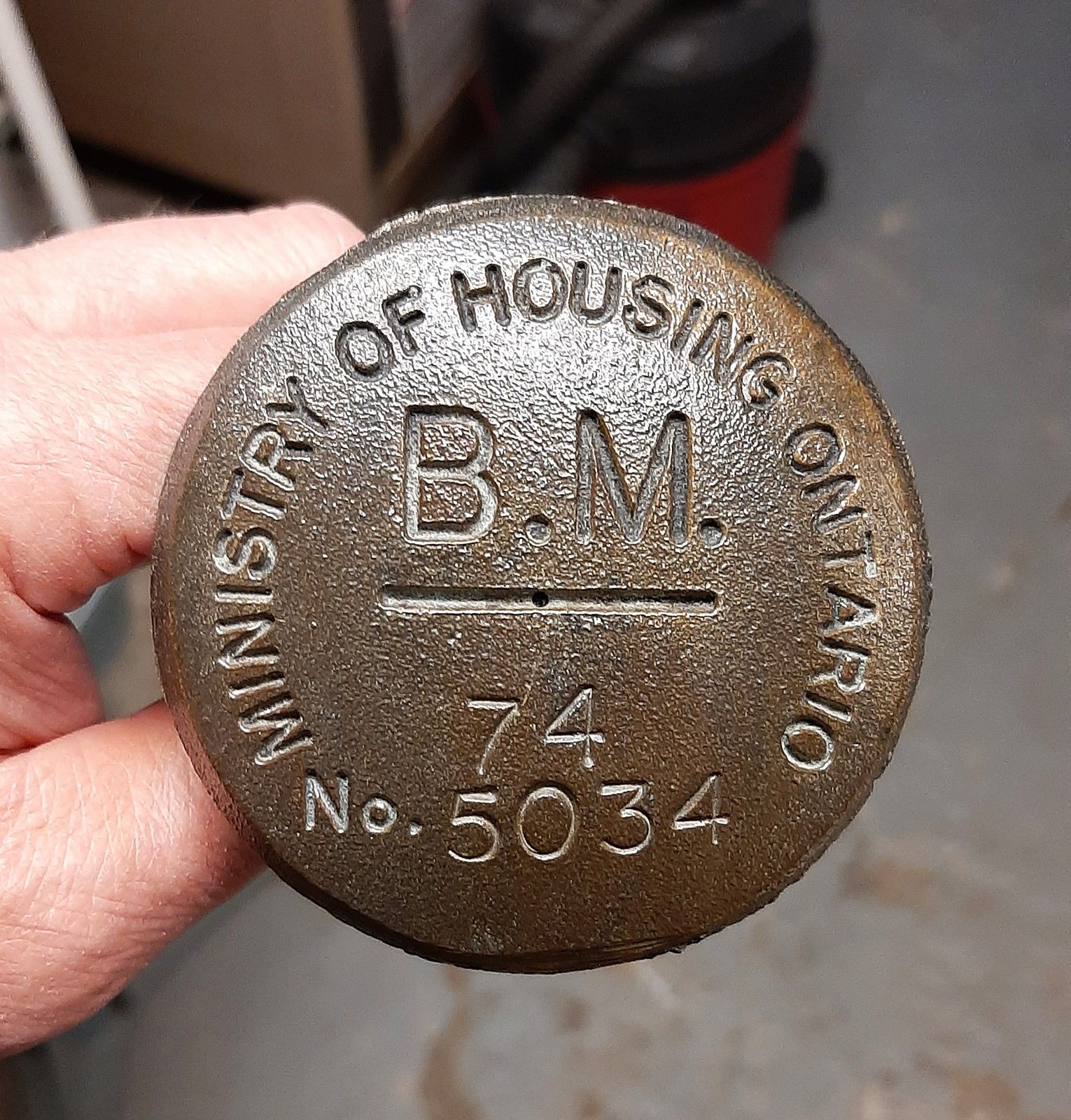 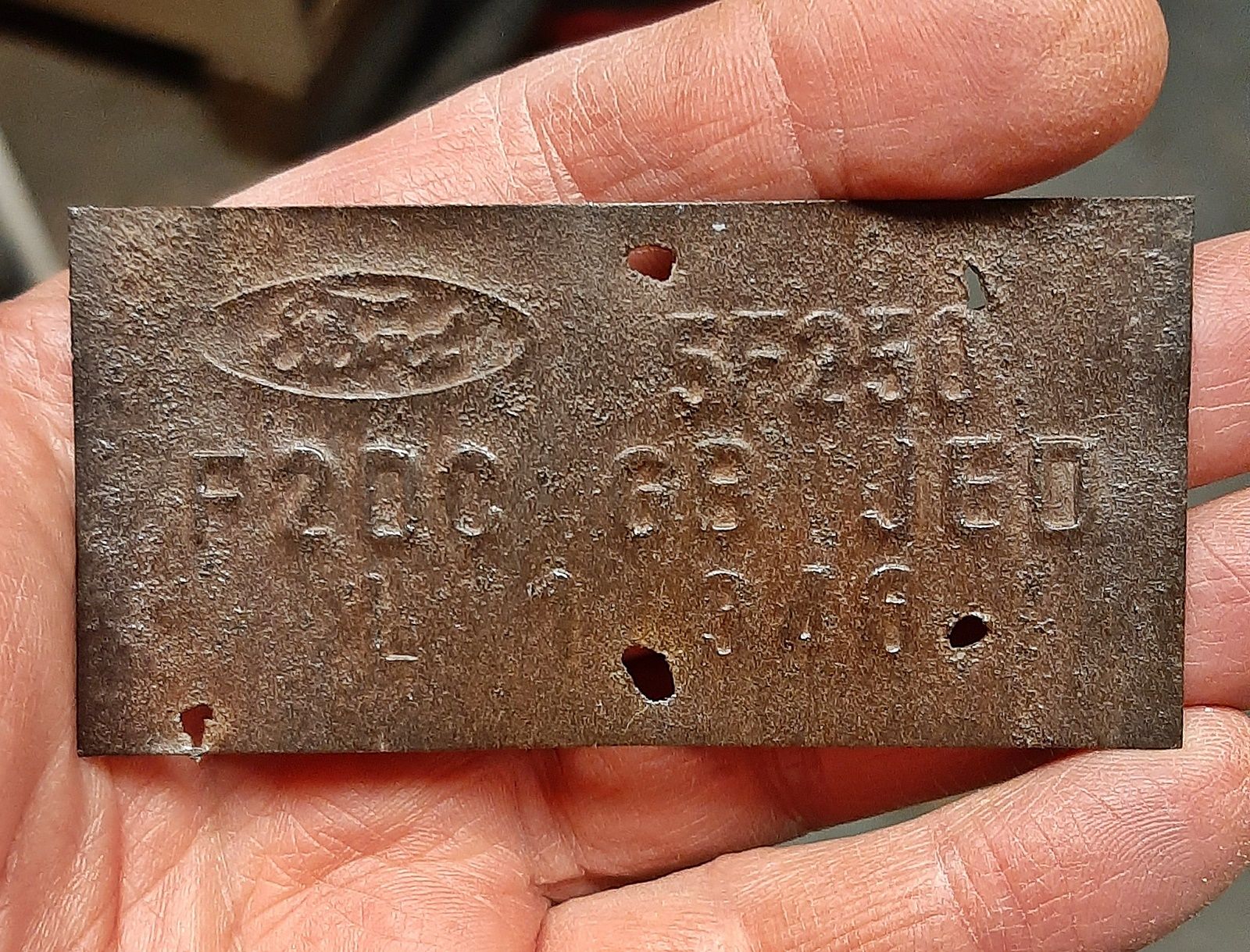 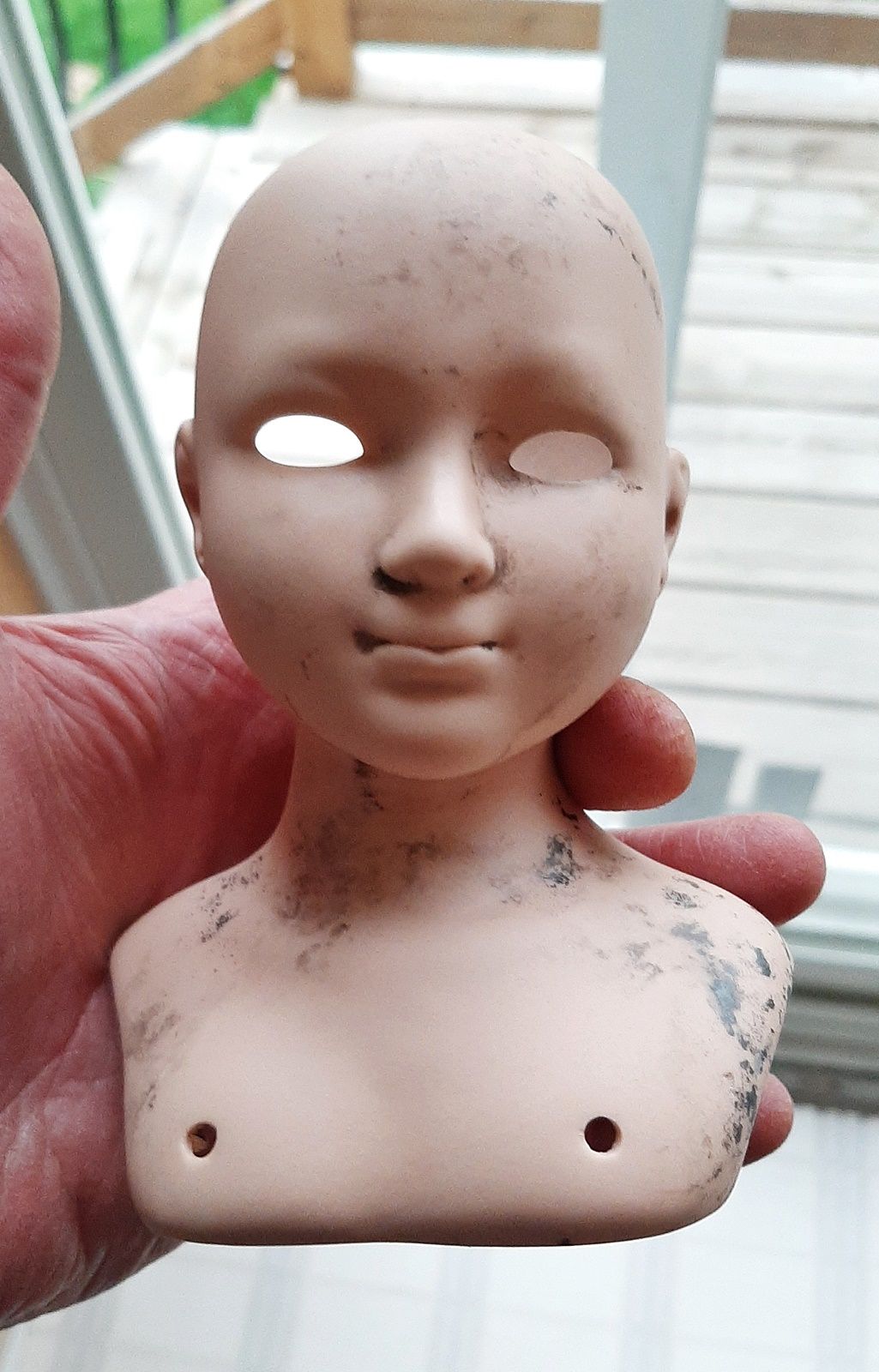 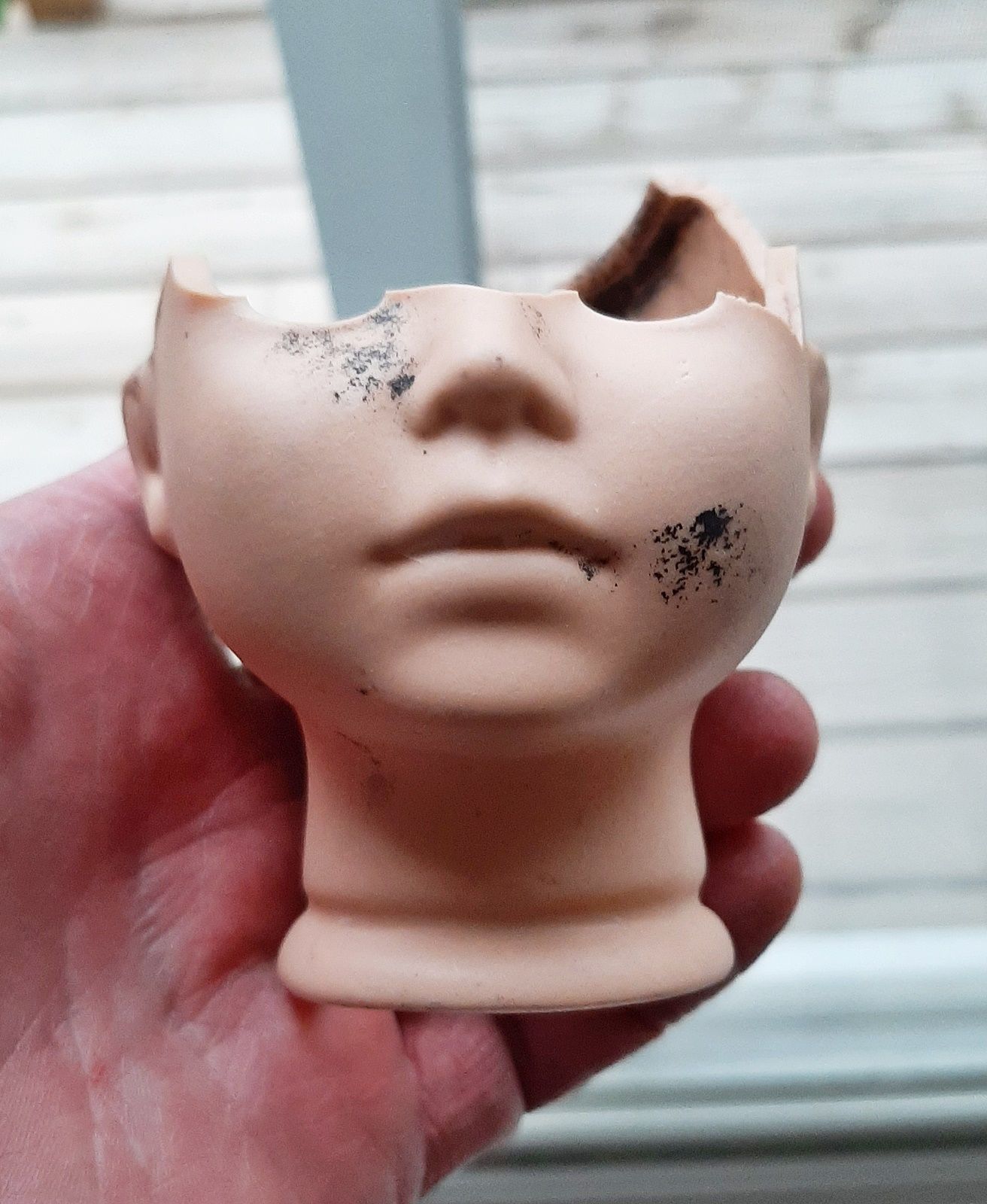 CRUSADER said:
Like the token, not so keen on the dolls heads, back away slowly....
Click to expand...

Thank you Cru, hope you and your Dad are both well these days.
Dave
OP

Thank you my friend, I honestly haven't found anything worth posting this year until now.

Update:
For some reason, I woke up Monday morning thinking about a fragment of porcelain that I'd left behind under the porch where I'd found the heads. So, yesterday morning I went back to the site and headed for the spot where I found these and recovered the back portion of the dolls head.

I'm going to take a small rake with me when I head back this weekend, as I want to rake out the leaves under the porch to see if there are any other pieces I may have missed.

Thanks to everyone for your posts and interest!
Dave

Looks like a fun hunt. Nice mix of finds... doll heads not withstanding. 😬😬

What's the Ford plate off of?
C

Detector(s) used
Tesoro compadre, which can find needles, but looking for something with a bigger coil/detects deeper, waterproof salt/fresh user friendly.

If anyone else has an idea of how old these porcelain doll heads are, I'd be interested.

They do look older...just great finds from the past...

Hello dave....nice hunt....I know the feeling, I'm currently in a slump myself. That dolls head is creepy !!

What are the markings on the back of the doll head?

You may be able to ID it here: https://www.dollreference.com/

ANTIQUARIAN said:
Thanks Bill, hope you're finding some treasures in NY.
Dave
Click to expand...

What's the Ford plate off of?
Click to expand...

It's a surveyor's benchmark. A "permanent" registered surveying point. They are supposed to be left in place. Oops. Nice finds.
L

Nice finds!! Thanks for sharing! That place looks like it will be fun to dig!

That looks like a great place. Love that old brick house! Hope it gives some more!

those doll heads are creepy
D

Excellent finds Dave. The usual clean up of them too. Glad you were able to get onto a good site.

What's the Ford plate off of?
Click to expand...

I'm sure with a little research I could find our what it's from, but I'm thinking it's possibly FORD farm machinery related related. Hope you're doing well in VA. - Dave
OP

Coinstar magnet said:
They do look older...just great finds from the past...
Click to expand...

Thanks CM, I'll head back again tomorrow morning to see what pops up.

Blak bart said:
Hello dave....nice hunt....I know the feeling, I'm currently in a slump myself. That dolls head is creepy !!
Click to expand...

Great to hear from you Bart, I miss chatting with you guys every morning.

I know you'll get onto something big soon, you always do my friend.

Hope your family is doing well these days.
Dave
OP

DCMatt said:
What are the markings on the back of the doll head?

You may be able to ID it here: https://www.dollreference.com/
Click to expand...

Thanks for the link Matt, I'll check it out.

I did look for a makers name, all I can see are mold mark reference numbers.
OP

billb said:
Dave I’m hoping to get out very soon for the first time
Congratulations on your nice recoveries
Click to expand...

Morning Bill, the weather's supposed to be nice here all week, so you have no excuses buddy.
I'll head down to Lake Ontario and wave at you from across the lake.

Thanks buddy, I still haven't taken your ring into get restored yet, but I will.

I've been travelling a lot with work lately, so I haven't been home much. I'm home now for a week before I fly to the east coast for week long trip.
Hope you're doing well in NV these days,
Dave
OP

Kray Gelder said:
It's a surveyor's benchmark. A "permanent" registered surveying point. They are supposed to be left in place. Oops. Nice finds.
Click to expand...

I figured it was a surveyors plate, but in my defence I found it in the brush next to the house. I'll often find these set into a small concrete pad buried in the ground at sites.

Thanks for the info Kray.

2 Jars of coins left behind