I went everywhere and dug everywhere over the weekend. First couple spots produced a wad of colonial items. I still have to get pics of those.

The last spot of the day yesterday was an unknown in the woods. Besides getting a tick, the area is rich in history along a major river. I had fond a place to access the river (it was kinda creepy back there), and dug the usual garbage and some nice 18th and 19th century buttons. I did not find any musket balls but believe I found an old homestead.

I had not intended on staying long due to the trash. I had used my Cibola. It hadn't been out playing much lately. I got a huge dig me I'm trash signal and out popped this large dandy button with a shank. I never remember to bring a camera with me, basically I don't want to ruin a $400 camera, so no in situ pics, basically I never get around to that and flip the thing over and see something on it, but it's caked in wet mud.

It gets thrown in the pouch and this morning I dig it and the other stuff out. And fall over when the mud starts coming off!

It's a George Washington Inaugural button, and if I wanted to dig one, this is the one I would have preferred to dig!

It's the "GW with linked states". Used for the 1789 inauguration, it is/was about the last thing on my bucket list! All the detail and the shank are there. The soil is very, very mild there.

Yowsers! I'll have to clean up the other stuff later tonight, one button has an anchor and eagle on it.

Wish I could call in mentally ill and go back today, but have to calm down and go to work. I'll try some renaissance wax on it to see if the detail can me made more visible, but it's all there! 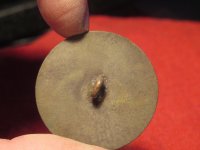 Can you spell "excited"?

It does have great detail and not all bent up. I think I over cleaned it, but the corrosion wasn't thick on it to begin with.

Congrats!!! What a find, I envy you back east guys, we can only dream of things like that in this part of the universe. Thanks for sharing.
R

What an awesome button! It would have been worth multiple ticks! Congratulations! Now go back and find his brother!

Awesome, Smokey! What a great day for you! I would probably go ahead and call in sick.

You did have a tick. That alone should be good enough.

Wow super find , congratulations!!!, maybe one these day I'll get to go back east.
OP

Wrightdigger, it's true I did have a tick bite me!

Here are some more pics of the stuff. The "U" on the keyboard sticks, so if this looks like a 2 year old cat typing, just laugh.

Not pics of everything. Off to work soon. 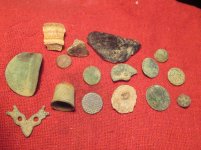 The nails, handmade bolt and piece of 17th century bellarmine jug are from site #3. 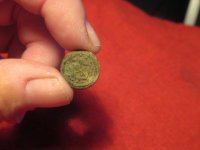 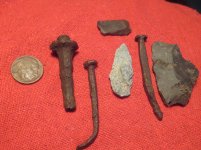 Can anyone identify this 2 piece with shank navy button? Eagle over anchor. It is a little bent up. Thanks. I'll try for a better pic late tonight or tomorrow. Have to get out the digital microscope for that picture.

Holy smokes, Smokey...NICE!! What a beautiful example, the detail is awesome! Yes, I'd call in sick, heck call in dead! I'd be beatin feet back there, spritz down in Deep Woods Off and dig EVERY signal! Congrats on that excellent save, you certainly earned it. Ddf.
OP

Call in dead? How about retired since I'm well over 62 now. Lots of copperheads down there. And far off the road. Not a good place to get into trouble. I was actually way out of my element going there. It is a public place but not a park, so ok to dig but it's wild, overgrown territory.

And that is a buffalo nickel and an arrowhead or drill.
Last edited: Jun 4, 2018

Congratualtions on the beautiful GW button! The detail is amazing!

Thanks she be purty! I'd like o take it to work and play with it all day, but the way I lose stuff, never mind.

Fantastic button-that's my favorite pattern (not like I've found one but I still like it lol) and it is in exceptional condition. Congratulations-my banner vote is in.
OP

Thanks downNdirty. It's amazing no one has even SEEN the little navy button posted with it.

You are something else!!! Can't wait to see it. Banner nom in.

Amazing condition!!!! Gonna have to vote banner on this one. Your navy, I think is a federal navy button 1830-1850. Lots of great finds!
You must log in or register to reply here.