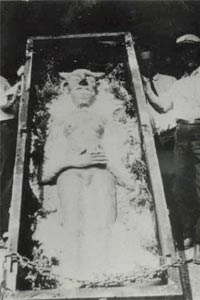 Where is it now ?
OP

hmmm, probably stored away in a museum basement or sold quietly to a collector .
maybe even to Anton Lavey for his church decoration when he was still alive

had to be worth a few bucks

I would love to hear more about this

[Scott County, Tennessee
The Helenwood Devil
This page was updated 06 Sep 2008
The Devil
There was exhibited last week at the Somerset Fair an object that attracted several thousand people into a small tent. They each paid 25 cents admission fee. Some came out and said the whole thing was a fake, while others said they would not have missed it for a dollar. Anyway, it was the biggest drawing card at the fair. The object that is attracting so much attention was found by Crusie Sexton while digging for coal near Helenwood, Tenn. It has the appearance of a petrified form, about five feet, ten inches long, large head with horns, large nose and ears, wings reaching to ankles and teeth showing. The arms are long and slender and are crossed over the body. The hands have extra long fingers and the ankles are enlarged. Mr. Sexton, who made the find, was in the city this week and made an affidavit that he found the object in the ground about five feet below the surface. He dug it up and removed it to Helenwood where it created such excitement that he put it in a box and charged admission. IT is said that the sum of $25,000.00 has been offered for it. It is owned by Mr. J.C. Pemberton of Oneida, Tenn., now. The form is now reposing in a box with iron bands around it, four pad locks on the box, nails driven in the lid and a guard standing watch. A professor from an eastern university says it is some ancient idol of an early race. Anyway, whatever it is, the owners bid fair to get rich. (Source: Somerset Journal; Somerset, Pulaski Co, KY; 9 Sep 1921)]

[Back in the coal mines around the Paint Rock community, Sexton began his work. He built the "Devil" out of bed clay, which was near seams of coal. The mine that he chose to work in was an abandoned and dark place. There, he spent days trying to get each detail perfect. He finally finished the statue, which was larger than the average size man and weighed over a ton.]

https://www.nps.gov/biso/learn/historyculture/scottcodevil.htm
You must log in or register to reply here.

Did a Meteor Explode Over Pittsburgh?