I suspect that those are either replicas or fantasy coins.
Upvote 3
OP

faribo said:
I suspect that those are either replicas or fantasy coins.
Click to expand...

M.K.D said:
Here is a 3 silver ancient coins that i need help with identification
Click to expand...

Have you tried the coinoscope app? Works pretty good for me, check it out. Might help.
Upvote 1

They look Greecian . no clue if they are replicas or not but if they are legit they are immaculate. Those are beauties for sure.
Upvote 0

You can still buy a replica of the one in picture 8.
Upvote 0

These are certainly not fantasy coins. They’re typical Greek (Macedonian) tetradrachm designs. It would really have helped if you had paired the obverse and reverse designs. I presume these are the pairings:

The first two coins have reverses with Zeus seated, holding an eagle, and the legend ΑΛΕΞΑΝΔΡΟΥ which is for Alexander. They look to be Alexander III (the Great). The obverses both have the head of Heracles wearing a lion skin, usually taken to be Alexander portrayed as Herakles. Alexander ruled from 336–323 BC but the Herakles portrait is beardless, which usually indicates the earlier part of Alexander’s reign.

The third coin has Herakles standing, draped in a lion skin with his hand resting on a club and the legend ΗΡΑΚΛΕΟΥΣ ΣΩΤΗΡΟΣ / ΘΑΣΙΩΝ which translates to “Herakles, Saviour of the Thracians”. So that one is from the Thrace (Thasos) region of Macedonia. The obverse is Dionysos wearing a wreath of ivy leaves. That one will likely be 2nd Century BC but is of a type produced between about 148 BC - 80 BC.

What you haven’t told us is whether these coins were personal finds, recovered from the ground, bought from a dealer or whatever? Alexandrian tertradrachms in particular are heavily faked/replicated, although I don’t see any particular red flags here.

As well as proper pairing of obverse and reverse, it aways helps for unknown coins if you give the weight and diameter (approximate, since ancient coins often aren’t completely round).
Last edited: Mar 6, 2022
Upvote 10

The top photo really looks like some sort of tourist token to me.
The others, I don't think any coins in Greece/Rome were silver like this at all.
Upvote 0

GoldieLocks said:
... I don't think any coins in Greece/Rome were silver like this at all.
Click to expand...

Oh... they most certainly were! 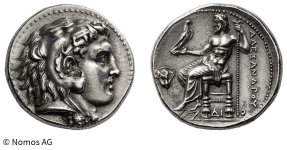 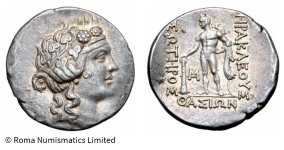 There were multiple mints producing these coins in dozens of variations in the third to first centuries BC. Someone with more time and inclination could track them down more precisely, but they're typical of the period and are either genuine ancient coins or faithful modern reproductions of the types I've given. Not likely to be reproductions if actually recovered from the ground in Macedonia, but to be treated with suspicion if purchased... although, as I said, I don't see any obvious red flags.
Last edited: Mar 6, 2022
Upvote 5

The OP said he found them in the ground.
These three and the fourth one I previously ID-ed all look legit to me.
Don......
Upvote 2
OP

hope this will help for correct identification .... for img3 on the back where it is zeus on the left there is flower and i cant find on internet same coin

any idea on the img3.jpg i have seen many similar coins but not like the one that i have ?
Upvote 0

hope this will help for correct identification .... for img3 on the back where it is zeus on the left there is flower and i cant find on internet same coin
Click to expand...

This is why it’s important to also post weights and diameters for identifying unknown coins.

With those metrics, the first coin is obviously not a tetradrachm. I would assume it’s a drachm (one quarter of a tetradrachm). Tetradrachms of this period in typical circulated condition would usually be around 17g although there are variations with exact date of issue and also between the many mints throughout the empire.

A drachm would be a quarter of that… a little over 4g but occasionally just below 4g, even if not substantially worn. Yours, at 3.18g is outside the usual range, but not impossibly so. It’s also possible it might have been ‘clipped’ (in contemporary times) to dishonestly remove some of the silver.

The third coin is bang-on typical weight and diameter for an early Alexandrian tetradrachm, but the second one is unusually light… although, again, not impossibly so. Again. ‘clipping’ is a possibility. Dimensions varied considerably, the flans generally ranging from about 26mm (on a thick flan) and reaching up to about 37mm (on a thinner flan but to the same weight) at the end of Alexander’s reign and through to posthumous issues still bearing his name.

I haven’t seen that particular ‘flower’ emblem either, but I wouldn’t worry too much about that. They’re generally referred to as ‘mintmarks’ but the truth is that there is uncertainty about what, exactly, they signify… and there are a myriad of variations. Emblems for town/cities where mints were located (there were a lot of them)? Identifiers for moneyers authorised to produce coins? Symbols used by particular die engravers? Some coins have them and some don’t. Sometimes the city/town name for the mint appears as well in Greek characters, or as an abbreviation, and sometimes not. Some coins have neither.
Last edited: Mar 8, 2022
Upvote 4
You must log in or register to reply here.

Old iron found in Central Florida, on a hiking trail with cypress logging and turpentine history.