Can anyone help figure out the monogram signature to this etching

I think it is a wood block PR

I think it is a wood block
print.
Upvote 0

I see ACDA if that helps
Upvote 0

The foot ware is unique, I would think an Oriental artist.
Upvote 0

Can’t help with the artist, but interesting footwear indeed. They look like a version of Japanese ‘geta’, although with a lot more ridges, but I think they’re home-made ‘tyre sandals’ (tire sandals for American viewers) which are made from discarded vehicle tyres. Very popular in impoverished countries in Africa like these examples: 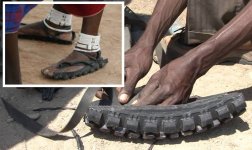 Obviously that isn’t an African gent and we’re looking at a peasant or farmer from elsewhere. These sandals were also made in Mexico as ‘huaraches’ and in Asian countries such as Vietnam, where they used tyres discarded by the US Army. Probably other places too. They were popularised in Vietnam by Viet Cong soldiers, leading to them being dubbed ‘Ho Chi Minh sandals’ or ‘Ho Chis’ by Americans. I could believe the hat to be Vietnamese too, but together with the striped long-sleeve shirt, waistcoat (vest) and cheroot, I’m thinking Mexico.
Last edited: Apr 12, 2021
Upvote 0

PS: I would also think it's a woodblock or lino-cut print and probably circa 1950s plus or minus a bit.
Upvote 0

I isolated the signature in photoshop and searched it in google images, but nothing definitive.... 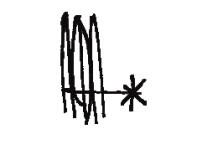 Thank you guys for all the effort and help
Upvote 0
You must log in or register to reply here.

Anyone seen this before?

Any ideas on this coin