I've bored y'all many times already with the history of the land near my house that I've started piecing together. I started finding a bunch of really old hand-forged nails, as well as some heavily oxidized iron-bearing rocks that are very much out of place. A couple of professors from local colleges are trying to help, but no luck identifying them so far. I do know, according to an 1864 Civil War map from the Union Secretary of War, that there was a house and a mill on this property at that time, that appeared to be still standing as of 1955 (from Historic Aerials).

So my mystery is this - on the attached "map" I compiled, I found a terraced area on a slope between the house and the mill. There does not appear to ever have been a structure built there.

Anyone have an idea what this terraced area might be? Farming? That would seem weird, as there's so much flat land around, but I guess it's possible. Maybe a mining operation of some kind?

Any help's very much appreciated! 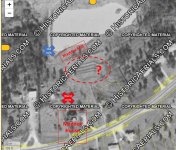 You mention Mill? What type of mill? Was it water powered or steam Powered? What county is the map. Go the Sandborn Insurrance maps. Just type in Sandborn Maps and got to GA. Then the town or county.
Last edited: Jul 6, 2021
OP

Hey Tony - thanks for the response. Those Sandborn Maps are great! Unfortunately, they only have incorporated cities and this was considered way out in the country back then.

In terms of what kind of mill, it had to have been water powered. A stream and underground springs were dammed up into a little lake and the remnants of the mill were right where the spillway back into the creek would have been. As for what type of mill...no idea. The Dekalb County Historical Society knows nothing about it. The public archives are still closed, so no luck going there.

One of the iron-bearing mineral chunks I found is likely arsenopyrite, which can be associated with gold deposits. And this part of Dekalb County does actually have a small gold vein, although I don't think it's ever been successfully mined. The fact that I found this mineral chunk on its own, covered in oxidation, leads me to believe it had been mined and then fell off a truck or buggy, etc.

I'm pretty sure there was a blacksmith on the property, based on the things I've found. But there's no reason they would use something like arsenopyrite as a raw material. And even if it's pyrite, which a couple of the professors are thinking it's definitely NOT, it's not abundant enough around here to serve as a raw material either.

Sometime genealogy records reveal property resident's jobs. Do you have any past resident's or owners namues you could look up free on rootsweb or familysearch? Sections of wills are quoted that give invaluable info on people, their lives.
OP

GoldieLocks said:
Sometime genealogy records reveal property resident's jobs. Do you have any past resident's or owners namues you could look up free on rootsweb or familysearch? Sections of wills are quoted that give invaluable info on people, their lives.
Click to expand...

Goldie, of course, great idea! Our county library gives us free access to ancestry.com and I used it to find the owner, John Maddox, in the census. But I didn't think about those other avenues. Thanks!

So, if you have found a place not publicly well know or not discovered, best to keep it to yourself before someone else scurries there ahead of you.
OP

SusanMN said:
So, if you have found a place not publicly well know or not discovered, best to keep it to yourself before someone else scurries there ahead of you.
Click to expand...

For sure, Susan. I think I probably have it better than I realize with a space this big, full of history, that nobody else is hunting.

I made a few more finds last night. I am 70% convinced that the people who were here in the 1800's were looking for gold. They never found it, to be sure, but the things I've found, and the types of rocks found on the property, lead me to believe they were trying to find it. This was the height of the gold rush in georgia, and even though there is only one documented instance of gold being found in my county, I can imagine that without internet and tv, what else was there to do?