A friend and I purchased 2 claims from John a while ago . Over the weekend we bought some mining equipment from him .
John really is a legend in this addiction that we all have, which is gold mining . Many here probably know him . I have learned from him in person and by searching some of his threads here .
There was a guy or two here that inquired about John some months ago. John no longer has the internet which is why you don't see him here.
I asked him last weekend If he minded if I gave his phone number to anybody here who might want it . After some convincing he agreed to it. He is still dealing with some really tough physical ailments amongst other things BUT he still has a lot of fire left in him and no doubt would like to hear from some old friends.
I wish I would have met him while he was actively mining. Let me know, I could P.M. you his phone number .

Brett, Wish John healing of his physical ailments. Many thanks for the sharing of his wisdom and experience on this forum as well.

Thanks for the update -- hope he gets back online I miss his knowledgeable posts.
Good luck with your new claims and equipment.
Cheers Mike

Thanks Wiggler for the update on John, my long distance friend.

Great guy, fountain of knowledge... One of the guys I have followed since the day I joined T-net. I wish him well!
B

Hoser is cantankerous, sharp tongued and abrasive...truly miss his presence online. I would say he has forgot more than most will ever know about mining but he doesn't forget anything.
Hopefully he will get back on these forums someday, I miss his input.
R

Brett THANKYOU for the update on Hoser ! I've been trying to reach him for sometime now and I correctly assumed that was John's situation ! We all want to wish for John's well being &safty !

I actually looked him up about three weeks ago to make sure his name hadn't turned up in the paper for sad reasons.

Saw he had his claims in order and no OBIT.

he and I have butted heads online for years lol..

But we have had great very friendly conversations via private ha ha .

He was trying to head down this way three years ago or so. But, even then he couldn't travel far or well.

Wiggler if he doesn't have anyone near by helping him out make sure to let me know.
R

GW if I'm not mistaken John's son or son's live with him..... or they used to before the fire's !
OP

So I was going through a couple of bins of misc. parts that I got from Hoser John . In the bottom of one I found about a cup full of black sand and leaves and dust and dirt . I thought to myself .... might as well pan it out . Glad I did. It kind of got my springtime juices flowing ; ) 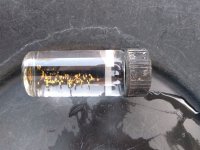 That is classic and it brought a smile to my face this morning!

Gone, With the Wind

Nothing better than a classic Hoser John "sic sic sic" comment to brighten up the day...

SchoolOfHardRocks said:
Nothing better than a classic Hoser John "sic sic sic" comment to brighten up the day...
Click to expand...

Anyone have any update on John?
You must log in or register to reply here.

Question for the pros