Hey guys I haven’t been Metal Detecting that much because it’s too cold and down in the south if it’s in the 30s we don’t do it if it’s 97 will be out there until we almost have heat stroke lol So not having much to do I was sitting in my office and I realized that I haven’t looked into my so-called piggy bank when I used to try to fill it up with clad and through time of course it got less and less of clad and more of silver buffalo nickels vehicles silver dimes silver quarters you get what I’m saying.So I looked in there and yeah it was exactly what I thought it was gonna be a lot of things that I don’t know what they were nickel sized but not really sure sometimes that had black patina on them with the “one dime” but I really wasn’t sure whether it was are you seated or not so I went on a coin chase I cleaned up two of the dimes and they were barbers ok cool then I started looking at all these red and green nickel looking things and I said I’m going to get me those Andrea’s pencils and learn how to clean these coins up well I have a past of ruining coins because I want to know what the date is which happened to me with a five cent piece with rays and being totally green I wouldn’t of had to do anything to it because it was only so many so I took a Brillo pad to it I know it’s like running your nails across a chalkboard 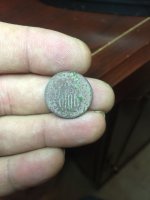 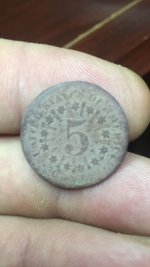 I know it kills me too and I’ve never found another one so years of going past and another wiped off any patina but there were these coins that I didn’t know what they were and having my new pencils I went at it. I just started working on this one nickel with my pencils and I started to see the outcome of what might be a 5 omg!! What did I just find. Well I looked at it as if I didn’t know I had it why do I have to lose and I did electrolysis on it never did it before but Im a gambling man so I took a gamble and it turned out like this BEFORE 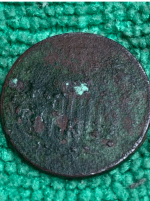 Well now I am on top of the world I want to do it to everything that I put to the side that I didn’t know what it was.

So I’m feeling real good (This is why I was a bad gambler and lost a lot of money) because my last great find was a War of 1812 US coat button. I asked for advice on what I should do and then vice was leave it alone you got to only ruin it, But I just got these pencils so I have to see. This is what it looked like when I found it 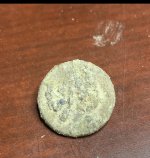 And this is why it was after my pencils 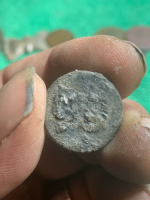 I totally ruined my button I’ve been on a great streak of War of 1812 buttons and I had to play with it my favorite one just like a grandma school when I kept playing with the fire alarm and I kept playing with it and then I pulled it ugggh!!!!
BUT WAIT there’s electrolysis now OH GOD this is a recipe for disaster but I went for it I watched it cook and at 20 minutes I was noticing it was getting a little smaller so I took it out and this is what I saw! 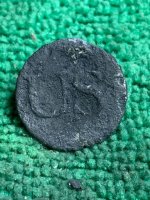 The most beautiful thing I’ve ever seen in my life I almost had a tear in my eye.
If you’re not a gambling man I would say do not do this but if you’re a knucklehead like me sometimes you win. I appreciate y’all looking and hearing my story

Couple shield nickels....COOL!!!!!! Back in my coin shootin days I've only dug one shield nickel ever. they don't come up often in my neck of the woods, young country out here.

Nice. You know as many CW sites as I've been on I have never found a really early 5 cent piece? Trimes, yes, half dimes, yes, dimes, yes, 5 cent nickels, no.
OP

smokeythecat said:
Nice. You know as many CW sites as I've been on I have never found a really early 5 cent piece? Trimes, yes, half dimes, yes, dimes, yes, 5 cent nickels, no.
Click to expand...

Yup that makes two for me I’m blessed and I’m lucky the Pewter button came out good I would’ve been crushed
You must log in or register to reply here.