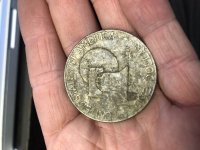 Dang! That thing sure looks like it could be a 40%. It doesn't happen to have an S mint mark just above the date, does it? It still wouldn't mean it was silver, but you can probably tell better than I can from the pic.
I think they made around 15 million 40% silver Ikes ascollectibles, sold at a premium, not for circulation. It's possible one could have ended up in a pocket then lost. Just a thought.
Check the rim for a clad edge.
Edit: correction, they only made just under 5 million uncirculated 40% (not proof) S mint 1976. And no clad in S that year. So an S mark would mean it was 40%.
Awesome find either way.
Last edited: Feb 27, 2020
OP
T

It’s a Denver. I am happy either way

Never found one before, Taladeganite. Good going for finding one!

Even when their not Silver - digging Half Dollar and Dollar coins is always a thrill !

Dang those are hard to find congrats!
B

Funny story when I was a "newbie" with my detector me and my wife were searching an old church. I had asked her to cover the sprinkler heads In the grass so they wouldn't ring while I swung over them with my detector.Yes, now I know it would have never worked anyway. Anyways my wife scoops something up after covering a "sprinkler head" with her hand it was an IKE dollar laying on the surface, it was lined up perfectly I swear lol you cant make these things up