Not sure how many other WI prospectors are on here, but I was wondering about sluicing/panning in Plum Creek. It seems that this is the primary gold spot in the state and I have never been there. I guess my primary questions are, 1) Is it worth the nearly 4 hour drive, in the sense that you are likely to see at least some color regardless of how small it is (assuming I at least half-know what I'm doing)? 2)Does it matter where you are on the creek (besides obviously digging at likely gold dropouts)? NOT expecting anyone to reveal a secret location, just in general . . . .
I'm not sure with this being the most well known area in our state (and there are VERY few of them here) how picked over it is. Time and money are very elusive these days and I would sure hate to throw away either!
Thanks in advance for anyone who can chime in! Also thrilled with any other thoughts about, or locations in, this sad gold state

1) In my opinion it is worth the six hour drive.

4) let me know when you are going. Maybe I can meet you there if you like.
OP

Thanks Duckshot, I appreciate the info and will absolutely let you know when I'm going! I don't have a ton of experience so that would be nice to have someone who knows the area! Have a ton of equipment, just need to use it and build the experience.
A

If Plum creek or other area creeks have areas of exposed bedrock bottom or crossing them then those areas would be good starting spots for prospecting on your own. Clean out holes or cracks in bedrock in or near the creek. That at least is what I would try. Old gravel pits may have steep exposed sides. Sample them if you can find an area that has dark or black seams or where you can see iron staining. My brother in law knew or heard of some finding gold in one in the western part of Wisconsin.

Plum Creek was mined commercially in the 1800's, and the part they mined then has been "restored"

.There are large flagstones on the bottom, but they were placed there. If I can see the creek from the hiking trail, I don't bother. Elm creek which empties into Plum creek right inside the park is better than Plum and much harder to access. Can't use a saw or machete. Gotta wear deet and just plow your way through heavy brush.

Can't dig outside the creek either. When you stop at the park station the ranger can show you a vial of finger-picking sized nuggets that were collected from a survey (in 1986 iirc). I think the surveyor probably used a metal detector to find those outside of where you and I can dig, but I really don't know and the ranger would not say.

If your in a good spot, you'll see 10-15 colors per pan. Lots of rounded gold there that won't stick on a miller table. The gray heavies in the pan are reidite zircon. It's found in 4 places on earth and 3 of them are meteor impacts. There are also diamonds around. The blue rocks are kimberlite. Day pass is $5, season pass is $30.

Laura Engles Wilder grew up on Plum Creek, and it might have been the basis for the kids gold mining episode of Little House.
D

That heavy grey sand is some crazy looking stuff the first time I saw it. Definitely a curve ball, there is nothing like it found in any of my purchased pay dirt.

Hey Capt. Nemo- What say you and I make a two night sluicing expedition to Nugget? I could pick BenArmstrong up on my way up and we can meet you there. Think it over.
OP

Thanks Duckshot and Capt Nemo for the info! I'm definitely excited to see some WI gold, nothing like playing in the dirt! I'm also going to try Black Earth Creek which is pretty close by, apparently there has been some fly poop gold found in there. Just waiting to hear back from the DNR, since apparently you need the permission of the property manager on DNR managed land. If a trip happens to plum creek, I have a bunch of equipment if needed, gold hog sluice, GGT Explorer, and more. Man, I wish our laws allowed the gold cube on site!
OP

Thanks arizau, I will absolutely check out any of those I come across!

Duckshot said:
That heavy grey sand is some crazy looking stuff the first time I saw it. Definitely a curve ball, there is nothing like it found in any of my purchased pay dirt.

Hey Capt. Nemo- What say you and I make a two night sluicing expedition to Nugget? I could pick BenArmstrong up on my way up and we can meet you there. Think it over.
Click to expand...

If you see a blue Escape in the first parking lot down the road from the ranger station...It's me!
D

Capt Nemo said:
If you see a blue Escape in the first parking lot down the road from the ranger station...It's me!
Click to expand...

Now that I know what you are driving I am sure to run into it.

Just kidding. I'm the guy camping alone with the wooden drop riffle and the duck shooting hat. Stop over if you see me up there. I'll cook lunch.

Were you there in August of 16? I met one guy that had a wooden sluice with some expanded and moss. I was peeling out of the wetsuit about the time.

Here's where I was digging. Someone else dug my hole and built the dam. I like the slab of concrete by the bridge, it makes a nice seat for panning. Good color on the left side where it calms down. 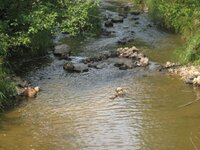 I'm guessing the water is probably a little high at the moment? I know here in southern WI it's still pretty high on the rivers and creeks. When is the flow usually best? Also, an update to Black Earth Creek (which was the other area I found that had reported gold), the DNR said they would NOT be OK with gold panning

due to it's status as a trout stream. They didn't want to give permission since they wanted no disturbance of the creek bed. They did however give me permission on another creek nearby to where I live. I highly doubt I'll find anything worthwhile, but I'll give it a try anyways. I've got the option of two sluices that don't require classifying so should be able to get through a good amount of material.

Never tell the DNR anything! If they don't know, they won't be looking!

I used to pan at the Tomorrow River/Waupaca River by the HWY 10 rest stop. When it was a rest stop, the river was alive with trout, suckers, minnows, and crayfish. Then they closed it, and the DNR came in and rebuilt the stream for trout. Now the river is dead! They did the same at the Little Hope Dam. The dam/millpond provided food and oxygen for all the downstream fish. Throw a handful of fish food in the stream, and it would explode with fish! Do it now...nothing!
OP

Yeah, it's ridiculous. Also, it specifically says in the memo they released for recreational gold panning, that you can't pan in a trout stream from Sept to April to protect the spawn (so the obvious inference is that it would be OK May - August), so they are already making sure the trout are not impacted. Apparently they should just say no trout streams at all since they won't allow it regardless of what their rules state already. It's pretty frustrating because digging in the creek bed is not going to have any kind of significant impact, I always fill in my dig spots, and I doubt anyone would even notice that there had been a disturbance. They are just arbitrarily enforcing rules. The DNR is comprised of politicians and "biologists" with hyper-eco agendas that, unless it brings the State significant money, would rather no one do anything, anywhere. This is Wisconsin! There's what, maybe a couple of dozen people in the whole state who pan for gold? There would be next to no impact from those people.
OK sorry rant over.
The only reason I reached out is I had nightmares of that truck rolling up and them taking all my equipment and vehicle (which I have no doubt they would do).
D

Capt. Nemo, first time I went there was 2016, but it was mid week before Labor Day in Sept. Also I don't use moss.

Ben Armstrong, it's probably best to have a healthy sense of respect for the Dictitorial Never relenting Rigime.


Edited to add, I got a nice photo of two fellows using a Tee Dee sluice under the overlook. They forgot their shovel. I felt bad for them and wanted to stick around to help them out and sluice some more myself but I was on a schedule. Can't find the photo or I'd post it, pretty cool with the overlook in the background. And yes, I've found gold under the overlook.
Last edited: May 10, 2019

Here's some pics of the gold you'll nail there. Note the heavy gray reidite sand in the second pic. 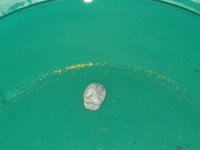 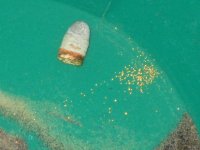 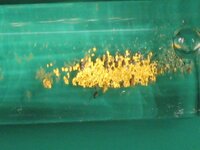 A map and the rules. 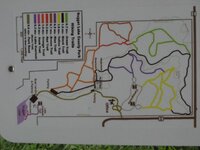 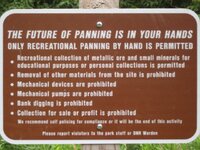 Thanks Capt Nemo! That gold looks awesome! Hoping to get over there soon!
D

With all the rain you might want to wait till it dries out some. I was panning in Plum when it was flowing about average and it started raining. Creek turned brown and came up about 2"-4" in about an hour of medium-light rain.

I'd rather it be too dry to sluice than to have to try and get pay dirt out of brown rushing water. There is always enough water to pan.

If you call the ranger station before you leave home they can probably tell you if the creek is high or low.
OP

Thanks, good advise! I would not want to drive 4 hours only to find out the water is too high. I Probably won't have time anyways for another few weeks. Hopefully the rain will have simmered down by then. In the Madison area it just dumped a bucket a little while ago.
You must log in or register to reply here.

Why are California gold claims so expensive?