White is for a void signal, go by arrow and small dots, rather than the circle. This was the very first GE map you posted.

You guys are sure you're not getting anything in the orange circle?
Click to expand...

Look north of your orange circle.

I pulled the plug on site 1 for now because at 13 ft we scanned the bottom and all around the hole with a 2 ft PI coil and got nothing. I guess it's possible I detected a pocket of moisture with the resistivity meter. I don't know. Here is a more vertical point of view of that hole. 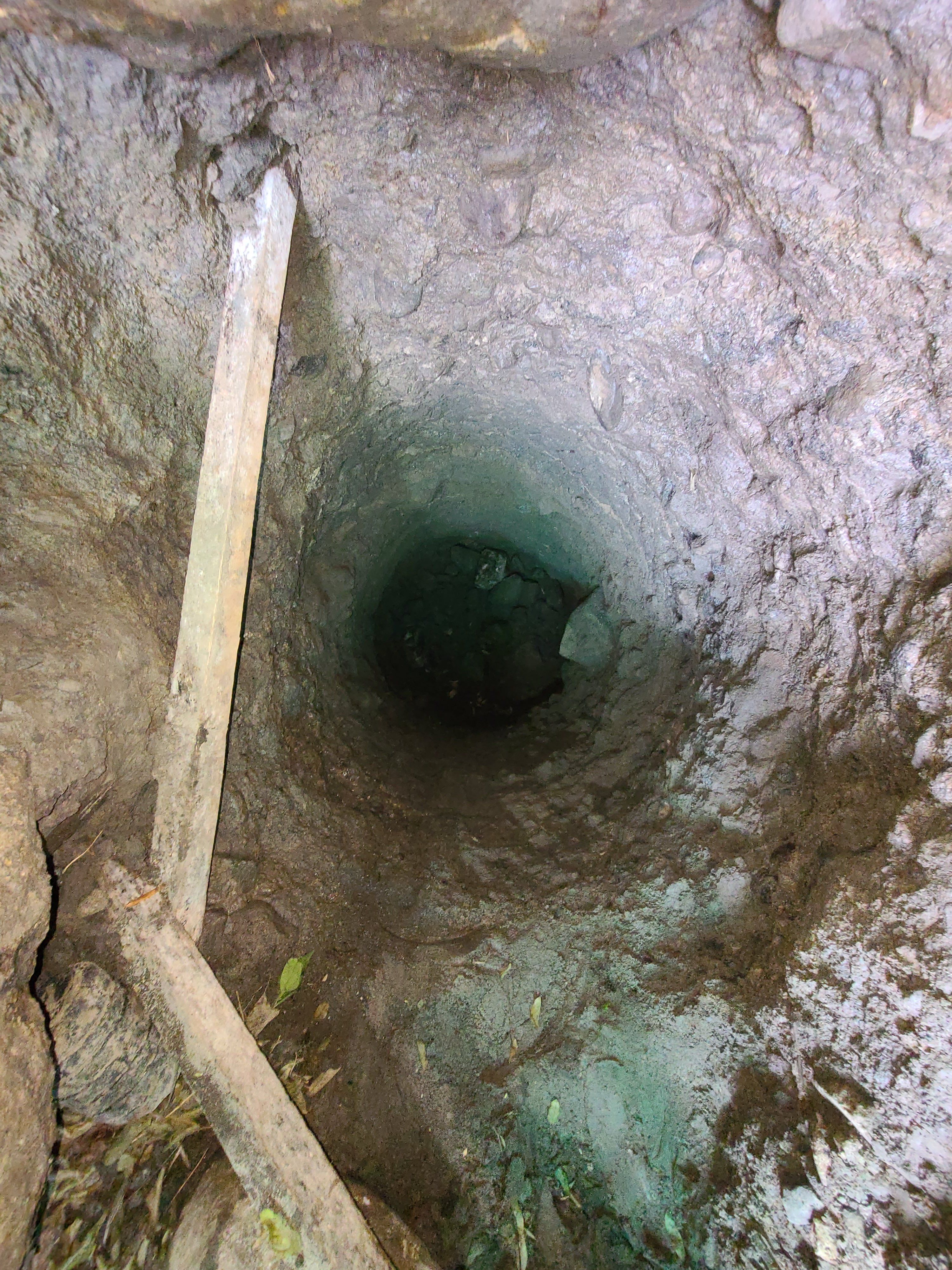 Now we are moving forward on site 2 (greener area). We spoke with the owner of a backhoe today. He wants a minimum 26K pesos for the work. 6k for transport then 2.5k per hour, minimum 8 hours. It probably won't take that long but so be it. I can't argue too much about that price. We just want to move the boulder out of the way. I believe this backhoe can do the job. 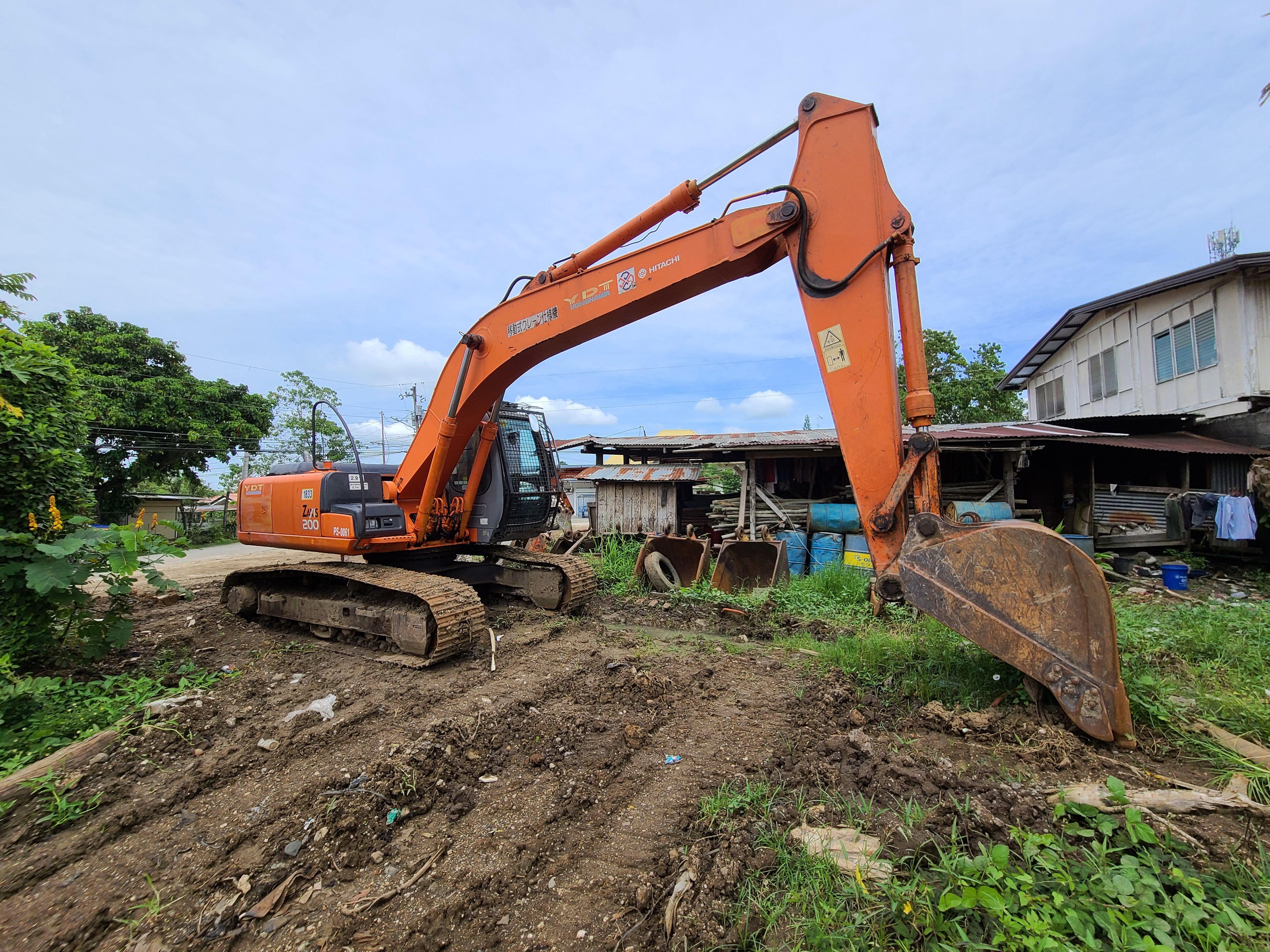 Tomorrow we will run a wire about 600 meters through the forest so we can pump out the hole and see how stable the walls are under the boulder since its been 2 years since anyone has dug there. If we feel comfortable then we will just proceed manually for now. Good news is we have the full support and protection of the local government. I should be able to check all the points you guys marked. But only with a 1x1 meter PI coil so hopefully there is at least one shallow object. Thanks again to everyone who contributed their input.
Last edited: Dec 5, 2021

I thought before, checking around hole, there might be mineral or even mineral salts with moisture can be detected by electronic equipment. Checked again using a simple archaeological search, it will be the green. Not all these hits will be Japanese and could include non-metallic objects. You need to sort out the results.

Still not getting anything on your hole. Have not yet finished all the maps for void search (white) there could be more.

All I am seeing is ferrous, junk metal.

Checked another 2 maps without any void hits, none at all. Not sure yet if I'm getting all of them checked.
OP
L

Red_desert said:
Thanks! This zoomed in map was a part of previous map.
Click to expand...

Red_desert... Look at this. Today I got the coordinates for my hole at site 2. You were actually right on the money with one of your hits. Nice. You were getting a gold hit here, correct?

Do you guys see anything in these photos? 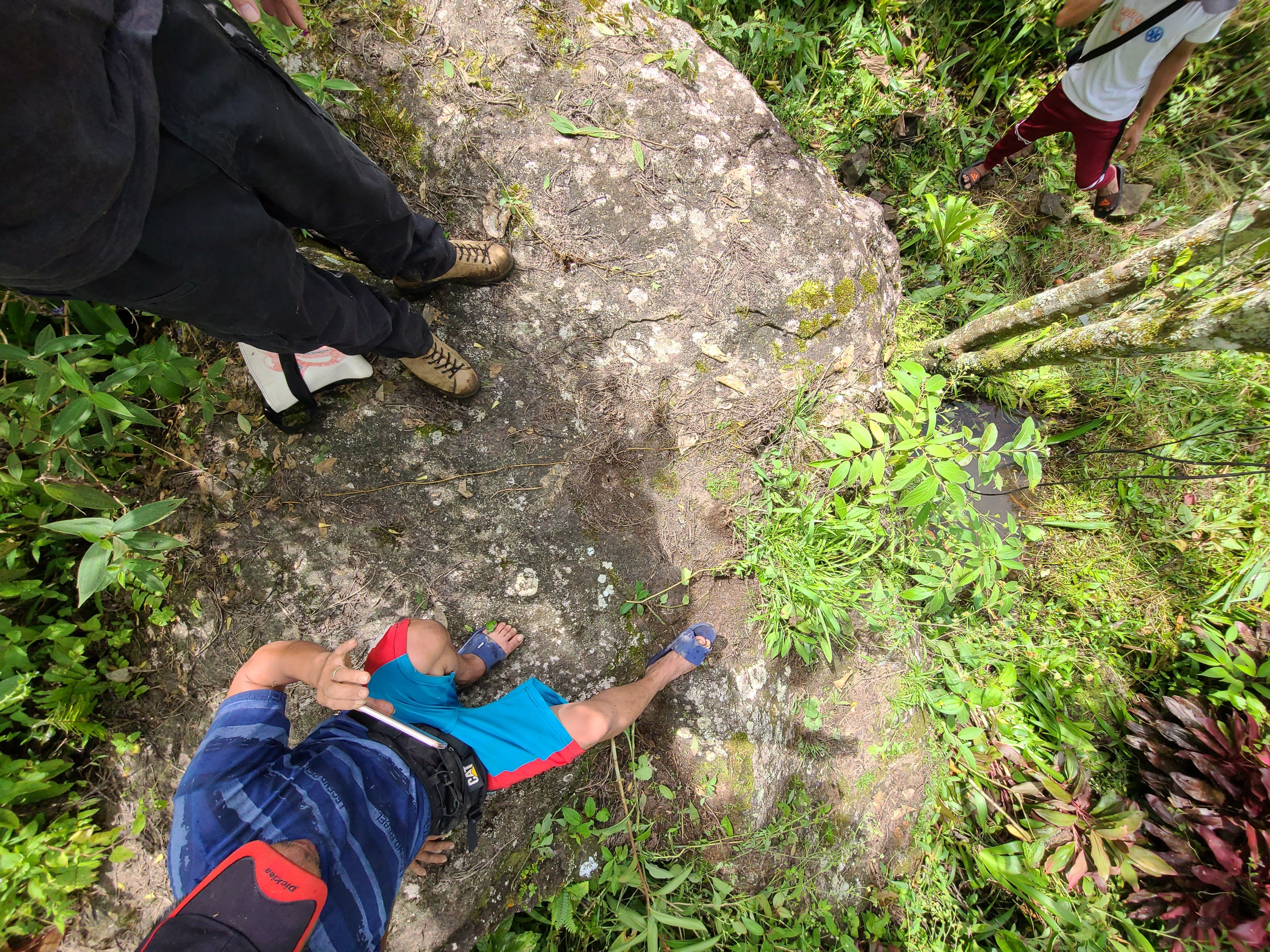 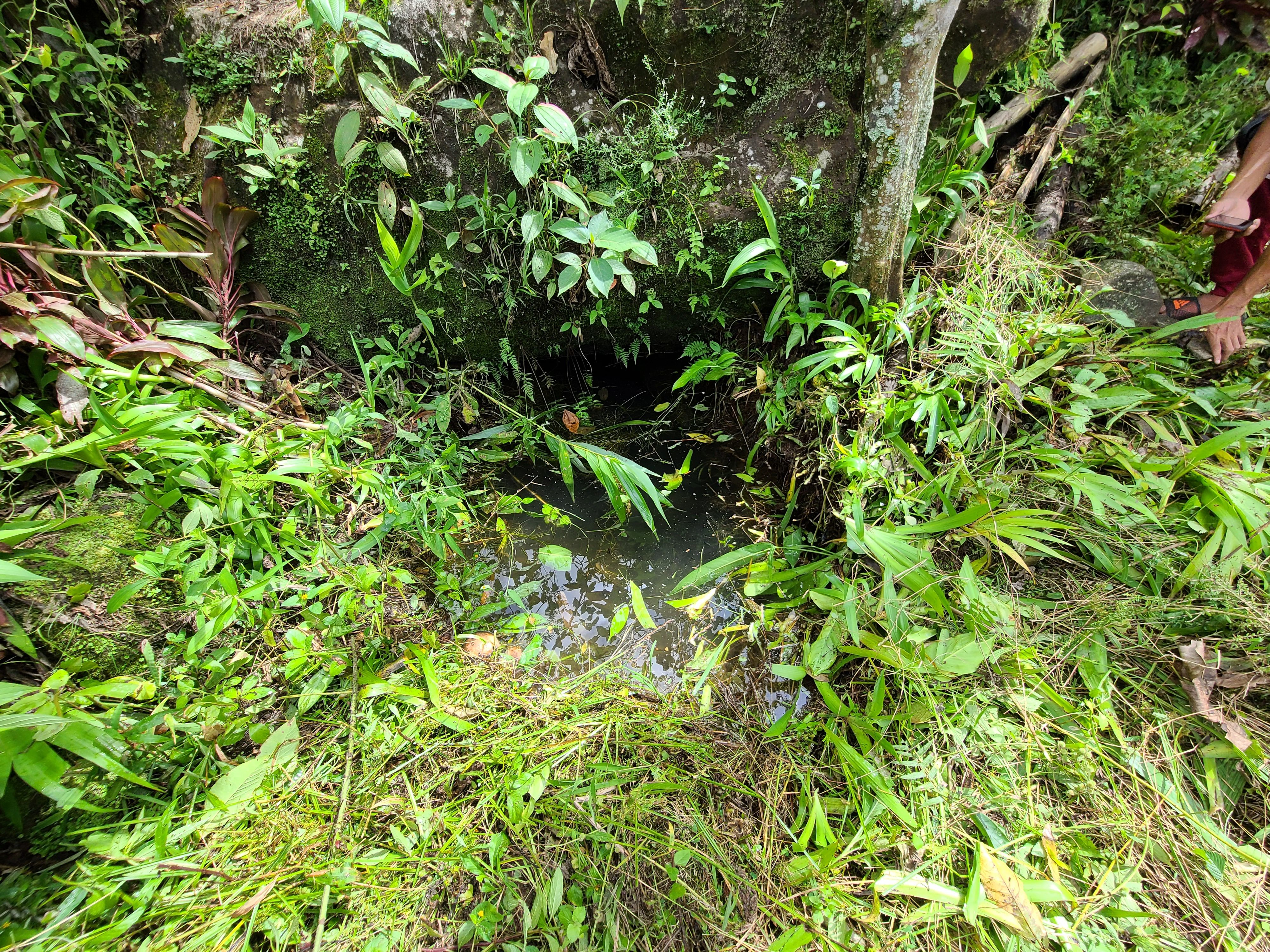 The circles are where I see AU signals. on the pic with blue arrows, look for exposed hardened cement, or ceramics, and see if those are markers.

Just doing a quick search came up with a few mini swords with scabbard. Good luck on your search. In chinese it's called a 青龍寶刀 and it's generally sold in markets on the streets as a souvenir. @Red_desert

Yang Hao said:
Just doing a quick search came up with a few mini swords with scabbard. Good luck on your search. In chinese it's called a 青龍寶刀 and it's generally sold in markets on the streets as a souvenir. @Red_desert
Click to expand...

The majority of people in the Philippines are very poor. On a level of poverty that most in the western world can't even imagine. The relevant person may have shown Red_desert this sword and claimed that they found it based on his results simply just to keep him focused and working hard on the project. Just to hang on to any glimmer of hope that Red_desert could help him be successful, or even to cultivate the possibility of Red_desert sending a little money to fund the project. The sword could be a modern souvenir from China or the one's you found online could be replicas of something actually from the past. A lot of the loot here came from China.

Thanks! A mini sword. No, this dowser never would have used it to get funds. It was found inside a Japanese cave with a carved stone marked. The same dowser found a beach site with a cement square entrannce going down inside a room. He had to dig all the sand out first.

Down in the beach room was a couple cement sculptures, the large shell and coral. I've seen photos of Japanese stone markers of a shell carving holding a pearl.

He really didn't say anything about the mini sword except finding it in the cave entrance. The sword parts dug at the Japanese camp were engraved with Japanese letters.

Looking at the shell now, it might be a rock carving. Do a couple cement rocks found with it, might be a marker. Maybe I just assumed the rocks were cent because a cement mixer in the bottom here. Next question, woild locals have made a hidden room with an entrance on the beach? It was south of Japanese camp right on the beach. I'm beginning to think cement probably would not carve very well, so maybe all are stone carvings.

Red_desert... Look at this. Today I got the coordinates for my hole at site 2. You were actually right on the money with one of your hits. Nice. You were getting a gold hit here, correct?
Click to expand...

No, if it was the red arrow search that is Japanese specific and could be almost anything of Japanese origin. White circle/arrows a void search which can be anything natural especially caves or excavated holes and for tunnels underground.

Yes, I see where I'd got a lot of dowsing action right at the red pin zoomed in coordinates. Red arrows, line and dots. Plenty of signals, must be why you started digging there.

Did some searching on the Internet and the Japanese make the mini swords also. Looking at the design on this one though, you would think it was Chinese.

Red_desert said:
Did some searching on the Internet and the Japanese make the mini swords also. Looking at the design on this one though, you would think it was Chinese.
Click to expand...

Showed your photos of the mini toy sword to a few people here in China who know more about toys than I do. From photos provided it looks very much to be manufactured in China. It is Chinese characters on the scabbard and was most likely made during the 70-80s(guessing it's around 30-50 years old).

For example from what I remember in the early 1990s while living in HK, there were lots of people from the Philippines working in Hong Kong as Domestic workers and construction workers. They would often send items back their country.

It's in great condition btw. The question is why it was there. Kids playing around the cave possible?

I thought the letters on mini sword, since you mentioned it, do look like Chinese. It was the dug metal objects were supposed to have Japanese letters. The photos are not close enough to see any letters (if they are there). The stone had what looks from photo to be a carved triangle, it was near a cave entrance. Mini sword could have been lost by children playing.

The metal objects were dug at the old Japanese camp that had buildings on it.
Last edited: Dec 8, 2021

Here, think this photo should be a slightly different view angle of stone near cave.

so full of electricity he could locate buried gold, silver and copper