Just wanted to share this land find with the community before it sells (listed on eBay right now). I'll let the audience make their best educated guess. I don't want to reveal the details as it would taint any knowledgeable guesses. 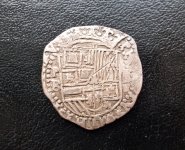 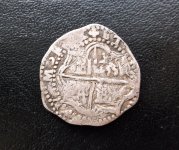 Since no one guessed, I'll reveal the ID. It is a Potosi 1 Reale minted under the reign of King Phillip III. Typical early Potosi pieces with an assayer of "B" are attributed to Juan Ballesteros who served multiple assayer tenures. But King Phillip II died in 1598 and the only Ballesteros that served during King Phillip III's reign was that of Hernando. His tenure was only 5 years and consequently pieces that didn't suffer the ravages of sea salvage along with clear strikes are relatively rare.

Cool! Thanks for the info. Interesting.
You must log in or register to reply here.