I am sad she is gone

I still think it is foolish to honor someone because they were born. I think King Charles is not a person to praise. He did Diana wrong and I also believe a lot more of his wrong doings will surface

Peyton Manning said:
Did she ever have dirty fingernails?
Ever clean a toilet?
Ever worry about having work so she could feed her kids?
Ever deny herself things to see her kids have something?
Ever make due about clothes, a car, a house?
I’m saying she had it all for nothing
I care more about the normal people who struggle everyday.
Click to expand...

She survived WWII German bombing in London and served in the British military, how about you, where did you serve?

She was an amazing royal and person. No scandals with her, but cannot say that for some of her family members.

Gare said:
I am sad she is gone

I still think it is foolish to honor someone because they were born. I think King Charles is not a person to praise. He did Diana wrong and I also believe a lot more of his wrong doings will surface
Click to expand...

Prince charles was screwy on many levels and now he is king. Not my king, we have our own screwy presidents. But they always have said, democracy is messy.

There was speculation in the past that Prince Charles might choose to be George VII (avoiding comparisons with previous King Charlies who have a bit of a chequered history) but Charles III has been confirmed.

There is a long tradition on our coinage that each monarch’s portrait faces in a different direction to their predecessor, so Charles will face to the left if he follows protocol. There was an exception when Edward VIII insisted on facing the ‘wrong’ way because of vanity relating to his bald patch and comb-over, so pattern coinage was prepared showing him left-facing like his predecessor. But he abdicated without any coins being issued in his name and the tradition resumed as if he had faced right.

The other tradition is for the regnal titles on coins to be in Latin (for Charles it should be Dei Gratia Rex Fidei Defensor), together with a latinised equivalent of the monarch’s name. So, James became IACOBVS, William became GULIELMUS, George became GEORGIVS and Edward became EDWARDVS. The issue didn’t arise for Victoria since it’s already Latin, nor for Elizabeth because it doesn’t really have a proper Latin equivalent. Neither the Palace nor the Royal Mint have confirmed it, but I suspect Charles will break the tradition to avoid being ‘CAROLVS’.
Click to expand...

The Royal Mint has shown the design for the first of Charles' coins... the 50 pence piece, which has traditionally been struck on an equilaterally curved heptagonal flan. Due to go into circulation before Christmas, but with commemorative 50p and £5 coins for the Queen with Charles' portrait to be issued before that. 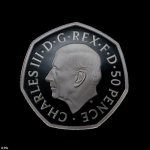 So, the tradition for which direction the monarch faces has been maintained, but the tradition for Latinising the name has not. Only the titles have been retained in Latin.
You must log in or register to reply here.