I am new to this site and have been digging for many years. About 2 weeks ago I had got permission to a where American troops encamped for a few months during the American Revolution. I found what looks to a be a possible hook? Maybe a latch? I'm unsure but have a feeling it is war related. Does anyone have an idea of what it maybe? The site was still wooded and not cleared out for farming. Don't suspect it being much later and most likely period. One of the pics included a measurement for size. It is iron and i did preserve it to stop it from further rusting. Thanks for looking!

it looks like a piece of a horse bit
could be as old as 1700s or could be as new as the last century, tough to nail when it went into the ground

never heard of a hoof pick, I'll google it.
G

I agree with ticndig although it may have been a combination tool with one end being a pick and the other a scraper. Here is a picture of a different type combination hoof tool.
It looks to me that your item could be Revolutionary War period but that is just a guess. Here is a link to picture. https://www.kenoticket.net/horse-hoof-metal-scraper-pick-vintage-possible-1930s/pd7980064 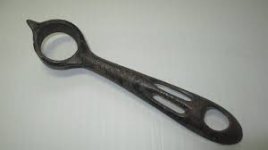 Nice find! looks old to me- nice tape measure too!
You must log in or register to reply here.

Button with letters LWV ,May be Lakenheath &Wangford Volunteers.