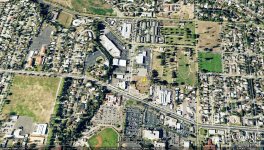 A plan to guide the excavation of the site of Riverside's second Chinatown won unanimous approval from the City Council on Tuesday. The council upheld a vote of the Cultural Heritage Board, rejecting four separate appeals filed by opponents of a medical office building that Riverside developer Doug Jacobs plans to build on the site at the northwest corner of Tequesquite and Brockton avenues.

Jacobs must pay for the excavation and preservation of the materials deemed worth keeping.

The 4.2-acre site is listed on the National Register of Historic Places, as a city and county landmark, and as a state point of historical interest.

Project opponents argued in their written appeals that the archaeological treatment plan does not require appropriately trained personnel and could lead to valuable materials being discarded.

"What I object to is having an archaeological excavation of any kind," said Jean Wong, who filed one of the appeals on behalf of the Save Our Chinatown Committee,.

Her group, which is suing the city over the council's approval of the medical office building project, wants a memorial park built on the site.

City officials said archaeological professionals will oversee the excavation and the intent is to save and catalog everything of value.

An outside archaeologist retained by the city, Peter Schulz, who is an expert in overseas Chinese sites, told the council the archaeological treatment plan is "completely professional" in his view.

Planning Director Ken Gutierrez said a separate plan will be coming to the council for displaying excavated materials and telling the story of the Chinatown.

Riverside's first Chinatown was downtown but had to move in the face of anti-immigrant sentiment. The second Chinatown existed from the late 1800s to the 1930s and was home for some of that time to hundreds of residents. Many came initially to work in the citrus industry.

A dig at the site in the mid-1980s uncovered hundreds of artifacts the city now has in storage and an exploratory dig in 2007 turned up part of a building foundation but little else.

Councilman William "Rusty" Bailey said the city listened to the community and made changes to the archaeological treatment plan as first proposed to ensure that all valuable materials found on the site will be properly preserved.

For example, the city will hire an archaeologist -- at Jacobs' expense -- to review the materials independently for cataloging.

Councilman Mike Gardner, whose ward includes the site, said he didn't see what more the archaeological treatment plan could do.

"I think it does save all the good stuff," he said.

The oldest map I could find on this particular China town section goes back to 1895, The number 23 off Brockton Ave on the Sanborn map is the same area of a later day China town. Notice only one structure was here back in 1895, So China town appeared later maybe late 1890's or early 1900?

Plus, About 20-22 years ago dug up an 1913 Riverside Souvenir. It was a 59th Annual Riverside Grand Encampment Souvenir, Not related to Riverside china town but none the less an interesting find from Riverside dug up here in dusty Visalia.

If possible, Detect this area

Click on the link below, Should open up the 1895 Riverside Sanborn map and old China town area would be off Brockton Ave near the larger number 23 section 121.

Just noticed you are from Riverside and since you live here you can have the 1913 Riverside Souvenir metal I dug up 20-22 years ago. Just PM me your mailing address.

and Yes I would LOVE a dig from you THANK YOU THANK YOU !!!!

Send me a PM sometime and lets touch base..

Thanks John for last nights Internet conversion, It was good to catch up a bit and to hear you're still metal detecting.

I'll try and post the 1895 Riverside portion of Sanborn map below without the link, With school and other priorities it's been a while since I posted on the forum so I'm a bit rusty.

The china town would have been located off Brockton Ave beside area 23 section 121. Looks like not allot of activity took place here in 1895 except for one structure so maybe china town was here after 1895?

Thanks again and I'll send out the Riverside Souvenir this morning.

Ok, I just reread your post and noticd this is the second Chinatown which existed from the late 1800s to the 1930s. That would explain only one strucdture on the 1895 Sanborn map so right after 1895 the area was home for hundreds during the span of 30-35 years?

That place was open for ever and a day, before anybody cared about the historical aspect of it. It has been pounded over and over again, it’s has only been locked up for a year and a half or so.
OP

hey gang,
I went by the site last week, but wasn't able to post them till today so here ya go. 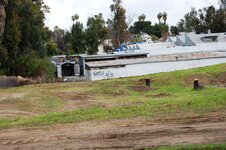 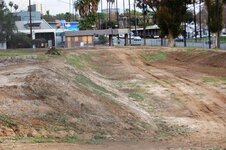 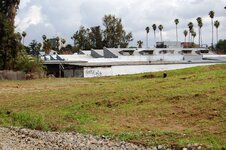 I just wanted to extent a heartfelt THANK YOU to Old Cal.... He told me, he was going to send me a souvenir and he was true to his word... and even more so. The packaging he used were 3 vintage treasure mags

.... So to Old Cal, I THANK YOU my friend, I will have the relic cleaned and then placed in a frame and take to work for all to enjoy.... 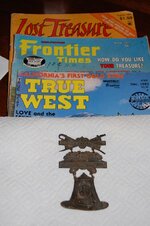 I'm curious abou that 2nd magazine from 1967. Can you post the pages that deal with metal detecting? Or is the entire magazine about detecting? Thanx!
OP

hello Tom,
Yessir Paul is ABSOLUTELY one of kind..... and I'm very grateful to have met him. The Frontier Times is a really coool mag, I have quite a few of them. They are ( or were ) apart of True West mag... Here is the table of contents for the mag in question 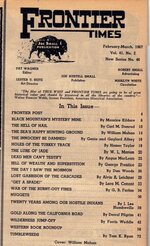 thanx for the scan of the contents page pegleg! Sounds like all the articles are typical for the period: treasure lore stories, and nothing to do with coin/relic shooting. But the article: "the seas happy hunting ground" catches my eye, can you post that article? What's it about?

Glad to hear the Riverside relic made it's way to your home John, It now is resting with the rightful owner especially since you live in the same area.

And thanks for the kind words John and your too Tom you guys are much too kind, You guys are the generous ones with the valuable information you two continue to share with us.

And Tom I can remember a time or two you gave me finds for my display you had dug from a particular Butterfield stage stop, Semi rare barber silver dime, 1862 civil war token and a gun which are still displayed along side the other cool relics and coins I dug from that site.

Also, To this day still have a few copies of the older magazines, Several from late sixties and several early seventies. They are boxed up somewhere and this morning dug up a few for the pics below, And came across a recent 2005 copy of (Eastern & Western Treasure) with Ron (Ca) on the cover swinging one of those Minelab boat anchors.

Thanks again John and and Tom for your continuous contributions to the forum,