Obsessed with researching this postcard and thought I'd reach out for some extra help. Dated 29 JUL 1924

I'm bouncing back and forth between Germany (I took a microscope to the posters and one mentions a lovely evening at Staatliches Bauhaus), Hungary (the handwritten message on the back), and Serbia (At first I thought Ada on the back was a name - like "this is Adalar and Ada" but after some research discovered a small area in the Belgrade area named Ada which has a large Hungarian population).

Sadly the photographer doesn't help much (Georg Lampe - Bad Reichenhall) but does make me lean more toward Germany, especially when I scoped in on the signs and made out Bauhaus, etc.

I've tried to do some research on the posters and even did some side-by-side research of the building they're in front of (particularly with Bauhaus which it could NEARLY match up with but is not).

I'd also love to learn more about the image itself. Was it common for families to hang out like this and have a drink (I love the glasses)? Any idea what kind of gathering this may have been or just a typical evening out?

Thanks in advance for your help! 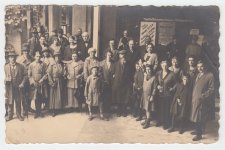 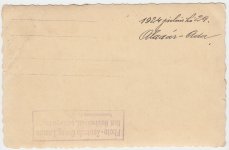 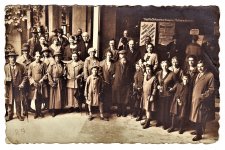 Looks to me like a bunch of folks who have attended a concert or some kind of musical performance. Perhaps a ‘works outing’ with family in tow.

Starting in 1920 the Staatliches Bauhaus began running “Bauhaus evenings” with lectures, concerts and recitals alongside their original function as a school for the arts. The date of 1924 would have to relate to the Bauhaus when it was in Weimar, Germany since it moved to Dessau in 1925 and then to Berlin in 1932. Quite how that links to a photographer based in Bad Reichenhall I don’t know, since it’s several hundred miles from Weimar.

The hoarding in the background says it’s reserved for advertising related to the venue and there are posters headed “Abend-Koncert” (evening concert) and “Bunter Aben” (more colourful evenings) in German. There’s a lot I can’t read because the letters are too pixelated when I enlarge your pictures, but the poster at the left seems to be headed “K??s?l-Gasistatten” which is a little odd since “gasistatten” literally means “gas stations”. At the bottom there seems to be an indication that there’s a bar at the venue.

However, in between, it says “Geiger Gyula” and then “Rudolf Laufer”. The word “geiger” means “violinist” in German and “Gyula” is a place in Hungary. Rudolph Laufer (also known as Rudi Laufer) was a Jewish concert violinist and later a band-leader who performed across Europe. He was actually born in Vienna, Austria in 1904 but I expect a bit of research might reveal that his career (or perhaps his musical tuition) has its origins in Gyula. He seems to feature on some recordings of Hungarian folk music.

He was rounded up by the Nazis in Drancy, France together with two other musicians: Frederic (Fritz) Steissel and Charles (Karl) Schifferes, and sent to Auschwitz concentration camp. Rudolf survived the ordeal and died in the Netherlands c.1990.

Rabbi David Jakob Matzner’s memoir from Auschwitz notes the arrival of the three musicians at the camp:

"Three professional musicians from Vienna had also arrived. Their instruments - a violin, an accordian and a guitar - were kept in the guard house, for often they were called to entertain the guards. Whenever music came from there, I thought that Schubert, Strauss and Mozart would turn in their graves had they known what murderous creatures their compositions now pleased.
One evening, the three musicians were permitted to play for us prisoners. An empty barrack had been prepared with long benches, with seats reserved for Davidowitch, Cohen, the capos, the kitchen personnel, and women from the office. There was singing, some dancing, a couple of instrumental and vocal solos.
Cohen had asked Rudi Laufer, the violinist, to play the Andante Cantalistene of Tschaikovsky's Violin Concerto. Laufer's violin sang in deep, sonorous tones, and silence fell over us. Men and women bent their heads, some with tears in their eyes. Deeper than ever before, I felt the loss of my life, the waste of hopes and ideals, of goals I dreamed of achieving. I thought of my parents, my brothers, my sisters, of the brutal destruction of God-given beauty and talents.
Rudi finished. Before applause could begin, his voice and features full of bitterness, he said, "I should have broken that piece of wood before they got me." Markiel, the shoemaker, peppy as always, replied, "What do you mean? We expect you to lead us out of here with this music. You are our Pied Piper."
Last edited: Sep 17, 2021
OP
D

I had a number of those research bits myself but you put it together in a way that really helped me learn more AND taught me a thing or two about laying out the research as well. Thank you for that!

"Kursaal-Gaststatten"
For the longest time, I thought it was "gasistatten" as well, which does mean gas station, but upon a closer look, I realized it was "gastitatten" which (more appropriately) means restaurants.

I found this about the word Kursaal: from German, literally: cure room, also a public room at a health resort or an amusement park. So some form of amusement (spa, venue, etc) restaurants near or at the place where Rudolph was playing. I was hoping it was a literal venue name that would help me pinpoint the concert itself!

Thank you again for all the time you put into this! I'm determined to learn more about it and this was very helpful!

"Kursaal-Gaststatten" makes perfect sense. I can only make out so much from enlarging your picture, but I kicked myself for not realising.

Apologies that I mis-spelled Rudi's name in some of the above. He used the spelling "Rudolf", as on the poster.

Note also that if you are doing further searches, there was another "Rudolf Laufer" (born 1883) transported to Auschwitz but he was murdered there, was from Bohemia, and not a concert violinist.
You must log in or register to reply here.