Treasure Aboard Luxury Cruise Ship About to Be Raised... S.S. Connaught

Treasure Aboard Luxury Cruise Ship About to Be Raised...
In the fall of 1860, disaster struck the S.S. Connaught on its second voyage. On the last leg of its route from Galway, Ireland, to Boston, Massachusetts, the ship started taking on water. The crew managed to stop the leak just as a fire broke out. As the fire raged, the crew-members struggled to lower the lifeboats, which were stored on the top deck. Suddenly, a powerful wave swept the boats away. Passengers and crew-members alike watched helplessly as their only chance of survival sank to the bottom of the ocean. Just as all hope appeared to be lost, a tiny boat appeared in the distance and came to the rescue. The crew assisted all 600 passengers onto the vessel. Soon, every open spot on the deck was full of people, with some men even grabbing onto the masts to make room. No lives were lost in this phenomenal rescue. But the same could not be said for the valuables aboard the ship... The Connaught was a luxury cruise ship and has been described as the Titanic of its era. As such, the passengers aboard the ship were wealthy, and had brought with them all kinds of valuables. But that’s not all. The Connaught was also carrying a large shipment of gold coins when it sunk. For 154 years, the ship has sat at the bottom of the ocean, undisturbed — and chock full of gold coins and other treasure. But that treasure will finally see the light of day this summer.
A shipwreck salvage company, Endurance Exploration Group, has been surveying the site of the wreck off the New England coast for two years. The size of the ship, as well as a few other key features, have the treasure hunters convinced that they have found the right vessel. Endurance CEO Micah Eldred revealed the plans to salvage the wreck this summer in a press release.
“We expect onsite operations to begin in July of this year, and are looking forward to putting salvaged artifacts on deck,” Eldred stated.
As the salvage progresses, it will be exciting to see just what treasure is discovered. The ship itself is a masterpiece, but the passengers’ valuables and the shipment of gold coins are what make this salvage effort a treasure hunt of epic proportions. 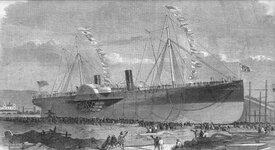 The SS Connaught had £10,000 in gold on board, Government money, taken on at St Johns, which was lost with the ship.... SH
https://www.facebook.com/Shipwreckhunter