I had a chance to visit yesterday with member kyphote at a site he is digging in the Virginia Piedmont. It has a clear Early Archaic and clear Late Archaic component to it. As far as I can tell, the hill he is finding the archaic stuff at has a layer under it where one of the ancient rivers dumped a layer of quartzite cobbles and quartz gravels. While currently buried, I imagine thousands of years ago enough of the rock was eroding out to catch the attention of the ancient knappers.

I brought home a few samples and quickly banged out a few field grade, "git 'er done" type points. The quartzite piece far left is a failure. There is a bad spot in the stone I failed several times to blast out, so it's going into the chip pile as a reject: 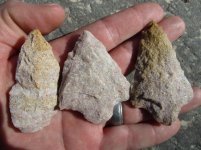 The quartz is a little grainy, but above average for the material in how it works. I love the "ice" look of it: 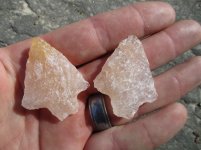 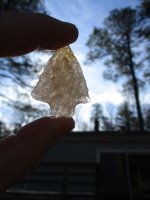 Nice workmanship on extremely difficult material to work. What are you using for a billet? Wood? Gary

Nice, I gotta say they look spot on to the points I find in Maryland iv found some nice archaic pieces
OP

ToddsPoint said:
Nice workmanship on extremely difficult material to work. What are you using for a billet? Wood? Gary
Click to expand...

Right, the quartzite is wood (dogwood, hickory, persimmon) direct percussion to finished thickness then antler punch and maybe a tiny bit of pressure for the base and edgework. Copper or antler works on it to an extent, but it's hell on the tools!

For pure quartz I like to hit it with a small diameter, hard piece of whitetail antler. The saving grace of quartz is that it pressure flakes fairly easily.
You must log in or register to reply here.