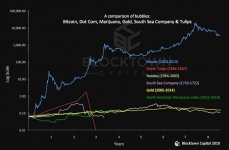 What lies ahead? https://www.theblockcrypto.com/post/53958/taproot-schnorr-bitcoin-bip-development
The Bitcoin Halving (early May 2020) https://www.bitcoinblockhalf.com/

I bought some a few weeks ago at about 7400 along with a few litecoin. Seems likely it will continue to go up , the stock market seems really bubbly, very high p/e ratios thru out, that we havent seen since the dotcoms.. But nobody cares. The central banks can't control crypto yet, but they are certainly controlling the main equities/stock market with their buying. They have been buying for several years and still are at a rate of 30 billion per month until april (maybe more allocated because of Coronavirus), but I bet it won't end there. The stock market is crazy bullish. It is not truley a "free market" anymore. They put out a fear that you might miss out gains if you sell and that is pure craziness. Where does it end? I suppose you can't guess it or fight it. 401k it if you can and retire on a high.

A crypto ETF was in the works for 2020, but I think it's off for now, that would also stimulate bitcoin pricing. Another thing to consider is major Chinese crypto mining plants are pretty much shut down because of the corona virus, so that also increases price for now, and could extend depending upon what happens with the virus containment.

losers will off to jail, Bitcoin are not real.

Hard to say. I don't fully understand it yet. Btc is nothing you can put money in and have something tangible except a number on a computer. But , so it seems everything is that way in investments. A piece of paper or some numbers on a brokerage account for stocks. You can sell them and have numbers put back in your bank account and withdraw them with pieces of paper that represents value. The financial world is messed up or at least hard to fathom. I just want to make money as we all do. Seems the dumber the money is , the more it increases in value anymore.

Btc had an article fed is going to crack down on crypto, so it tanks.... Apple warns on earnings because of coronavirus, it rockets back up. Whacky. Coronvirus is going to mess with markets for months to come. Probably not always in a good way for most. Hard to say how much money is being used to float the market, Fed dollars , low interest rates for loans making liquidity, 401k monthly installments, foreign investments in our markets, computer algorithms running market. A day-traders dream I think. Fridays on option expirations can make a killing in like 10 mins with a 50 cent change in stock price on aapl, msft and a few others. Getting me thinking... Already did some on nvda but small bets, like 1500 at time , seeing it double and triple on puts and calls same day, but luck can run out quik. Crap had one triple in 10 mins was going in and out , but by the time i hit the button, I only doubled up. can lose it all just as fast. Vegas is fun, but I never gamble there. Stock market is a racket and way more accessible and sometimes even predictable.

And so what happens in an overly optimistic and inflated market when a pandemic lingers that has possible global economic repercussions, is it sinks for a few days until "the weak hands sell out", then amazingly it rebounds and shoots to new highs and scorns all the sellers, until the sellers decide they don't want to miss out on the possible gains they are missing, and when the last bear has bought back in and pumped the market even more, and are ready for the long term gains, the plug gets pulled and it falls off a cliff. Same as in the dot com era. The market always protects the wealth of a few. 401ks are for the "poor" to inflate the portfolios of the rich. Just my opinion. Personally Id sell half of where it is, and let the other half ride. Massive gains in the last 5 years. The market always comes back. The fear in this market is missing out on gains. And that's nuts. You want to retire at a high. There will always be one, but nobody knows where it is. Current parabolic charts plus ridiculous optimism may have indicated one.

What's it mean for bitcoin? Many btc investors may want to go to cash to pile back into regular stock market if it tanks. But bitcoin is it's own entity. The stock market will likely recover fast, too much money out there wanting US stocks seeing the last 10 year track record. They don't care what price they pay. The modern day multi-millionaire, has more way more debt than equity. Many companies have multi-billion dollar market caps and make nothing, they lose 100's of millions per quarter and the ceo's live in mansions. Thank God for the investors giving the ceo's Lamborghini's , 500-1000 dollar bottles of wine, champagne, scotch, Italian furniture filled offices, vacation houses, 100k parties, 25k watches, etc etc. We are below them on the food chain. Good luck to all. I'm rooting for the little guy with a 401k to retire on.

Lol, if you trade stock options at all, so much volatility in last couple days you could buy puts or calls on one day, and the next if the market ended 3 % up, the calls would double (100%), and the puts would still go up 20% ! Wth? Crazy. Market is messed up bad.
J

Bitcoin mostly follows the stock market so you can see where its going.

No safe place in a crash apparently. I figured people may want liquidity and put in back in a down stock market from bitcoin, but who knows whats happening. Seems like an assault on world financial system.
J

In this environment the last thing I would want is digits on a screen. When they start lopping off zeros it wont be a good place to be.

Sold btc for loss at about 5900, buy back in about a month to write off loss, maybe at like 2K per coin? Bad days ahead for everything , even with fed buying stocks. Fed becomes bagholder here. Might need my my btc proceeds to pay bills. About 125k virus cases today, probably 175k by monday night, 10 days behind on numbers, best guess looking at 500k possible cases already , but 4/5 not accounted for, doubling by wednesday to 1 mill in us, but test kits arent out to smaller cities, so numbers won't catch up till 7th or 8th of april. By then they probably stop counts at 300k and just say "widespread" to prevent panic. Problem is all the smaller cities aren't really doing anything, soft shut down.

The reason Wuhan contained it (for now) is they shut completely down, made wearing masks mandatory in public, Quarantined, disinfected EVERYTHING , including stores, shops, restaurants , STREETS, AND CURRENCY. What did we do? Quarantined a couple blow up high population cities, waited for governors to shut down their own states school and non essential workplaces. Restaurants are still take out, people in smaller cities are going about as usual, perhaps wiping down their shopping carts. This will blow up badly. I'm bearish on all markets. Any up trend over next few weeks is fake fed pump, it won't last. BTW I'm a little sick, been taking zinc lozenges for throat, have stuffy nose, starting to cough. Don't know what I got. There's no tests in smaller towns. This is messed up. No playing catch up in pandemic. It's how far behind you are.

Quinoa, this is all about getting rid of paper currency and upgrading the financial system to a digital dollar and digital wallet. This virus is the channel by which it will be accomplished. As I stated in my previous posts, a bill was introduced recently in the senate called the "banking for all act." https://www.forbes.com/sites/jasonb...ation-surfaces-in-the-us-senate/#2d9b4da33866

There's tons of speculation on how all this will come to pass and many newcomers starting to put their money into cryptocurrency like bitcoin, ethereum, XRP, etc, as a means of trying to preserve their wealth, and even make money. Crypto investing is very high risk but some die hard crypto investors, believe that these digital tokens will be worth a lot of money in the near future if the world does go digital; and that some of these cryptos may end up becoming a one world currency for all. There's already a United States digital "stable coin" on the exchange, that is worth $1 U.S Dollar. The USD COIN or (USDC).
Last edited: Mar 29, 2020

Feds buying etf's directly, unlimited money, not sure what this means. It seems for the meantime, investments are no risk and they will go up no matter what. I have some puts, but mostly doing calls (long) atm.

kinda playing both sides, but more on the long side of things. Looking at khc some near term calls there, bac some leaps 2 years out, buying airline stocks but leveraging a couple puts as I buy, what a whacky market. Look at tsla, out of this world, no connection on earnings just a trendy stock to own. I don't know what's going to happen, tank in june, july? All time highs coming soon? When does it end?

Have to follow big money, but hard to see it. Millions being made and millions being lost. One thing to watch for is the baby boom coming next year because of the lockdown. I haven't bought into yet, but baby stocks, diapers, food, clothes, could be big next year, easy double on options, but I'm looking at 3-10x in this whacked out market, just waiting for a general market drop, second coming of virus maybe. They keep underestimating it. Things will shell out maybe in July or August.. Plenty of time for a double, but can be patient and make bank maybe. Long term like 10 years I don't see greatness. Ride the short term wave I guess and get out. When Fed stops buying junk bonds and etfs watch out.
J

Yep it's in its death throes now and only a matter of time before the dollar collapses completely.

Theres always plenty of cash to be made on both sides and it's easy to see what they are doing.

They can print whatever they want. It wont fill the black hole theyve created but there will be some gains to be made for sure!

"Sophisticated swabs".. lol, maybe that's the ticket. Who make"s them, hahahahah. This world is unbelievable.

Yeah, I missed out on that btc run. Shouldn't have sold, but needed to sell for buffer in an account. Wanted to write off btc losses , so 30 days for back in, but bought xrp instead. Will see what happens. Up like 20%. Small position, like 6 k coin. Paid off rental property with btc loss sale. Can't be all bad. No big gain, but paid off debt. Regular market is fake fed pump. Don't matter what you are into. Just be careful. Still going up for a while I suppose.
R

MAY be making a "come-back", dunno...
You must log in or register to reply here.