🔎 UNIDENTIFIED What is this lead object

??what do you all think

Sort by date Sort by votes
B

My guess is a vintage ricochet lead bullet.
Upvote 4

maybe it was flattened on a railroad track
Upvote 4

Like stated above it's a bullet . being you found it in the bay I'd say it was flattened to use as a fishing weight but not completed. I've found a few over the years , here's some from the net. 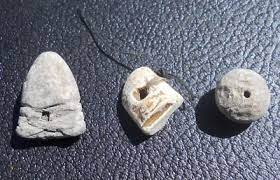 I deleted my comments.This OP has neither acknowledged or liked or thanked anyone for replying even though he,s visited the post several times.
Upvote 4

traveller777 said:
It is a three ring bullet, likely Civil War era. Likely around .58 caliber. Bullet for sure and smashed by blunt force. Maybe ricochet but never seen one flatten like that from ricochet, but I guess maybe possible with right ricochet. I would put my money on flattened some other way. But still, a Civil War era bullet. A mini ball.
Click to expand...

crashbandicoot said:
I deleted my comments.This OP has neither acknowledged or liked or thanked anyone for replying even though he,s visited the post several times.
Click to expand...

Read the "Please read before posting items in the what is it" Forum. Last line,red print.
Upvote 3
OP
M

mjb Mike said:
I thank everyone for there help I sometimes only have time to read what was said and no time to respond also like to get a few responses before i reply
Click to expand...

Only takes a half second to mash the like button.
Upvote 3

It was used in the Stone Age by a "Rock Musician".
Upvote 2
C

traveller777 said:
It was used in the Stone Age by a "Rock Musician".
Click to expand...