🥇 BANNER A funny and Fantastic start to Fall!

Still a couple of more weeks before Ironhorse is ready to dig, but I got out for 4 hours today, and did not at all expect results like this!


So this is my kick-off for Fall, and my last year digging has been very good, so I decided to give myself a bit of a goal this year... like a challenge. The challenge was to find something good enough to have published in Western & Eastern Treasures magazine, something I have never done, but obviously being a member of the T-net have seen several others do it. And going hand-in-hand with that, I would have to assume my find, whatever it would be, would likely make the banner here.... I mean if it's good enough for the magazine right? lol So thinking a little more, and this is totally true, I was going to make that my theme for the Fall and title my posts something like... The road to Western and Eastern hunt 1... or the road to making the Banner hunt 1. So I was really going to do that, but what happened today was pretty funny given my 'big' plans, so I decided to scarp that idea and just explain why it's funny.

So I get to my fields today, walk across one IH and I had hunted, but it was the two on the other side I wanted to dig. Turns out both were still planted so had to stay in the one I was, which wasn't so bad as it's huge and there was a site with plenty of targets in the middle, and I dug a beautiful 76th button in Dec. 2015 at the bottom. So I'm making my way down and getting close to where I had dug the 76th and get a target, dig the hole and have it out, but realize I dropped my pinpointer. So I leave the hole open and my shovel there, and start looking for my PP... and lucky for me my Deus can send out a signal and make the PP sound off... and turns out it was just a few feet away. So it took me about 2 minutes to sort that out and have it back, but that was long enough for the thought to go through my mind... wouldn't it be awesome if the target I found was another of those 76 buttons. So I get back to the hole, locate the target, and in disbelief it was another freakin beautiful Rev War 76th officer button.

When I found the one in 2015 http://www.treasurenet.com/forums/t...in-up-again-old-copper-trail.html#post4770302 it gave me a super high, but this one was more like .... you got to be kidding me! Of course at that point I know I have to hunt this place hard and not 5 minutes later I see another silvered military in the dirt and think good lord I have the coat size now too! ...but did not turn out to be the case, but was another very nice button... Perth Highland Fencibles (1797-1803) I hunted about another hour just getting a few plain buttons, but did dig my third early military for the day... an Argyllshire Volunteers button (1803-1808) I sure never seen anything like this coming from that bottom corner of the field, but am very glad where I thought I wanted to be was still planted!

Now here's what cracks me up. I have my whole magazine /make the banner plan, and what do I go out and do... dig pretty much the exact same thing that got me my last Banner.

Not that I'm complaining, but that just ain't right.

Phenomenal start of the fall season! Congratulations and banner!

Holy crap...that is unreal! Making me itch for another hunt!!

The button king is at it again

Holy wow! That 76th is pristine, and in better condition than the last. You get my banner nod for sure!

What a beautiful button-
And I agree it’s a banner find.
Congrats

Funny post, but great as well !!!!!what are the odds

I remember that 76 you found a few years ago, amazing to see another one come up. It's beautiful man, and just as bannerworthy as the first one! If this is only the very start of your season--god help us lol!

Just plain amazing! Beautiful buttons, and the 76 gets my banner vote as well! Now stay inside for the rest of the season and leave something for the rest us, please...

jeff of pa said:
I like the Perth Highland Fencibles

That alone would have made my day.
A

Wow ! Gives some credence to the old saying " be careful what you ask for - you just might get it " 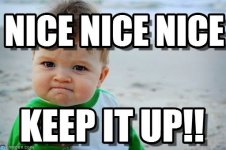 Those Revolutionary War buttons are awesome! I would love to dig some 1776!
You must log in or register to reply here.