A recent search of the woods has me reconsidering my preference for searching open fields. I had been scouting for a potential cellar hole but only located the ruins of a barn. Over an hour of searching produced two plain buttons and a more satisfying recovery, an ornate horse bridle rosette of pewter and brass (possibly dating early to mid-1800s). Here’s the rosette. 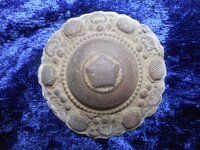 I widened my search area to hopefully locate the house foundation but only came upon another barn site with old trash scattered about the brush. Retreating back to the first barn, I came upon a loud, high-toned signal near the opening of a stone wall. I figured that the target was a shotgun shell, rusted can, or other form of modern trash – I couldn’t have been more wrong. After removing a large cut plug, and loosened up some dirt, I fished around with my probe and uncovered a small, intact tobacco pipe that appeared to date from long ago. Digging into cellar holes and trash pits over the years, I've found a few nearly intact pipes – but never complete and certainly never so old. 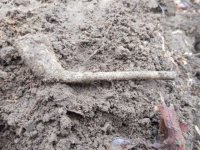 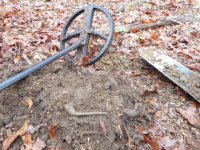 Such a surprising find triggers a number of thoughts in an instant: “How could it be complete? What are the odds of digging a pipe by chance? Pipes are clay – so what else was in the hole?”

I picked up the pipe and was astonished by its heavy weight and solid feel! It was a metal pipe of lead or pewter! I was just ending my morning hunt, so I took some pictures and a short video. I searched for other associated finds in the immediate area and headed home eager to research my unique find.

I figured the pipe was Native American in origin, and a search online confirmed this beyond all doubt. The pipe was found along an old Indian trail in Rhode Island. The colony was founded by Roger Williams, the wayward minister who fled from the authorities in the Massachusetts Bay Colony in 1636 to avoid being shipped back to England. He spent the winter with a neighboring tribe, eventually settled, and traded with the powerful Narragansetts to the south of his settlement in Providence. His knowledge of the local tribes and their language resulted in his authoring a book published way back in 1643 - A Key into the Language of America. It was the very first study of a Native American language written in English; it’s this book that also confirmed that my recovered pipe was Native American in origin! In his book written in old English, Williams describes the metal working abilities of his native neighbors with the following: “They have an excellent art to cast our pewter and brasse into very neate and artificiall pipes.” I had found a specimen of one of these exact pipes! 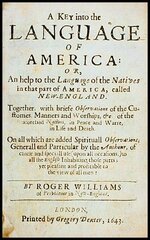 I’ve dug my share of pewter over the years, all of it reduced to bits and pieces, usually a spoon handle or a button, but somehow this pipe emerged from the soil nor worse for the course of 340+ years buried in the ground. 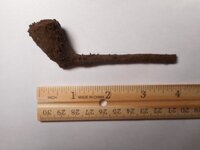 I took the precaution of having the pipe checked out by a professional conservator who was very helpful and offered sound advice. I allowed the pipe to slowly dry as the conservator instructed, and it remains completely stable and solid. I still need to lightly brush off some of the surface dirt, but I’m going to leave the dirt in the bowl untouched. I’m making arrangements to have the artifact properly stored with inert material to minimize the chance of any future deterioration. Here's the pipe after thoroughly drying. 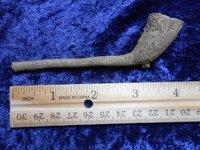 The pipe dates as early as the 1630s and no later than 1676. The pipe most likely belonged to a Narragansett brave. So how rare are Native American pewter pipes? They are very rare. “Neat and Artificial”: Base Metal Trade Pipes of the Northeastern Indians is the title of a 2004 study of pewter pipes that I found online. This study could only account for a total of 43 pewter pipes in the holding of several museums. They are as follows. 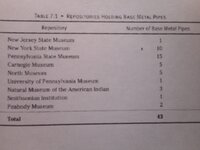 The study estimated that no more than 150 pewter pipes exist overall between museums and private collections. Nearly all of the 43 pipes from the study were recovered in the excavation of burial sites, as the pipes were deposited as grave goods. How it was that I came upon an apparent dropped pipe certainly seems highly implausible, but is it really so? This is one of my very best historical finds dating between the arrival of the English in New England and the inevitable conflict between the English and most of the Algonquin tribes of New England It was called King Phillip’s War, after the sachem of the Wampanoags, and the conflict all but consumed New England from 1675-1676. Interestingly, major fighting took place in the area where I recovered the pipe; moreover, colonial forces captured a large number of Narragansetts at nearby campsites. They were eventually sold into slavery in the West Indies. Perhaps these events are connected to the loss of pipe? It’s possible, but what’s certain is the overall identity of the pipe – dating to the mid-1600’s, fashioned from English pewter, Native American in origin, and fashioned by hand, as described by Rhode Island’s founder, Roger Williams.

I only recovered a single musket ball on a return trip to the site, but I’ll be going back sooner or later. My apologies for the long post, but the significance of some finds, if not many finds, is all in the details.

The find is beyond incredible but the research, write-up and history lesson you've given me goes above and beyond. I am going to throw my banner vote in. Congratulations on such an amazing, rare and historical find.

So awesome! Banner for sure.

Top notch stellar find... above and beyond.

I always prefer woods to fields given the choice.

Congrats on a great find and thanks for an equally great post and information, I also vote banner on this find

Wow that is truly an amazing find and a stellar research job.

Nice find! And very thorough and informative writeup! It's nice when people have the initiative to include research with their finds.

Great job on the find and research!!! d2

You're right on the old stuff as usual. Can't say I've ever seen a pewter pipe on Tnet - very rare indeed!

I also like that the pipe is of European styling and English pewter, and crafted by the natives. Wow.

I'd like to see this up top, so I'm going to go ahead and vote Banner.

very well written and documented post with an awesome find, should be a banner

This is why I like Tnet. To the top!

Awesome find and what a great post! That pipe held up very nicely in the soil too.

Thanks to all for the compliments. Support for making the banner is much appreciated.

Great find, very interesting, not heard of these.

''recovered in the excavation of burial sites, as the pipes were deposited as grave goods. How it was that I came upon an apparent dropped pipe certainly seems highly implausible, but is it really so?''

It's actually very plausible. You see this with many Archaeological finds, they often come from Grave situations where the Archies are more carefully digging. Time & time again Detectorist have proved what Archies have assumed to be rare grave goods are actually lost all over the place, including in hunting or settlement situations. If you had a central recording system for finds like we do, you would have more data & the Archies could make better assumptions.
Don't take this the wrong way, I'm not saying its not a rare find, only that the Archies assumption that they mostly turn up in graves is inaccurate.
Last edited: May 3, 2017

Awesome post. Congrats on such a personal and historical piece!
M

My 12 year old son read this (over my shoulder) and said "man...see if that guy can finish my history research paper due on Friday".

Amazing find the history behind it is simply fascinating good job on finding and preserving an awesome piece of history!!

Banner vote here.
You must log in or register to reply here.