Another William IV and an early US Navy button...

My favorite field was harvested today! Last spring some of my best finds at the locations were a hard times token, a couple largies, and a navy button like today's (but not in as good condition), as well as a number of buttons and musketballs. Today was my first field hunt of the season and it didn't disappoint! I spent about two hours there and here's what I found: 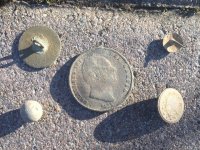 I know it's not a lot, but I'm satisfied. 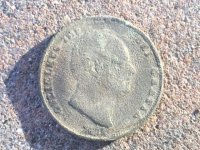 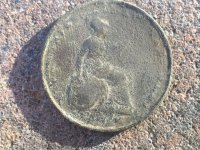 I initially thought it was a KGIII because of the right facing bust but I quickly realized my mistake. The date on it is 1831. 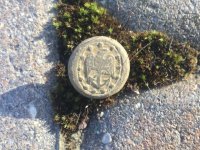 Here's the Navy button, I found an identical one last semester and the consensus here on TNet was that it was late 1820s. The backmark is pretty sharp and says RICH COLOR, I just realized my photo of it was fuzzy but I don't have enough light to take another one. I'll try and get another tomorrow. 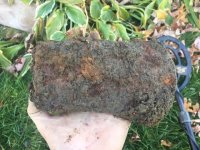 I cut my finger in two places on an aluminum can and had to go back to the car to stop the bleeding, I decided to check out a few other sites after that. The first one no one answered the door but I got the go ahead at the second... unfortunately I must have made a mistake in my mapping because there wasn't even a nail to find. I think the LO felt sorry for me and said I could detect around the house (which dated from the 1870s I think), I stayed there for about an hour and a half but all I found was a pump organ reed and an axe head. Alright I guess but not as good as the first site! I gave the axe back to the owner as her family had been on the property since a little after 1810!

Good luck and HH! I'm sure you guys will be seeing more of my posts in the future as many of my permissions have just been harvested! I know it's only a matter of time before I get a Spanish or other old silver!
Upvote 17

Thats a great spot from the finds you have mentioned I love that coin looks ancient . Awesome job

Great button!... you are so fortunate to find another one, plus nice other finds too!
OP

Thanks guys! I'm always happy to find an old copper or military button and I'll hopefully be doing some more digging this week... got a few more sites to check in on. HH.
Last edited: Oct 19, 2020
You must log in or register to reply here.