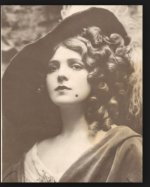 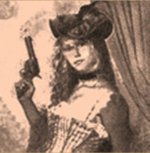 Born and raised on a wealthy southern plantation, Belle Siddons was the definition of a Southern beauty. During the Civil War, she employed her good looks and became a confederate spy at twenty-five. She was caught and imprisoned, but pardoned after four months. She later married a gambling man who taught her to play cards. Finding that she was naturally good at the game, Belle became famous as a dealer of the game 21. When her husband died, Siddons followed the gold rush and set up shop in South Dakota. As owner of her own dance hall, bar, and gambling establishment, Siddons changed her name to Madame Vestal. It was in her establishment that she met and fell in love with stage coach robber, Archie McLaughlin. Once again, Siddons used her skills and beauty to become a spy and retract information from stagecoach drivers which she then passed on to her lover. Unfortunately, Siddons’ confidence got the best of her and one night she let slip that there was going to be a robbery. McLaughlin was caught, tried and hung, and Siddons became a wandering drunk who would eventually die alone in jail. 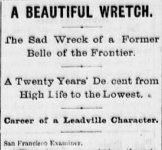 Great story Jeff. Thanks for posting.
You must log in or register to reply here.

"Thar's Gold in Them Thar Hills !"