Couple Bucket Lister I Never Thought I Would Find In the Northeast!

Weather was fantastic this past weekend, obviously a far cry from today.

It was my last opportunity to do a couple of spots that I'd promised people I would take a look at. There was virtually no chance of 18th century finds so they were lower priority, but I still check out any spots that I get permission for just in case.

The first was a late 19th to early 20th century cheese factory which isn't something you come across every day. Just a large sloped, yard now with no trace of the foundation left. I was positive it would be an extraordinarily trashy site and I was correct. Almost every step had a screaming signal and they were invariably large pieces of iron or lead. I found a disturbing number of lead pipes for a food production facility, and some larger brass fittings that I had to go down a foot or more for. Finding smaller coins would have been impossible with the interference, but I was hoping that I would luck onto a half dollar.

After about 50 pounds of trash I got yet another screaming 90s tone and dug a wide and deep plug. At first it looked like another piece of trash brass, certainly not a coin, but then the light hit it just right: 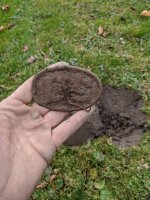 Never in a million years thought I would find one in my area, let alone in this particular yard! Did some careful work cleaning it, but as it turns out the soil was relatively kind to it and the lead back was pretty much fine. All the damage seems to be contemporary. 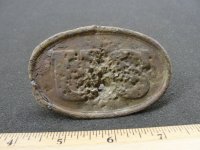 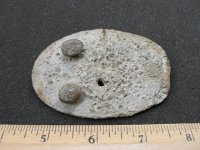 It almost looks like it was hit point-blank with buckshot. There's no trace of the hook on the back, but it has "puppy-paw" studs so it could even be pre-war I suppose. Pretty crazy find and I really wish I knew how it ended up where I found it.

The next yard was from an 1840's house used by tenement farmers. Once again lots of modern trash with a number of older finds mixed in. The ground wasn't quite as saturated with iron so I did pick up some older coins: 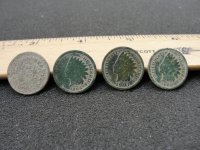 Not far from the coins I dug up another bucket-lister that I wasn't at all expecting: 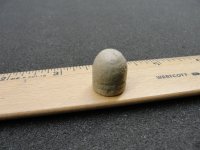 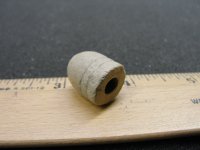 Dropped Williams cleaner bullet! I knew it was Civil War era out of the ground, but it took me a little while to identify since I've never seen a cleaner bullet without the plug on the bottom. I know these are fairly common on battlefields, but around here even a Minnie ball is a rare dig and I didn't think I was going to cross this particular variety off the list unless I took a trip down South!

Some other cool relics turned up between trash digs. 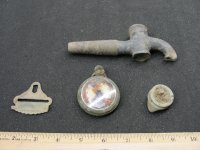 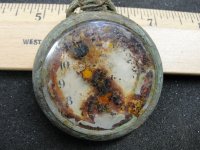 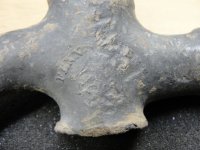 A nice dollar pocket watch which is always fun to dig, but particularly nice in this case since the paper face was preserved beneath the glass. The pewter barrel spigot is the first intact pewter example I've found and has some of the manufacturer's name visible on the side. Seems to say "Fenns & ---- No 8." Not much on the manufacturer themselves, but they seemed to be in business towards the beginning of the 19th century. I found a reference to Fenns Faucets in an archeological summary of an ~1810 sunken ship. Amongst the other artifacts was a barrel full of these exact spigots which I thought was very cool! 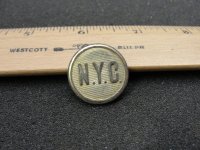 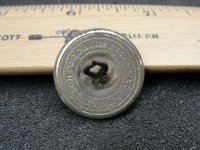 The button is another fantastic first, a New York Central Railroad uniform button! The Waterbury Button Co backmark suggests this was used between the 1860s and 1890s and almost all of the gilt was preserved. Really nice piece and a great way to top off the hunt!

Now there's almost 2 feet of snow on the ground so I seriously doubt I'll be detecting again before the year is over. Still, some solid Civil War finds hundreds of miles from the nearest battlefield is a pretty good way to cap any year!

Congrats on the Belt Plate, I have seen quite a few found that were lost by veterans, including a sword belt plate I have in my collection found where a mid 19th to mid 20th century house stood. I have to admit I am a little skeptical that you had a Williams Cleaner bullet on your bucket list BEFORE you found that

I think the keg spigot is a little odd for an early 19th century type because it doesn't have the flat protrusion on the spout that they used to "tap" it into the keg. I looked up Fenn Faucets and see in the History of Plymouth, CT where they were patented in 1810 and the business carried on by the Fenn family until 1859 when the business was sold.
All in all a nice group of recoveries

I had ANY Civil War era bullet on my bucket list!

paleomaxx said:
I had ANY Civil War era bullet on my bucket list!

I can buy that

Congrats on the plate. Other than a few buttons and three ringers, I too have had very limited success finding Civil War era items in my area. Finding them is probably like finding colonial coinage on Tennessee Civil War site
I

Thats a good bunch of finds thanks for the pictures

Congrats. Yes, such a find are unexpected in the northeast. Thanks for offering some hope.

Congrats!
old hunting partner of mine found a CW US cartridge plate on a small town common down over a foot - he was shocked too

if this is your year end hunt, you a great one for sure.
Nice going on getting the plate-another fine example of digging something somewhere that it usually isn't suppose to be there, that's what makes these hunts so special. (for me at least)
Cool spigot with having the manufacturer's name, first time I've seen a pewter one as well.
Great looking button BTW-nice keeper.

WOW! Your recoveries are stellar!
I concur with you about your buckle's demise. . . the larger hole in the center going thru the entire buckle might have been a nail hole from someone nailing it to a tree.

Congrats on the US plate....it's great when the unexpected pops out.--JB

You did it again... Stellar dig.

Crazy finds and just before the snowstorm

Very nice! In my two years of hunting the only CW relic I've found is one single minié ball. What variety is the 1864 IH? Other than being worn it's in decent condition.

Great finds- that buckle is so cool- Congrats!

Enjoyed reading your post. Some really nice finds there. WTG

Great bunch of relics, thanks for sharing!
You must log in or register to reply here.

Gold specimens found and what the crush looks like

Finally some silver showed up, even a little bit of gold, sort of!