long time, no see!
The last time I was here, I was transmiting from AFG!

Found this last night, and I can't find much info on it. I would call it a die lash issue (think: valve lash or "clicky" lifters in an engine, from running the machine too fast) although it's probably called something else in numismatics.
Anyone know rarity and value? I don't want to get bamboozled by my local coin dealer.

Thank you for looking! 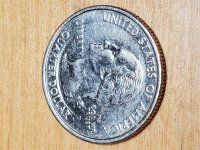 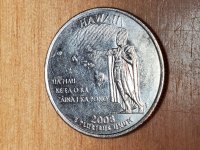 yeah, looks like it's been hit by something after the minting process.

Local coin shop said it is a heavy die clash "Tsunami Wave" uncommon but not rare, worth about 2-3 FRNs.

I don't see anything on the opposite die that would make those marks.
P

airborne1092 said:
Local coin shop said it is a heavy die clash "Tsunami Wave" uncommon but not rare, worth about 2-3 FRNs.

The Beautiful Berkshires in Western Mass.

First of all, welcome home from AFG and thank you very much for your service. The reverse has a struck through cloth look but the semi circle line with reeding above "quarter dollar" appears to be damage so not exactly sure what may have happened here.

You're very welcome, I haven't found an American yet, not worth fighting for.

I looked into the "Tsunami" errors, and found that it's a result from GW's hair pressing through the other side. This is obviously not the case. My initial thought was similar to Cudamark's position that the damage was done after minting, my evidence is based on the significant scratch on the reverse. However, what piqued my interest initially was, the amount of force to create the impression on the obverse and the detail of another coin's reeding would have to result from significant pressure, based on my own anecdotal experiences. The scratches on the reverse seem reasonable like it was pressed and pulled.

My disconnect is thus: how would a coin, like a dime, be pressed into the quarter dollar? there are no apparent scratches on the obverse related to the impression, so I go to possible scenarios like the coin was indeed a die clash, or the coin was stuck still in the process and was subsequently scratched as it fell away, or as it moved into the next stage of the process.

Perhaps the planchet was already damaged prior to minting, and the scratches are from the protrusion from the obverse as it passed through the process?

I don't know, the Tsunami die clash error explanation is tenuous at best.

thank you all for your insight and ideas, this is learning process for me, to be sure!
You must log in or register to reply here.