Help with button and what is this thing? A cufflink, button or pin?

These finds are from my towns meeting house. I finally got permission from the head of the board of caretakers that run it. Of course that didn?t stop almost every car going by to stop and ask me what I was doing. There is such a stigma about metal detecting. People just don?t get it, even after I explain how it?s about the history. And anything I do find I?m giving to the town board if they want it. Here?s a little interesting info from the meeting houses website.

This historic meetinghouse stands today in its original 1772 form, appearing virtually as it did then.
The original hand-shaved shingles are still on the walls and when, in 1872, extensive repairs of the structure were undertaken, they were found to be so far superior to modern shingles, it was decided not to disturb them. Nails and hinges throughout the building were all handmade. The windows were easily the most expensive parts of the building, since they were imported from England; each window is said to have cost the price of one cow.
Especially interesting is the paneled balcony, which was prepared for the servants, who also attended worship upstairs. These fine old panels are boards 30 inches in width, surprising because the King?s men had marked all trees over 21″ in diameter to be saved for masts for the Royal Navy.

Pretty cool about the shingle repair. Just don?t make them like they use to. 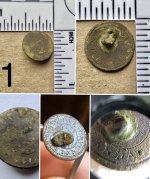 So I found this button a couple feet from the main doorway. I didn?t notice the 3 on the front until i had already started dry brushing it. Which took away most anything that was on the front. Thankfully I took a picture of it straight out of the ground. Something I will always do from now on. In the before cleaning picture it actually looks like there is more before the big 3. Maybe two smaller 2s. On the back I can clearly make out STANDARD. There is another word which I?m guessing is probably IMPERIAL. Just because I have seen those words together on a few other suspender buckles from different sites.
How old? And is it civilian or military? 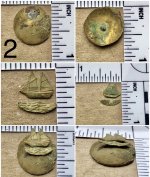 This things were in the same hole but not together. About a 6 inches from each other. But it just looks like there was something attached to the circular piece. And with the size of the little ship I just figured it was attached to the circle. But the little ?waves? aren?t bent to the shape of the circle thing so I don?t know. I?m assuming all 3 pieces were part of the same thing.
What is it? A cufflink or pin? Anybody ever see a similar one?

Thanks
You must log in or register to reply here.

Need Help with ID of an Asian bar