help with makers mark or ??

Howdy folks. Need assist with makers mark or the meaning of these symbols. looking for purity but can find no other mark on piece. This is from a silver set inherited by my wife from her mother.
Appreciate ya. 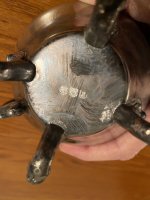 If you could show us a complete picture of the piece and the other pieces in the set, that might help.

The country of origin is what I'm trying to ascertain, these marks don't look familiar to me.

This piece looks more likely to be silver-plate,
Dave
Upvote 0

The 925-1000.com site lists the mark (with a fleur-de-lys as the centre icon) as “unknown, probably USA” and there has been much discussion on forum sites about whose mark this might be.

Some have commented that when the centre icon is an ornate ‘M’, it has some resemblance to that used by Meneses of Madrid (Spain), but that’s a bit of a stretch. The resemblance isn't strong and doesn't explain why the ornate M is sometimes substituted by the fleur-de-lys.

So far the unknown triplet (with either an M or a fleur-de-lys) has been seen on tea services which include a coffee pot (some claim it to be a teapot, but I think not) with a candle-warmer base, glass carafes with silver handles accompanied by a similar warmer, platters, and epergnes (ornamental centre-pieces for flowers or fruit. I’m guessing that what you have is similar to this warmer, which had the centre icon as an ornate M: 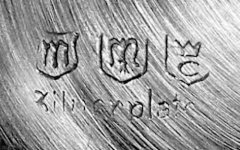 As far as I know, no-one has reported these marks on anything other than silver plate, both on a copper base and a white-metal base.

There is only one other clue. Some of the pieces are reported to have a blue and silver adhesive foil sticker on the base that says “Eton” or “Eton Silverplate”. Multiple variations on this: 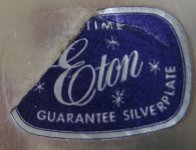 The sticker is that of the Eton Silver Company of Glendale, NY although the actual silver marks on the pieces themselves are not registered to them. Eton were active from the 1960s to at least the 1970s and sold a great deal of imported fancy silver plate in 'antique' styles, so these pieces were likely made for them but it’s uncertain whether the original manufacturer was American or foreign. The condition of the stickers seen and the believed date when the pieces were originally purchased (where the owner is able to say) are consistent with that dating.
Last edited: Apr 28, 2020
Upvote 0
OP

It seems obvious some time was certainly invested by some good folks out there and we thank you for your interesting comments. could be a number of countries of origin from Mexico, Venezuela, USA, Lebanon, Japan. Anyway pics will be forthcoming when I can assemble all the pieces.
thanks again,
bravowhiskey
Upvote 0
OP 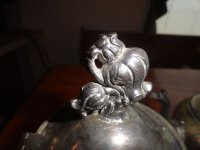 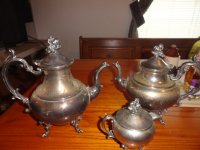 Thanks for the extra pics. That finial and the style of the handles are definitely as sold by Eton in the 1960s and 1970s. There's a set at the link below in a slightly different style which has the blue and silver Eton sticker still on the bottom of one of the pieces.

It doesn't solve the mystery of who was the original maker but that's definitely an Eton (of Glendale NY) set in silver plate and no older than vintage.
Upvote 0
You must log in or register to reply here.

Old spoon that I need help dating and IDing