Ideas on a digger pouch.

Like previous post from ecmjamsit I use a two-pocket leather carpenters nail apron I think it was $15. I like having my pinpointer and my digger on opposite sides so it works well for me. The smaller pocket holds a little plastic container that I put cotton balls in for fragile finds. 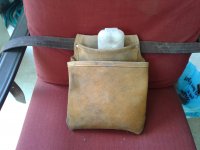 I use the coin elite pouch. It is really well made and holds my digging tool and pinpointer. Great pouch for coin shooting. Mine has the mesh bottom.

For relic hunting I recommend the relic elite pouch. All are really well made.

Me and packs are like a woman and pocketbooks. LOL. I love Mystery Ranch products and have a new waist (monkey) pack with an extra add on pouch for finds. I also play with leather (not good at it) I'm making a pin pointer/18" shovel sheath. Haven't even got the shovel yet but it's coming. I'll post a picture when I'm done.
Up

I picked this pouch on amazon for $9.99. They come in several colors. 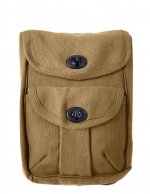 Lol, only when I'm detecting am I this kind of guy. Denim ladies purse from Wally World. Four zippered pouches, smallest for coins/finds, next largest for my root snipers, and two largest for trash items and my hand digger when I'm not actually hand carrying it.

Special note: I mainly hunt rural areas where I'm not seen that much. You probably wouldn't want to use this in town unless you have thick skin and/or packing heat.[emoji13][emoji1] 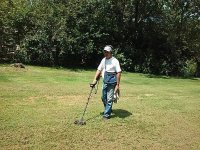 As far as comfort, the belt is the most important part. I use an Army web belt for heavier gear for longer woods outings to include a water bottle and a wide leather belt for a Lesche, pin pointer and light weight coin hunting pouch setup.

I ended up with a garret pouch and it has served me well for years even though the atpro is just gathering dust. I put lesche and pinpointer inside poucch and wear it like a rock bag, not on my hips.

I use a Klein!

Found a Freeloader finds bag at colonial in Camo. Expensive and doesn’t look like a man purse.

RustyGold said:
Found a Freeloader finds bag at colonial in Camo. Expensive and doesn’t look like a man purse.

Ouch I felt that jab.:laughing:

I use a load-bearing suspender system, that has several pockets or pouches/bags, that I can slide to reposition them, dump bag for junk and a tactical bag for dodads like more water and food. See my profile pic. I carry a lot, but am far away from truck...!

ecmo said:
Ouch I felt that jab.:laughing:
Click to expand...

Lol! Wasn’t aimed at you. Yours looks like a computer bag. I was more referring to the ones with accent trim.
T

Trying to get hold of freeloader but he doesn't seem to be very responsive so looking at alternatives. Anyone tried one of these? What are they like?

I use a tactical side pouch. The kind that soldiers wear. It has loops and straps for attaching gear, large interior pockets for finds and trash, and it looks cool- not to mention, the durability factor.
R

While I REALLY like the multiple pockets on my Duluth Trading Company Firehose Duluthflex Cargo pants, I gotta say that I really also DONT like the residual dirt in my pockets. While I still do wear the pants, I have started using a drop leg military canvas drop leg pouch. It has a couple of pockets, so there's no more dirt in my pants pockets(easier on my Ruger LCP). My DIGGER drops right into the large finds pocket, and a little creativity with the stitching and a razor has resulted in a Fab pointer holster. The rig attaches to my belt and then the lower portion of the bag buckles around my thigh. I have carried near 20 dollars in coins recently on one outing and discovered that the weep holes sewn into the bottom of the bag do funnel dirt and moisture out. It cost me a whopping 12 bucks in like new condition at Maine Military in Brewer Maine.
J

Freeloader made a very nice bag, and I was hoping to buy one from him in 2019. I know what it takes to make a bag, because I do some sewing myself, mainly various types and styles of bags, and protectors for my metal detector control heads. I decided to retire in 2019 and enjoy life some more, and ultimately I broke down, spent the time and effort, and made my own finds bag. Like a lot of folks here, I went through the bags from Home Depot and Lowes, only to be disappointed. My son has a small sideline business making Dopp kit bags, so I told him what I wanted to do, and he gave me a bunch of his drop off and end of roll material. I made the first bag from cheap cotton duck to see how I liked the tool placement, and then made the next one putting my digger and pointer back to back...it’s that way because of how I hunt.
My detecting buddy wanted one, so I made one for him that didn’t have the frills I put on mine.

Here’s the prototype from cotton duck fabric on top of the goodies he gifted to me... 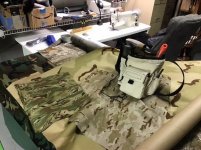 Here’s the modified version that I’ve been hunting with for the last couple of hunts. It actually has too many bells and whistles incorporated in it, but it fixed the problem of coins slipping between the bag and me because of the original bag had two belt loops that would bunch up, creating a gap between my hip and the bag. You can see the quick fix on the first bag to alleviate that, and then I made a one piece loop for the belt so it could not happen again. 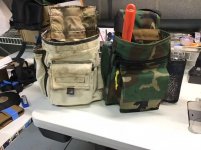 Then I couldn’t find a belt that I liked, so I made one by folding three layers of 1000D Cordura on itself, and used the hardware from a belt that was made from soft cotton webbing. 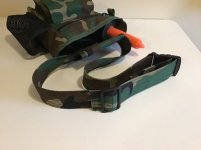 Yesterday I made a version that’s simpler. It incorporates a pointer pouch with a hand digger pouch on the same panel, a coin pouch that has the bottom half made with heavy coated mesh so that dried dirt can sift off and into the bottom of the bag, and a front zippered pouch with a heavy duty YKK zipper. Inside that pouch is a loop for a carabiner so I can put my van keys in there if I want to. There’s also a loop by the pointer to attach a lanyard. The next bag I make will have these loops replaced with D-Rings. The loops are actually a pain to work with. 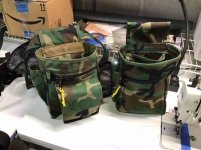 The point of this is that you can probably talk someone who sews into making a bag for you, or make one yourself if you’ve got access to a sewing machine. These bags are 8” wide x 4” deep x 11” tall...that’s the finished dimensions. I took them to my club meeting last night, and a lot of the people thought they were too tall. But I made it tall because I dig a lot of trash, and have had to stop hunting to find a garbage can or take the trash back to the truck. That won’t happen again!

Now I’m going to make mesh bags for me and Mama when we head to Florida in three weeks. Hopefully that will keep the sand to a minimum in her Santa Fe Sport.

Excellent job on the creation of a finds bag Joe. Thanks for showing us!
G

Purchased one of Joes custom finds bags. Got it a few days ago & finally got take it on a test run. I must say....great craftsmanship, heavy duty construction, plenty of “pockets” but not too many, nice size “trash” pocket. Well worth the money! Thanks Joe! 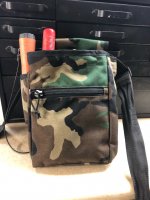 Which Wireless Headphone to Choose?