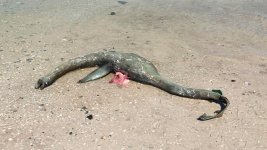 Shocking pictures of a Loch Ness Monster-type beast found on a U.S. beach have sparked talk Nessie could have moved stateside.

The mystery creature was reportedly found on Wolf Island, Georgia, by a father and son who were out on a boat trip, The Sun reported.

Father Jeff Warren spotted what he said he thought was a dead seal lying in the surf, according to First Coast News.

But upon closer inspection, Warren said it became clear he had no idea what the animal was.

Images show the supposed carcass, which Warren said was being eaten by birds when he arrived, lying in the sand.

It appears to have a long tail and two fins, as well as a long neck and a tiny head — features usually associated with Nessie in popular culture.

The creature was reportedly about 1 or 2 meters in length.

Experts have so far been unable to positively identify the animal from the photos and video footage.

Dan Ash, director of the Fish and Wildlife Service, told Action News Jax that some sea animals have a way of decomposing where they can resemble a prehistoric creature.

He said a 9-meter basking shark can end up looking like it had a long neck and tiny head.

Alternatively, the “creature” could also be a simple hoax.

Warren said he was later told about a local legend named “Alty”, or Altahama — Georgia’s own version of the Loch Ness monster.

The creature is used in advertisements to attract people to the area.

There are legends of monsters living in a number of places around the world, including Morag, in Loch Morar, Scotland; Lagarfljot Worm, in Lagarfljot, Iceland; Ogopogo, in Canada’s Okanagan Lake; and Lariosauro, in Lake Como, Italy.

what the heck is that

Hope it had siblings still around

It doesn't appear all that decomposed to me.

Down in GEORGIA, USA! LAWDY!

Naw.......... Not until some dumb tourist starts poking a stick into it! Then it's run up wind fast. As kids we used to bury dead fish a foot or two under the sand then scrape the sand away when the tourists arrived. Or in the middle of the volley ball courts by the Balboa pier. Hey we were kids & were bored.
G

The problem is that sometimes "mythical creatures" are real animals that just haven’t been discovered yet – probably worth remembering that an ungulate the size of an elk was “discovered” in Vietnam just in the last decades. But that animal wasn't new to a local Vietnamese who lived in the area and knew all about them, it was just that scientists hadn’t confirmed it. According to the article, a team of Australian scientists is heading to Scotland's Loch Ness to finally sort things out using the most modern DNA sampling https://www.canberra.edu.au/researc...to-unlock-the-legend-of-the-loch-ness-monster.
R

I got a longer story from the late 1890's on an attack off the coast of Washington.
R

Montauk Beach, on Long Island, NY also have had some strange ocean critters up there,

There are no strangers-only friends we haven’t met yet.
You must log in or register to reply here.

'Mercury in retrograde': Should we expect 3 weeks of bad luck?