Musket action found by sprailroad and requesting help to ID

Hello, my friend Dave or sprailroad found an old musket on a property we were metal detecting. I found this property from an old metskers map from 1937. When Dave found the musket it was very rusted of course but when he soaked it in vinegar then did electrolysis on it, it cleaned up relatively well. He was able to find some numbers and symbols which i would think ID the gun but his research came up with nothing. If you guys can help we would appreciate it. If your interested in seeing the video of the musket after it was found here is a link. We didn't get the video live unfortunately which is why dave is getting a camera on the next outing, lol.


Thanks guys!
Brian May (dirtbandit)

Can you post pictures from different angles? Those are just assembly marks, can't tell much from them. The model 1816 had a brass pan, could be from one.
Upvote 0

Great find, I also would like to see the side plates and the whole gun.
Upvote 0
S

Good morning fella's, I've just now seen this post, a surprise. OK then, I did not find the whole gun, (would that be something) only the what I call the side plate? It has the hammer and frizzen?, (OK, strike plate) attached to it along with the brass flash pan, it even has a chunk of flint still in it. I believe in the above video, you'll be able to see the piece as it was found out in the field. it was a lump of dirt/clay and rust, but could see right away what it was. A couple of days in a vinegar soak, a couple of days in electrolysis, took it down as far as I was willing to. Now, on the side plate where any ID would be, nothing, toasted away. The ONLY markings to be found are on the flash pan itself. There is the letter V, and two smaller letters, BW, and also what appears to be a number, 7. On the bottom edge of the pan, on the inside where it would not of been seen in it's day when assembled, are XV II. Nothing really to go on, and could not find anything about them, other then on-line I've seen mentioned the "V" meaning view mark? or not. Knowing a lot of very little for flint locks, I of course went on-line and found an over kill of information. Now, my GUESS would be say a model 1816 Springfield, same thought as l.cutler's, of which I believe were made up until about 1840? The pictures above were done quickly couple of nights ago at a club meeting. Next time Brian is over here we will get a full picture of the piece.
Upvote 0

l.cutler said:
Can you post pictures from different angles? Those are just assembly marks, can't tell much from them. The model 1816 had a brass pan, could be from one.
Click to expand...

Here is a copy that I clipped from their YouTube presentation. I enlarged it a bit so the detail can be seen a bit better. Maybe it will help with an ID for them.

That is one cool looking piece of History. Congrat's to you on a great find and save.
Upvote 1

Nice! Can we see a pic of the whole thing after cleaning?
Upvote 1
S

NOLA_Ken said:
Nice! Can we see a pic of the whole thing after cleaning?
Click to expand...

Yes sir, Brian was over here today, and took a new picture of the "after" cleaning. Should be posted soon, and it will show as a nice little display piece in my fort. Nice job on that photo to creskol, that again was right after I found it, after the cleaning, in the picture, you might be able to see that there is still a chunk of flint in it. In that area along with that find, we did also come up with two horseshoes, a VERY toasted pocket knife, been in the ground a long time, what we think was/is a cow bell, old spoon, and a 1" bell, looks to have been cast of lead with a brass coating. At the time we thought we were on public land, but with a GPS reading, found it was private land owned by a institution. Well....Today, we went there to try to gain permission, make a good appearance, and give our best shot at presenting ourselves and our interest etc. Was not very hopeful to be honest, but had to try. Well,......it was a YES,YES,and YES!! You couldn't slap the smile off my face I'll tell you what. Rain should clear up Monday, and Wed. or Thurs. we will go back. Mabey something, or perhaps nothing, but you know we just MUST go back, how could you not. What we did find was in about a two hour hunt, next week, it will be longer. You fella's know what I mean. I'm sure there will be several trips to follow. In fact I feel so good about it, I'll take my wife to dinner later.
Upvote 0 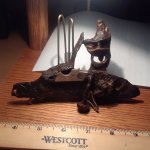 I'd look into getting possession of that coupe in the video's thumbnail!
Upvote 0

The brass plate with the curve in it has me scratching my head...
It looks like something used in a conversion to percussion with the curve fitting a drum for a nipple.
Flint was converted to percussion. Imagine they could have been reversed too , but am not familiar with such.

Not saying this flash pan matches the one pictured. Just what I found in a search. ( Type II Model 1816 Springfield flintlock musket.)

To avoid confusion ignore the thread title on the following link. (The original subject was a different gun.)
Check out the last post on page two for a similar flashpan.https://civilwartalk.com/threads/confederate-flintlock-musket-converted-to-percussion.146437/page-2
Last edited: Jan 17, 2019
Upvote 0

French M1777 Musket would be my vote/guess! Here's the backside of the lock assembly from one....notice the presence of the brass piece and the similarities of the hammer shape. 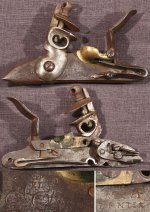 Could be French, but bear in mind the US m1795 and the subsequent m1816 were modeled directly from the French muskets.
Upvote 0
S

Wrong picture Brian! Anyway, that's the backside of it fella's, really, the front looks a lot better. Perhaps something got hung up somewhere or something, we'll try again. I see what happened, his 2nd attachment did not go through.
Last edited: Jan 18, 2019
Upvote 0

It looks like a lock from a US model 1816 musket. Nice find! 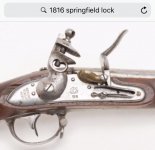