So the boys are back with their heavy machinery...

Digging up the truck load of silver and the buried treasure ship.

So far they have only made 138 episodes... So it seems reasonable they will need another 20+ to find anything of value...

So the boys are back with their heavy machinery...

Digging up the truck load of silver and the buried treasure ship.

So far they have only made 138 episodes... So it seems reasonable they will need another 20+ to find anything of value...

As Monsters and Critics said: "But what projects could the guys be working on and what are they hopping to dig up?" (The image above matches perfectly! ) 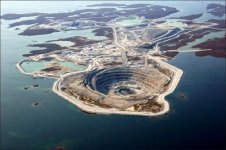 Although not exactly season 9, it's some insight local to oak island and touching on experience with the show personalities.

Tonight Jack Campbell and I have the honor to host Karen Publicover. Just like it says on her Facebook page "Oak Island From the Other Side of the Causeway", Karen will be sharing some of her stories, theories and pictures of Oak Island and the Oak Island Tours team.
Click to expand...

If you missed this week's show, you missed a Drilling Down episode of the top 10 never before seen finds out of the 2000+ finds of season 8.

The Top 10 Never Before Seen Finds must be some pretty lame crap if it didn't make the cut the first time given the junk they did show.

I'm sure Mel Fisher heard all this negative B.S. for decades ...and then one day
>> https://www.maritime-executive.com/...luable-shipwreck-the-nuestra-senora-de-atocha

Mel Fisher was looking for a ship known to have sunk in a geographic area.

They aren't comparable as to either quality or legitimacy.

freeman said:
Mel Fisher was looking for a ship known to have sunk in a geographic area.

They aren't comparable as to either quality or legitimacy.
Click to expand...

The real treasure is the tv revenue from sponsors, as long as the ratings are good they will continue to collect the "treasure".

And the lead cross Drayton found on Oak Island(a direct match to the cross in France where the Templar's spent their last days) was bought in Walmart... LOL

... Oh and that cross was tested and found to of been made from lead mined(in the 1300s in France)...Really ?
https://worldhistory.us/medieval-hi...guilty-french-king-and-the-scapegoat-pope.php

So then it sounds like some people think the Cross was a "Plant", "planted" on the island.To further the hoax/fraud/lie (of the show)....Really ?
Well that only leaves a few people Drayton,the producers of the show, someone on the film crew,the brothers. You know how silly THAT SOUNDS.

RTR said:
So then it sounds like some people think the Cross was a "Plant", "planted" on the island.To further the hoax/fraud/lie (of the show)....Really ?
Well that only leaves a few people Drayton,the producers of the show, someone on the film crew,the brothers. You know how silly THAT SOUNDS.
Click to expand...

I know the man that Drayton replaced, he quit because they were more interested in show advertisements and dragging out the search to get more episodes than searching and finding something.

Well the 'lead cross' hasn't and didn't end up 'rewriting history' did it now. Monsters and Critics is a clickbait website that has a lot of words but never says much.

Seems to be there is too much suspicion regarding it when you examine what and when it happened for anyone to take it seriously, except Monsters and Critics who need to reach a word count.

It wouldn't take everyone to be in on fabricating a find like the cross. It would take one person.

That person would be someone high enough up in the production company that had realised that though filming metal detecting was producing enough filler for each episode, turning up rusty nails isn't that exciting. So they decided to give the show a helping hand in the form of a controversial find.

The problematic part regarding the cross is that Rick was sent to France and taken to see some particularly shaped carvings, "Look Rick, look at these. They were carved by the Templars with their teeth. Are you looking at them Rick"?

And upon his return:

"Gosh Rick, look what turned up as soon as you got back and right where the taskings for today said to dig. And in case you missed it, It's the same shape as those carvings you were just shown in France."
Last edited: Oct 6, 2021
OP

As well as those points raised by freeman above there are many other reasons to find that piece of lead as nothing more then something like a fishing sinker.

1. The area they recovered it from is placed on top of where all these structures that were built in the 1750ish times. On top of this the areas were dug up by numerous other searchers. This piece of lead was sitting on the surface so 'most probably' dropped quite recently.
2. They found lead from the same source/mine as part of what they assumed was the lead frame of a stained glass cabinet window when detecting the area near Smiths old cottage (I think it was Smiths may of been someone else). This would support the lead found at Smiths Cove was most likely from the same settler that had the same lead as part of their furniture.
3. That cross image from the old prison is also on the gift shop images from that prison so it was possibly known about before they even visited the prison.
4. To imply that that particular piece of lead was the same as the other image of Christ on the cross would mean the "Templar" nailed a hole through Christ head so he could wear the cross of Christ.
5. Their are no other Templar images of Christ being displayed like the "tooth carved" graffiti from the prison. This was not a way the Templar's displayed Christ according to any other historic source or evidence.
6. No actual historian/archaeologist has supported their assertion of the piece of lead being linked to the Templars. This view is only been offered by the Laginas and their staff. They have not sought out a single actual expert to review their claim.

To simply make an outrageous unsupported claim about something you believe is a significant historical artifact without offering any support, proof or even expert opinion does not make the claim one that any reasonable person should take seriously.
Last edited: Oct 7, 2021

freeman said:
Mel Fisher was looking for a ship known to have sunk in a geographic area.

They aren't comparable as to either quality or legitimacy.
Click to expand...

Gidday amigos I cannot sum the Oak Island saga in words any better than that.

That sums it all up.

Granted the cross as they showed it on tv atleast was found less then a foot deep, but is was in an area that had been washed in/out from the winter storm tides. ( they mentioned this on the episode at hand ) Who knows how deep it might have really been the year before assuming some of that area got washed out, or maybe it got washed in from further out in the ocean! Just because it was found close to the top of the ground by no means means it was just recently dropped/planted.. Sure it could have been just as virtually everything on the island that has been found if you want to think that way..
You must log in or register to reply here.

My take on Oak Island