Summer Was All Wheat Cents, Fall Brought A Little Silver

Howdy Folks, it's been a while since my last post. As the title states, all I have been finding is wheat cents. I couldn't get my coil over a piece of silver for nothing. I didn't work the city as much this year. The places I was getting into wasn't producing anything worth noting. I guess I got tired of digging so much trash with no good results. Farmers started harvesting the fields and I was getting into any one of them that I could. Finding LC's and IHC's sure made me feel a lot better.

So I'm going to start out with my hunts from the last couple weeks. I caught up with one of the farmers who has given me permission to all of his fields. He told me of a field that he leases from the owner and there use to be a big house and barn on the property. Long gone before his time and he's in his 60's. He told me where in the field and so I got started. I started gridding the area and wasn't finding much other than trash. I then moved to a different part of the field finding more trash. I then got a nice 84 on the VDI and popped the plug. Still, in the hole, it was now an 87 and not sounding so good. It was a small lid with a pull tab top. Moving along I kept getting 82 and 84 signals which turned out to be trash and more slaw. I got another 84 VDI and popped the plug. It's in the plug and now reading 82 with a trashy sound to it. Thinking more can slaw. I flung the shovel from over my shoulder to flatten the plug. As I hit it, I saw a little round piece of silver come out of the plug and plop back into the hole. Looking down into the hole and seeing it, I thought finally. Turns out to be Seated Dime. Looked at the date and couldn't believe it. I have found four Seated Dimes thus to date. Three out of the four are dated 1877. It just seems odd to me. It started getting dark. I was making my way back to the car. Got a solid tone and plucked a lead seal, with no markings, out of the hole. The next day I had a couple hours to hunt. I made my way back to a field where I've found Minnie Balls. I dug a little deeper into the history of the area and I think this was a Civil War Training Camp. I found a handful of them and then it got quiet. I was happy with what I found but have yet to find anything other than Minnie Balls. No buttons or anything else of the time period. A couple of the pistol bullets look old because the lead looks the same as the Minnie Balls. The next weekend I got out on a Sunday. It was windy and I chose to make my way out to some woods. I dug a handful of brass headstamps this day. Kept hoping for a nickel but it wasn't meant to be. Once again I got a nice 84 on the VDI. Popped the plug and it was now reading 82 in the hole. Loosened up the dirt and fished out a 1947 Roosevelt. Not much after that other than a neat button. If I was to guess I would say early 1900's. So that's it for the last couple hunts. I will put up some pictures. Some of them being from hunts over the last couple of months. 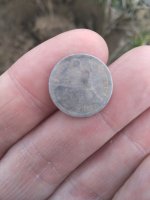 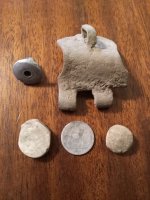 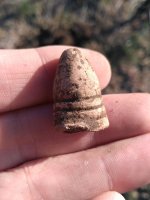 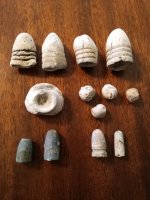 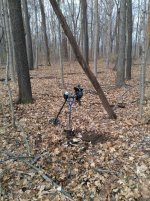 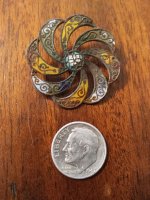 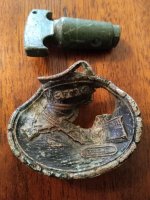 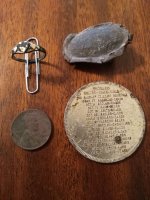 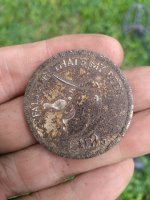 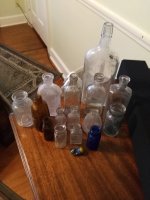 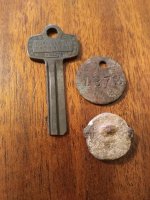 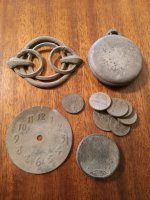 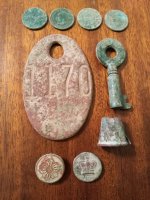 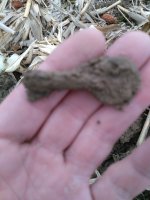 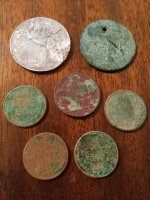 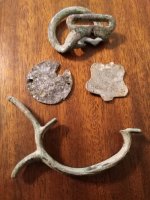 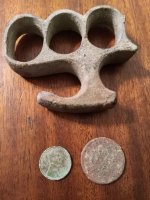 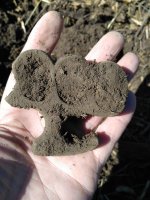 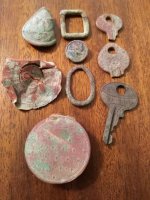 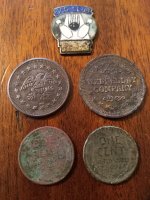 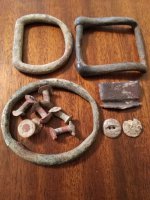 Thanks for looking. I wish everybody a Merry Christmas and a Happy Hunting New Year. SD

I only got out a couple times due to health problems mostly but did manage a little silver, going to get out in the spring some if it kills me. HH
OP

wingmaster said:
I only got out a couple times due to health problems mostly but did manage a little silver, going to get out in the spring some if it kills me. HH
Click to expand...

Hope your health gets back to the good. It's no fun when you want to get out but you can't. SD

fishstick said:
Those are some GREAT finds there Dave!!!!! CONGRATZ.....
Click to expand...

Thanks fishstick... not much to report on lately. How about you? Are you getting out any?

ShovelinDave said:
Thanks fishstick... not much to report on lately. How about you? Are you getting out any?
Click to expand...

Congrats on the Capped Bust dime. That's still on my bucket list. Actually, anything with a Capped Bust is on my list.

Huge congrats... I'll be looking for the post. SD
You must log in or register to reply here.

Scratching At The Surface