Went back out to the same, general, area as yesterday. Near an old river ford and some other river structures.

Found some more old padlocks. One looks like a WILCo, maybe an old signal lock for the railroad. The other doesn’t appear to have any markings. Both a little toastie but the WILCo isn’t too bad. 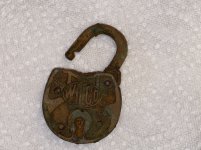 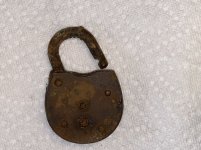 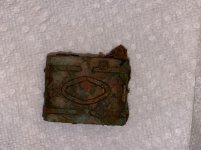 The next two are a first for me and on the wish list.
Found my first Indian Head penny. A 1902 and a little rough but still can make out the date and features. 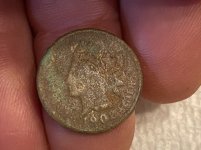 The second was my first harmonica reed. Near the surface under some rocks. 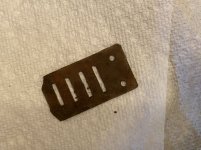 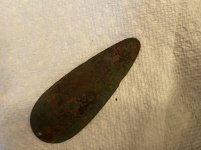 I’m amazed by how many good targets I’m finding. Expected to dig a lot of beer cans and pull tabs. Have only dug 1-2. Majority of signals are non-ferrous. I dug a lot of unidentified copper and brass objects. Seems like the worse things you find at the river are lead sinkers...and I don’t even mind digging those. Lol.

I’m used to farm fields where 90 percent of what you dig are beer cans and big iron.

Also found a nice piece of an older crock. Didn’t keep it but thought it was neat. 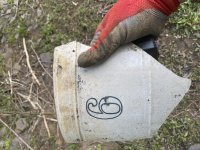 Yeah fairly certain it’s a 2. I see what you’re saying. The tail of the 2 looks like it curves up some but I can see the flat of the bottom of the 2. Looks like the 1908 S is a little more rare. Hey it’s ok I still appreciate the info and the heads up.

Awesome I saw the other lock you found and thought railroad also those are nice. Alot of old relics coming out of there thats a good sign keep at it ..........Tommy
You must log in or register to reply here.