"The Woman Lying on Her Back?"

It's been many years, so I hope I'm relating this correctly. I read on some blog or forum years ago (maybe even this one) that if you drive down Baylor Canyon road in Las Cruces, New Mexico, and at some point look toward a certain mountain range you will see three hills and "a woman lying on her back with her hair stretched out into the desert" and that this somehow relates to a treasure legend.

We drove quite a bit of the length of Baylor Canyon road to the south of Highway 70 this weekend. On the north side of Highway 70 it becomes NASA road, and it's not accessible to the public.

I'm just wondering if I remember the details of this correctly or if I'm mixing up several different stories (I said it's been many years).

Can anybody provide details on this? We just wanted to see the mountain range that looked like a woman lying on her back more than anything.
OP

I think Claudes Son posted here something about Claude showing him the Adams diggings .

clue to it is

3 small hills at a distance

I think I pointed that out while springfield and friend were with me , from a position in the Organ Mountains .

What I need to find now is some more details about this.

Now, here's the interesting part: looking at the extreme north end of the Dona Ana Mountain range there is a peak that looks like a woman's head with her hair splayed out. IIRC you can even make out her ear!

What I don't know is: are you supposed to be able to see her whole body at some angle or just her head like I saw? We were at the south end of Baylor Canyon Road when I could make out her "head".

Thats the wrong part of the country for The Lost Adam's Digging's even though people place it
in many obscure places, some of the Adam's accounts talk about the image of a women that could
be seen from the entrance to the zig-zag canyon, there's suposed to be the image a women in the mountains
in the Magdalana range but they say it has changed over the years, and another that can be seen from
Pie Town New Mexico, and there is a book out there that has a picture of the elusive women on the cover
supposedly taken by Mckenna or on of his Adams search crew, and they didnt realize they took it at the
time, and this researcher that wrote the book discovered it while going through old photo's and feels it is the
key to selling lot's of book's, no no I meant finding the lost Adam's Digging's.

BIGSCOTT is referring to "Our Lady of the Mountain", a rock/tree/brush/shadow formation near Magdalena NM that folks say looks like a woman's head.

Roger Snow was apparently referring to a hill visible from Baylor Canyon Road in Las Cruces NM. I was one of the two guys with him that day that he mentioned in the old post you found. But, honestly, I don't remember Roger pointing out such a thing to us. He may have, but if so, it didn't make an impression.
OP

sdcfia said:
BIGSCOTT is referring to "Our Lady of the Mountain", a rock/tree/brush/shadow formation near Magdalena NM that folks say looks like a woman's head.

Roger Snow was apparently referring to a hill visible from Baylor Canyon Road in Las Cruces NM. I was one of the two guys with him that day that he mentioned in the old post you found. But, honestly, I don't remember Roger pointing out such a thing to us. He may have, but if so, it didn't make an impression.
Click to expand...

I found a pic of "Our Lady of the Mountain" and it's not that impressive.

Here are the Dona Ana Mountains from Baylor Canyon Road. I know it's a crappy pic, but it's the only one I could find. Look at the peak to the far right: it looks like a woman's head, and when the sun is shining on it in the morning or early afternoon, it looks like her hair is flowing back away from her forehead. Her nose, mouth and brow are distinguishable in about the middle of the peak. To the left of that could be her "breasts"? but that's stretching the image a bit. When the lighting is right there is a formation that could be her "ear."

I just didn't know if you traveled further south, maybe off the road--that maybe that peak seems to merge with the other peaks and form a complete woman, body and all.

I know sometimes these mountain "images" take a lot of license to see. I personally don't think the Organ Mountains look much like a pipe organ, and the Las Uvas range only looks like a bunch of grapes at certain times of the day. 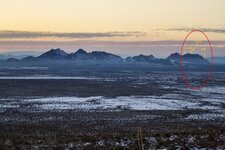 Drogo: I was just on Baylor Canyon Road yesterday for a hike to Dripping Springs. Sure is gorgreous country.
The Treasure of Victorio Peak came up on th eCity-data.com New Mexico forum a while back. Here are a couple of links:

And a book on it:

You are looking for Victorio Peak, on the White Sands Guided Missile Range, along WSMR S. Rte, 306.

there is a mountain range that looks exactly like a woman lying on her back. a fellow treasure hunting partner has seen it as well. this may sound too far fetched, but if you watch the movie "Seripham Falls", which was filmed in New Mexico; you will see the lady. you need to watch the segment with Brosnan and Houston in the desert scene. in the background you can see the lady on her back. it may take several attempts to get a good look, but she is there. me and my partner were shocked to see that landmark.
P

Sleeping lady mountain on Corralitos Ranch west of town off I-10 is probably what they are talking about
You must log in or register to reply here.