Where Does Bearing Sea Gold Come From?

Weird watching the Bearing sea shows and seeing gold just laying on the ocean floor. Where did it come from?

Also how far out does the gold go? Seems they're always close to shore
Upvote 0
A

Complicated question but also easy, first all the gold rich rivers flowing into area have been depositing gold into the area for eons. Also consider this, that at a time the Bering sea was once above sea level and was a land bridge between the 2 continents. The gold is everywhere there, back in the early 1970's I got to analyze samples taken from the Bering Sea by the Thomas G. Thompson oceanographic ship and all had gold in them. Storm wave action concentrates the gold along the beaches, that is why they are close to shore.
D

Easy like you said. At one time, sea level was up to 400 feet lower. so gold bearing rivers laid down deposits. The wave action does concentrate the gold, but it sounds like some of the dredgers are getting into the submerged river deposits that just got drowned as sea level rose. Especially in areas that have the big boulders.
J

One of the Miner's Journal did a story on that with a pretty awesome map. Showed where gold streaks were where the rivers used to run out into the ocean. Interesting point was there are actually layers so digging deeper is another channel from an even older river, stream or glacier deposit. Only it doesn't pay to get down there.
S

Most mining on the Bearing sea occurs in areas where glaciers pushed inland placer deposits into the ocean. Wave action and longshore drift then concentrated the gold. 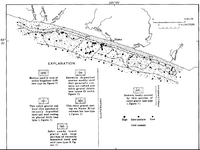 The areas around the shore have have been hit hard over the last 150 years because they were accessible. If you go deeper than diver depth (+/- 30 feet) and deeper than bucketline depth (+/- 50 feet) you will find great wealth...

I have to admit some of you guys on this forum are heroes lots of knowledge!!!

I've been dredging offshore Nome for 10 or 11 years, I'm one of the most successful ones out here, mining from 5 to 65 feet. The practical answer is that gold is where you find it.

The long answer, from reading the research of others is that a long time ago, magma formed a load deposit of gold in the mountains North of what is now Nome. The load deposit was eroded into placer by alluvial action and other forces of water, rain, rivers, glaciers, oceans. Most of the gold settled out in rivers and streams, which moved around quite a bit. During the second to last ice age, around 100k to 300k years ago, glacier action ground and carried the material out to the sea, which at several points in time was much higher and much lower than it is now. As the theory goes, where the glacier met the sea, it dropped out material, this is called a glacial thrust zone. There are several distinct "beaches" where glacial alluvial gravel with gold is found in significantly higher concentrations. The modern beach, 1st beach at about +15, 2nd beach, about +35 feet, and third beach about +50 feet (I may have these elevations off by several feet), these were all mined extensively 115 years ago. The richest was the highest elevation (the first gold to drop out), each beach getting weaker as it got farther from the load source (aka mother load).

In the ocean there are several defined "beaches", what they think were beaches. At -15ft, -30', -45', -60', and -80ft. The -80ft does not have any higher gold in it that background average. Background average in Norton Sound and Bering Straits is still higher than most areas, but not commercially viable to mine.

The gold bands also look sort of like a rainbow with one end near shore at Nome's Snake River and the other near shore at Jess Creek. There is a lot of ground out there that is not suitable to mine.

As others have pointed out, other actions after the glacial thrust have moved the gold around, rivers below current ocean levels, ice sheets, currents, aliens, all sorts of actions. Which brings me to the point where it doesn't do much good to know how the gold got there, the gold is where you find it.
M

The aliens did it . Lol

It has washed out there in my opinion from the American creek... and Nome River... over time... then has been scattered in the sea.
P

Gold, whether natural or in the form of coins, rings and such, behaves differently on the floor of the ocean than it does in fast flowing streams. A piece of gold sitting on the ocean floor is basically a heavy weight sitting on sand. That piece of gold does not want to move very much but the sand around it will move. You might think that piece of will keep working its way down to bedrock or some kind of clay layer but it does not. Sometimes the sand covers the gold and sometimes the sand uncovers the gold. This is why underwater metal detectors find gold rings lost many, many years earlier and covered by only a thin layer of sand.
You must log in or register to reply here.

Miners file for injunction in SB!

P
Where did the Aztecs come from?