I was metal detecting today with my trusty Garrett Ace 250 at my mom's new house in Sudlersville, MD (Upper Eastern Shore), which apparently dates back to 1910. I had detected there once before and had found a bunch of clad and a '57 wheatie; the wheat had raised my hopes for this hunt today. Found a lot more clad and a '41 wheatie, but the highlight of the day was this "belt buckle" that I had found several inches down after pulling out pieces of iron (thank god for my AT Propointer!) I was glad I avoided scratching it more than twice, but I had NO IDEA how incredible my find was until I got home. Considering the age of the house I figured it would be a Victorian era (late 19th-early 20th century) belt buckle, perhaps a civilian repro of a military buckle after I noticed the thirteen stars. NOPE! 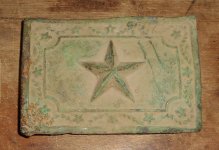 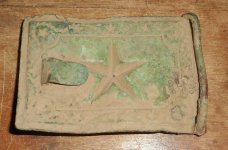 An 1877 atlas of the county shows a house near exactly where my mom's house is, and with the exact same shape!!!

It was apparently the residence of a "Wm. Nickerson"

I'll have to do more research on this guy and see if he was part of a local/state militia!

Big congrats. That's a bucket lister for sure.

BEAUTIFUL Buckle my friend! Congrats on THAT bucket lister!

Awesome save & really nice condition, congrats on the save

What a find! That's what I find so enjoyable about this hobby. You just never know what's going to come out of the ground. Kyle- your buckle is fantastic! Congratulations!

Oh and just like his, yours should get banner.
D

Congrats on that belt plate

I found mine almost exactly one year ago, June 16, 2018. Mine made banner and so should your's. My vote going in now!

P.S. I wouldn't get to aggressive cleaning it. Soft toothbrush and no water.
Last edited: Jun 11, 2019

Boom baby thats what its all about. Well done

Congrats. Nice find and not too far from me either

That is an incredible and historic find!

Finally touched a coil to that local yard