I didn't know eyeglasses were so expensive these days...I don't wear them (yet anyways...but prolly need them) and had no clue. I was contacted by a gentlemen today through an old acquaintance of mine whom I haven't seen in years. It seems people remember me as "the guy that metal detects". This is another example of - no good deed goes unpunished. This man lives in a rural part of Texas and on his way home from work yesterday evening he spots a little kitten on the desolate back roads to his house. He pulls over and after a short chase through the ditch he catches it. After returning home and giving the cat food and water he realized that his new pair of prescription glasses were gone from his shirt pocket. He rescues a kitten but loses his glasses. He goes back to the ditch with a flashlight but couldn't locate them.
When he called me this morning with the story I agreed to pick him up at his house so that he could show me how to get to the location. I took my shadow with a 7" coil and my Sidewinder with a 4" coil in case the weeds were thick. We get to the site and its a shallow ditch with short grass next to the road that got taller and thicker towards a ranch fence. He showed me some of the places he thought he bent down and I started scanning with the Shadow. I don't know why I didn't ask right away but about 10 minutes into the search I ask if he knew what the frames were made of...Titanium...uggh. I knew this was about to get problematic. Especially when he said that they were similar to the old pair he was wearing. However, the new glasses had frames that were smaller and lighter. His old ones wouldn't even read on the Shadow unless I was in all metal mode. I switched to the Sidewinder, put it in all metal and started gridding the ditch. Scanning in an out of the clumps of weeds and grass. Lots of signals so I just parted the grass knowing the glasses would be on the surface. After about 20 minutes I got a little blip as I felt my coil hit something in the weeds. I look down and there they were...barely visible. Luckily he had just walked through this area and didn't step on them. He was a happy guy. These glasses were only a few weeks old and he dreaded the thought of having to spend another 400.00 on a replacement pair. As usual, he offered to pay and I refused...but he made a counter offer that I couldn't turn down. Lunch at a nearby restaurant known for fantastic Mexican food. Yes, it lived up to it's reputation. 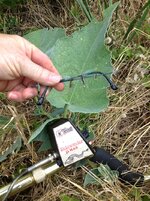 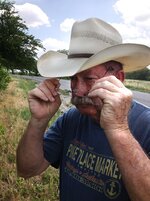 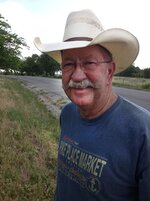 Outstanding garren. A bunch of good karma is on its way!
OP

Outstanding garren. A bunch of good karma is on its way!
Click to expand...

Thanks vpnavy! I could use some good karma right about now.

His smile tells the story.

He looks likes a good American hard working man & I am glad to see that you helped him out. Great job!!!
S

People like you help us all out good job
OP

GaRebel1861 said:
He looks likes a good American hard working man & I am glad to see that you helped him out. Great job!!!
Click to expand...

Thanks Guys! He was VERY happy to see those glasses!

You can tell instantly, when you meet this man, that he's good as gold. Salt of the earth...Texan to the bone.

Not much metal in those glasses. Great job finding them.

You can tell instantly, when you meet this man, that he's good as gold. Salt of the earth...Texan to the bone.

I've yet to meet anyone from the Great State of Texas that spoke English that I did not like. Great people out that way!
OP

SusanMN said:
Not much metal in those glasses. Great job finding them.
Click to expand...

Thanks SusanMN. I was getting nervous when I scanned his old pair and could only get a signal in all metal mode. I think it was the nose piece that saved us.

Glad you found them and yes they are expensive. Frameless and a no line bi focal easily run 400. Great job helping a person out. 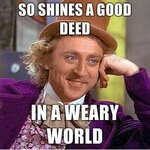 That leaf in the grass looks like a wild gourd vine?
OP

Produce Guy said:
That leaf in the grass looks like a wild gourd vine?
Click to expand...

Nicely done...I love the look on that man's face as he puts his glasses back on!

Now if that story doesn't give you a case of the warm and fuzzies I don't know what will!