heres a photo of what appears to be a hand and head shape,ancient? any ideals? thanks. View attachment 646060
E

this stuff is really cool but I always wonder "How did they do that?" move tons of rock and make stuff like that especially turn that rock over like that!

edat said:
this stuff is really cool but I always wonder "How did they do that?" move tons of rock and make stuff like that especially turn that rock over like that!
Click to expand...

These things were child's play compared to many of the stone edifices "they" built around the world.
OP

Hey, Dog:
That guy you circled in blue in the 3rd photo reminds me of the Jem 'hadar on the TV series Deep Space 9. LOL In that first photo, is that a multicolored plant in the far upper right or a chalked area?? The area I've roughly circled in yellow contains many stones that don't look natural in shape. Have you ever seen a rock fractured in such odd crack runs??.........some straight; some curved in a NATURAL situation? 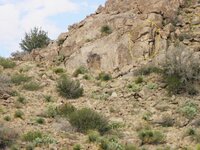 Dog, look at 4-17, under the right third boulder down. You see a dark line? There is a dark letter that is sideways.look at dark half circle on boulder.above it under the boulder you can see a circle.
P

When someone like the church leaves a map or description in writings, what I have found is that the written document may be good but others made changes to through you off. Yet the markings on paper, like a fish or any other drawings are real.the problem is that the fish will be carved on boulders and stand 20'and high but it won't give you directions of its location.
The latin hearts is a good example as well as the cross stones.but they all exist.
The peralta stone maps are the same.each marker are in different places. The dagger has a dark line comming off of it and leads you to a dark circle.this is the same location of the tunnel enterences. It verifys that you found it. But makings like this one is at the end of the trail. You have to find the trail and follow it.
The jesuits were real deceiving.I located one of the locations by first seeing scribbling on a flat boulder.then you have to look in the distance to find the real marking. In the distance I could see what looked like the torso of a person. But the key was to find the head.I moved around and found the head it had tall bishops hat and was located on another boulder that was upward and behind the torso.once they were connected it was a bishop standing.next you had to figure out what your sopose to see next. What I found is that the head was the location to the entrance. On the shoulder of the bishop is a silluet of a woman.she is looking for heart shaped stone that is enbeded in the ground that told me where the treasure is located.to my surprise I found a large statue of the vigin mary.it was looking down at the treasure location.if I hadn't found the other markings I wouldn't have found her. She is carved very crudly but thats so you won't see her from a distance.
Now i will tell of a treasure further south toward the mission of tumacacory.near the mission but not on its grounds is the large church treasures and mines.this is the treasure of the vigin de Guadalupe also called tumacaccory. Again there was no starting place. I verified finding the treasure mines by first finding the markings to this mine.again you'll see how clever the Jesuits were. I was walking and takings photos of different mounds of bolders.I'm sure I had seen something out of the ordinary but saw it perfectly after the development. Of the photos. A large church shadow of a priest was laying on the ground.one arm was extended upward and in the hand area was a skeleton key.to the left side of the key is a shadow of a keyhole you put a streight line from the tip of the keyhole, through the keyhole and follow it up a hill till you hit the mine symbol.symbol. remember that it is written that the door was forged out of copper on the grounds of the mission and dragged by oxen to the mines tunnel entrence..I wish you all the best of luck. But first here is a hint.on the mission grounds there is a marking on the ground that is a giant clue to treasures.but the treasures are not on the grounds.good luck
D

Hello peralita, looks like the more valuable a deposit the more complicated the trail is to follow, I agree the Jesuit were sneaky critters, but from my experience they had certain patterns with a few variations and once you learn the secret, is when you start the process of learning, I do feel that the written maps were perhaps destoyed so we have no way to verify what would be a wonderful learning tool. The same way a larger drill hole lines up with a smaller one to indicate a direction and seems to be something at or nearby to show the distance, smaller the symbol the shorter the distance. Thanks for your imput, very vaulable
P

Hello dusty, there is one treasure map you can learn from, the latin hearts. Its real I located it.
D

Hello peralta just think about ALL the information that this group of folks have have and won't share except for a tiny portion, yes theres a lot of information avaliable kinda like a ball game, several players, but most are specators just watching, some are there just to tell you how game must be played, refree's and such, still everyone enjoys the game. THANK'S Everbody
OP

hey shortstack, i think that is a plant in that one photo in the upper right. ill have to look on you tube for deep space 9,i cant remember that show,iam sure i seen it though.yea that thing is the most alien looking i have found,its odd for sure. i think your right on those cracks in the stone,they look placed. there is some odd stuff out here for sure.
OP

ancient tablet? i guess i should have looked at the back of it for markings. View attachment 675515

dog said:
hey shortstack, i think that is a plant in that one photo in the upper right. ill have to look on you tube for deep space 9,i cant remember that show,iam sure i seen it though.yea that thing is the most alien looking i have found,its odd for sure. i think your right on those cracks in the stone,they look placed. there is some odd stuff out here for sure.
Click to expand...

Hey, dog, here's a screenshot of the Jem'Hadar I just pulled from YouTube. Compare the profile with that rock I marked.

) The profile from the top of the head, around the face and chin and on around the chin line to the back of the head. When I saw your rock, these guys were the first thing I thought of. Now, did the Spanish watch DS-9 ?? Obviously NOT. But, the coincidence is astounding.

Perhaps it's the common devil / demon look that connects them.

dog is that a death trap? looks like if you moved the tablet the big rock would come down.
OP

thanks for that u tube post ss,ill have to watch some clips. it is strange,some of the stones you see that sure look alien.
OP

billythekidder, it sure could be a death trap. good call on that, without knowing that there is a lighting bolt in the area, that hadji had picked out. i also like the other things you spotted. i have another site, that has a head profile with the hair blowing back like that.
OP

hey shortstack, you dont hear much about the dark side and its relationship to treasure. glad to hear you bring it up again. what do you think the demons and devils have to do with treasure? any thoughts? if was used and by who?
dogtth View attachment 676166

Well, dog, that is a good question. Since I am not a learned person on the subject of early Spanish explorers and their religious practices, I cannot say with any certainty that they used devil / demon likenesses. BUT, I have a hard time believing that they actually WOULD. Consider the time of the Inquisitions, not to mention the normal fears and superstitions felt by, not only the Spanish Conquistadors, but the Mexican peoples, too. Their Catholic based religious practices are filled with icons for every saint imaginable, in addition to the ones for Jesus and Mary. Would the ACTUALLY construct icons for the devil or demons........even in shadow forms or carvings on the trails to their "workd sites"? We are told, by the experienced researchers, that each expedition was accompanied by a Priest or Padre. Would THEY have condoned the use of any likenesses representing the devil or demons?? Good question. They did allow and , sometimes even instigated the mistreatment of the indigenous peoples they encountered in Mexico and the various sections of what is not the US. In some cases, even allowing the execution of some for some perceived heretical reasons.

I wonder if some of the horned, shadow figures could represent another group of people.........such as the Vikings or the groups from the MeseoAmerica area. Doesn't some of the masks used by the Aztecs, Incas, and Mayans have horns carved as part of the headress portions?? The native American tribes of North America had some Medicine Men / Shamans who used headresses with cows' horns attached.

There is a wide area of history that needs filling in by someone who is not afraid to buck the "conventional wisdom" of the main stream science community. There are a few "out there", but not enough........yet.

I wasn't going to mark anything on these last 2 photos, but I couldn't resist for long concerning the second one. I connected the 2 circles because the shadow figures look so much alike in the different areas. That's a long legged bear on the left edge, in the square.....with what might be some 20th century spraypaint graffitti above it in that other square....."6, 7, 9" ?? The other 3 squares enclose some interesting things to look closer at for clarity. The lower one in the center of the pic, seems to have a recessed area with a rock "head" hiding a cavity?? In the upper, center left square are what looks like several large carved letters. The right square (upper center) has a black triangle, a black tombstone (or shield) shape and a carved, long faced head. The square in the upper right section has a long, faced head carving.

There's several other things, but to mark anything else would just clutter up the pic.

EDIT: I forgot to mention the square just to the right side of the bear. There are some shapes that look like raised, carved figures.