Another season ..is this a joke?

Maybe it is a joke on those who including myself who watch this show. Good hunting and good luck.
B

Yard Waste said:
You do realize that anything Pulitzer says is a joke. He has been discredited so many times, I can't believe anyone would still quote him.
Click to expand...

Hutton
wasn't on the show, I added the info he posted on FB for the sake of more info.

Shame on the Lagina Brothers for once again introducing and promoting an unverified item. 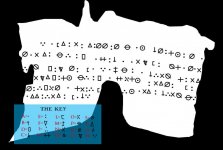 I am talking about the new introduced “Decipher Map”.

After the “Roman Sword” it should have been clear to the Lagina Brothers to have the paper and ink tested for authenticity before presenting any assumptions.

I am suspicious that this copy shows a Too Good of a Condition for any 14[SUP]th[/SUP] Century Map.

I have in my collection, a 1632 ad King Charles I Bible... and even printed on Indian Cotton Paper and preserved against light and moisture, the ink notes added are badly deteriorating.

I believe that this “Decipher Map” was created after the “Decipher Stone” was located in the 1800’s.

These Impostors showed their hand by stating what their Map’s Top position was to be, thus insulting what little knowledge of Hebrew they may have had.

Looks like they found "the hatch".....
An opening to a septic system Dan Blankenship had installed in the early 60s
OP
G

Eldo said:
Looks like they found "the hatch".....
An opening to a septic system Dan Blankenship had installed in the early 60s
Click to expand...

Batten Down The Hatches!

It would be “Very Hard” for me to accept that “Samuel Ball” who owned lot 24 just 50 feet from where the “Decipher Map” shows a “Hatch Entry” presumably proceeding down into the “Money Pit" and him being unaware of this!

I believe while he was cultivating 9 parcels of land into “Cabbage Patches” and was the “Original Locator” of the “Oak Island Money Pit”, he was absolutely aware of every “Nook and Cranny” on this Island.

I mentioned in an earlier post that the 'hatch' looked like nothing more than a old septic tank that was now filled with debris as is normal for these old units...

But, I did not know that Dan B had installed one in the 60's...if you have any kind of proof of that, it would show that the map itself is a phony suddenly 'found' just as they were running out of storyline to keep the show going...

Robot said:
It would be “Very Hard” for me to accept that “Samuel Ball” who owned lot 24 just 50 feet from where the “Decipher Map” shows a “Hatch Entry” presumably proceeding down into the “Money Pit" and him being unaware of this!

I believe while he was cultivating 9 parcels of land into “Cabbage Patches” and was the “Original Locator” of the “Oak Island Money Pit”, he was absolutely aware of every “Nook and Cranny” on this Island.
Click to expand...

Yep... But they do not know if what they are looking at is the actual hatch marked on the map (assuming the map is authentic). The dude just said he remembers a depression in the general area and they went to have a look. Why don't they get some decent ground penetrating radar and check the area rather then just digging holes on spec?

Remember in previous season they drilled a hole that they had established there was cavern (after the person showed the satellite map that showed treasure everywhere) their after using some type of explosion/sonar thing and found a cavern full of water. Why not do the same thing around the area where that map says hatch and vault?

It is very hard to imagine an extensive tunnel network built on this island with no evidence of tailings etc. Also every hole they dig they hit water so the people that where meant to be digginhg these tunnels would of all drowned I imagine when they flooded.

Robot said:
Shame on the Lagina Brothers for once again introducing and promoting an unverified item..
Click to expand...

Yep.. They do not have the original document though just a "copy" of them so no way to veryify them I would guess.

The other big issue here is that the stone tablet translated into English. This document is Portuguese.

It is hard to see that people using different languages would be using the same characters.

That would suggest that some like the Knights templer had there own alphabet and just used the characters to translate into there own European languages. If this was the case you would expect more documentary evidence of this hidden language.

I too doubt the authenticity of these new documents.
H

Tonight was not interesting, boring. Now they are searching a well.
K

Crud. I forgot to DVR it. I will have to hit the re-run.

Where did we ever see a portugese document translated?

They just told you it matched the 90 ft stone markings but never provided the full translations. Here is the stone from 90 ft showing its translation in spanish......

One in english with the Ff null.....the trap set.....one with a cipher wheel in Portugese to make a shut off....one in Spanish to create a further search off the island created with the h+o keystone and then the symbols are used to draw the final sequence of a symbol to use as a layout over the island.

Keith Jackson said:
Crud. I forgot to DVR it. I will have to hit the re-run.
Click to expand...

If you saw last weeks coming attractions, then you saw tonight's show.

Will Rick and Marty drain the swamp ? Will Rick and Marty get bit by mosquito's ? Will they contract a virus ? Can they finally determine where the coconut fiber came from ? Will this prove the presence of the knights templars ? Do the checks from tourism pay for their drilling ? Is the hatch truly the gateway to hell ? Will they ever get an answer to anything ? Did Rick blow an investment meeting by quoting.. There's a sucker born every minute ? Will next week bring a million more questions by the commentator ? Will we have to watch the same clips over and over again, as if we are stupid ? Will there ever be more than 10 minutes of new material in an hour long show.
B

From one of the Oak Island FB pages:

George Johnston I can't comment on how it is now, but History paid for virtually everything when I was there. Only company bought assetts that I know of were the old Ford Truck, a welder, various pieces of equipment (shovels, ropes, etc.) and a bus used by Friends of Oak Island Society that they used on the tours, that I purchased for them. Not sure if it has changed or not. In addition History/Prometheus pays salaries and for appearances on the series, along with a hefty disbursement at the end of the season.
B

Jack Begley is a "Volunteer" can you believe that...? 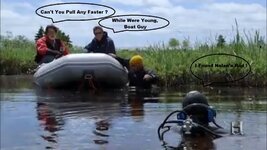 I guess if you bring in someone whose last name is Pulitzer then any idiotic show becomes credible.
You must log in or register to reply here.