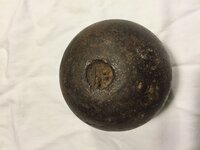 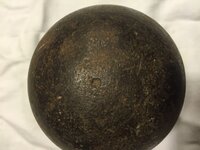 I know there are a few experts here on this subject so I'm hoping one can give a little insight. I found this a few years ago while cleaning out an apartment of an evicted tenant. My first thought was it could be a cannonball but the "holes" didn't make any sense to me. I didn't put much thought in it and just put it on a shelf because I thought it was interesting either way. So this morning I decided to try to find more information and have now learned that some cannonballs are in fact filled with explosives and capped off. The ball I have is 5 pounds 10 1/4 oz and 3 1/2" diameter. There is a hole on one side that is 5/8" diameter and possibly a second hole opposite of the first one that is 1/8". Any insight is greatly appreciated.

Red James Cash is "technically" right... however, the photo below shows an example of an exploding cannonball manufactured with two holes in its hollow cast-iron body. But, note that BOTH of the holes were ALWAYS filled by a screw-in metal plug. That was needed so the internal gunpowder charge's explosive pressure could burst the ball into fragments, as Red James Cash said. The smaller of the two holes was there so dozens of small (about .66-inch) antipersonnel balls could be loaded into the shell through its side -- thus it is called a "Sideloader" cannonball. The larger of the two holes was for the screw-in timefuze adapter-plug. Sometimes when relic hunting on civil war battlefields we find (dig up) one of these "Sideloader" cannonballs which is missing both of its screw-in metal plugs. But, note that the two holes are NOT "on opposite sides of the ball." They are typically located about 45-degrees to 90-degrees apart, just a few inches away from each other. And as I indicated above, the two holes are always "threaded" for the screw-in plugs. Two holes but no threading in them means the ball is not a cannonball.