🥇 BANNER I FOUND A RARE ONE - A PERFECT COLONIAL-PERIOD GOLD CUFFLINK!

I found this exciting colonial-period gold cufflink in a farm field about two weeks ago! 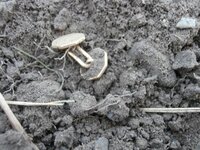 My research had indicated that a colonial-period house once stood somewhere nearby on the property. For several years, I had recovered occasional musket balls at the 100+ acre site but little else. Persistence finally paid back last year when I located the approximate house site along with three Spanish silver coins – a single two-reales coin and two of the smaller one reale coins (I covered that story in the 2013 issue of Silver & Gold by Western & Eastern Treasures).

This year’s follow-up hunt at the site is a long story, and I’ll hopefully write another magazine article for publication in the near future. I got a few pieces of worn and cut Spanish silver on the property this past spring, which I had posted earlier on T-Net. I only had time for a short dig late in the evening two weeks ago, and the gold cufflink was the very first target that I dug! I was amazed at the sight of gold at a colonial-period site. I spotted it in the dark soil immediately upon removing the plug. What a moment! I ran back to the car for my digital camera and took these pictures. I even shot some video, which I might post on T-Net (I’ve never worked with video online). 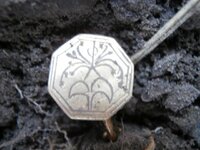 I only had about one hour to continue searching the site, yet I pulled up a 1782 Spanish One Reale, a complete knee buckle (the tongue and chape still swivel), a toasted copper, and one ever-present musket ball. It was one crazy hour of detecting and digging. 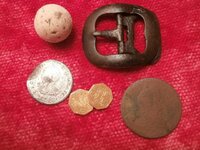 I found a beautiful silver Stuart Crystal cufflink in a nearby field back in June, which I posted up a few months ago. I figured that I could never improve upon that find in regards to cufflinks, but I was happily dead-wrong. I’ve been forwarding pictures of both cufflinks to some specialists – museum curator, etc. One curator of a well-known museum contacted me and described the recovered cufflinks and a dug silver bodkin as “pretty astonishing.” It felt good to receive such a compliment. The octagonal shape of the gold cufflink has a date range of 1750-1780. 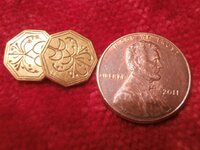 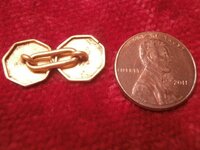 Gold jewelry from this period was fashioned from the melting of gold coins. Another contact that I made (a consultant to the Smithsonian) informed me that gold items of personal adornment from the 18th Century could only be afforded by royalty and the very wealthy. I was also told that examples of 18th century gold cufflinks are exceedingly rare, as only a small number of pieces have survived to the present. All the rest was melted down over the years or simply lost. I soon learned of the scarcity of such cufflinks, as a search of the internet (Google images, etc.) only produced two or three images of 18th Century cufflinks made of gold. The rarity of the find does not necessarily translate to value, as I would need to find the matching cufflink for a complete set to add substantially to its worth. Its value has limited appeal for me. I’m motivated by the thrill of the hunt and the thrill of finding colonial-period gold. If I was seriously interested in its value, I would contact an appraiser from one of those ridiculous reality TV treasure hunting shows (yawn). As rusted cooking pots are valued at $200 on some of the programs, I figure that the gold cufflinks would easily go for $1,000,000!

Do you think I can get that all in cash?

The museum curator was equally impressed with the Stuart Crystal cufflink, which dates to the mid-18th Century. The gold cufflink may have been made in England or the colonies, but the Crystal Stuart cufflink was undoubtedly made in England. This cufflink is made of silver with quartz over a delicate gold wire design. The curator kindly discussed both cufflinks by phone for 20 minutes or so. In exchange for her expertise, she only asked that I thoroughly document the recovery of the finds to establish a provenance for the future, and I assured her that it would be done. The curator also stated that the perfect condition of the Stuart Crystal cufflink was amazing for an object buried in the ground for 250+ years. She then explained that most examples of 18th Century Crystal Stuart cufflinks seen today are colored pink or red with a colored foil that the jeweler set below the stone. This was done for cufflinks with stones of glass or paste, as the color was used to hide the sight of any scratching of the glass that would eventually occur over time. The cufflink that I recovered has clear stones without a single scratch despite their long burial; accordingly, the curator stated that my dug example has true carved rock quartz crystals – certainly rarer than cut glass examples. 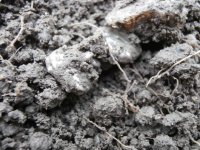 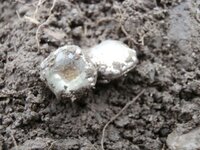 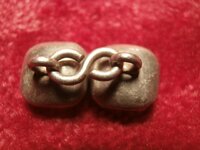 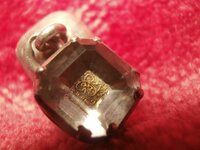 The condition of the gold cufflinks is excellent – completely intact. Treating/cleaning the cufflink when I got home was easy, as I just rinsed it under water. The curator described the engravings on the cufflink as “highly unusual.” Does anyone have any ideas on the engraved symbol? I’ve gotten one excellent suggestion that appears to be right on target, but I would like to get some more feedback to see if anyone else comes up with the same idea. In addition, does anyone also see a letter in the design for an initial? I would greatly appreciate any suggestions. The design and a possible letter for a last name initial may hint at who owned the cufflink from so long ago. My research on this person is what led to my long search of the site. This person was quite an interesting character, but that’s a whole other chapter to the narrative on this great find. 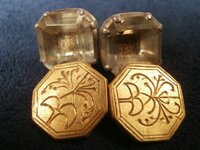 Sorry for the long post. I can’t write cliff notes when it comes to finding 18th Century gold!


Good Hunting to All!

Great find that is indeed and it's worthy of being up there on top. Great write up also as it's a good read and it should be with a find of this quality.

Absolutely y beautiful! Banner vote is in.....
A

Banner Worthy all day long ! I would guess the symbols on the gold cufflink could be related to the family crest of the owner . You have made
some shadowy references to this individual that you are researching - now I want to know more about what you've found out ! Fascinating ,
also it occurs to me that since the Crystal Stewart cufflink is of similar high quality - it may have belonged to a relative or even the same guy
who lost the gold one - since you said it was found in a nearby field .

Nice find, you should be happy with that.

There's a winner all day long!

If we think silver is hard to coax from a colonial site, the gold so rare it's unbelievable !

I don't give out my banner votes very often at all, I'll give this a thumbs up

My banner vote is in for the pair. I think both of them should be up there! If they were mine, I would wear them ~ to important functions with a nice suit. Gold in your right hand, silver in your left. That's a sign of a moneymaker, ain't it?


I'm in a good colonial site too but somehow I doubt I'll find any more gold here. I think this one was a fluke.
M

WOW!! Makes you wonder why the rich would be dropping cuff links ? If you are offered money don't take the worthless paper stuff ask for it in ingots!

beautiful! I don't see any initials or anything, but the design reminds me of a whale's tail splashing water

WOW Jim - what can I say?? Those are absolutely gorgeous and an incredibly rare find indeed. Wish I could help you with the ID on the design, but I don't have a clue. I checked out the gold finds on the Colchester website, and they had several cuff links but none to match yours. You can check those out at:

I'd love to see a pic of all your finds from this site. And it sounds like you're not finished there, so good luck to you and just maybe the other set will come to light. I put my vote in for banner. WTG!!

Those are just stunning...I've only ever found one gold cufflink half and it was very plain compared to yours...My vote is going in

Jim - I almost forgot, but last winter when our friend Beau came down to join us for a hunt he dug a cuff link with a gold setting and a large clear stone. Here's a link to his post so you can check it out.

nice find of gold cufflinks! It brought back a memory of a gold Victorian appearing gold cuff link I found in Alexandria VA back in 1972 and eventually gave it away to a friend, I had forgotten all about it. The one I found had two fixed studs on the back that were kind of shaped like a pickaxe, the front had decorative engraving and it was definitely gold, but no markings.

You have my vote, man! Absolutely stunning.

Truly amazing finds, both those cufflinks are very special indeed. Banner vote going in.
ZDD
You must log in or register to reply here.

Ugly!!!! But beautiful to me

a swing down Memory Lane with a newbie