I hit a new site today that I think dates back to the 1830s at the very latest. I was looking at the 1850s map ahead of time but it was terribly inaccurate... I could line it up with certain roads but then others wouldn't line up, this property was pretty big though so no matter which roads were actually correct on the map the site should still be somewhere on the land so I just said what the heck and started hunting. I started out at a hill and as it turns out I immediately began hearing the low buzzes of iron in the ground. After that I started finding some buttons, and then the 1850 large cent! At this point my day was made as it's the purtiest one I've ever dug but after a few more buttons I found another large cent, then another... and then another! I was hoping I might pop out a half cent or real but five large cents is a new record for me and I'll take it! Oh, and one of the matrons is dated 1817 which is my oldest coin other than a cash coin I found last summer! 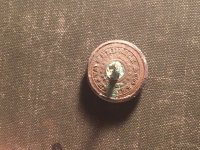 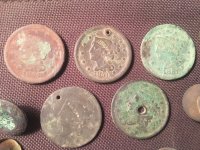 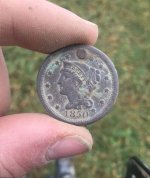 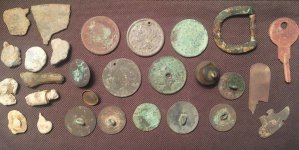 Happy hunting and thanks for letting me share these with yall! I have a good feeling about this year...
Upvote 22
I

IDXMonster said:
Little late to be on the board for 2020!

Lol! It always takes me a couple weeks (or months) for me to stop writing the previous year on everything.

I know what you meant...

Congrats for starting 2021 off in a big way!

A great start to a new year - that LC is in great condition !

Whatever year it was, 5 LCs in one hunt is nothing short of amazing

That's more than many will find in their hunting career, and that 1850 is incredible- Congrats!!
OP

JeffInMass said:
Whatever year it was, 5 LCs in one hunt is nothing short of amazing

That's more than many will find in their hunting career, and that 1850 is incredible- Congrats!!
Click to expand...

Thanks Jeff! My total for last year was eight... I can't believe I have more than half that in my first hunt of the year! Can't wait until this field is plowed.
T

That was a great hunt ,and a beautiful L.C.

wow I guess so!! nice finds

Awesome, Noah! I know you have some old sites up there. What a great way to start the year. Congratulations!

WannaDig3687 said:
Awesome, Noah! I know you have some old sites up there. What a great way to start the year. Congratulations!

Thanks WD! I'm definitely trying to stay at the older sites this year to give me the best chance of finding that spanish silver...
Last edited: Jan 4, 2021

Great way to kick off the new year with a bang! Five LCs in one hunt doesn't happen that often. Hopefully a silver will show it's shiny face.
You must log in or register to reply here.