New video i found just posted to youtube... Video taken by James Scott.
I believe he has a book out as well, and also tries to link the Swift Silver mines
with King Solomon's lost mine.. He believe's them to be one of the same..
watch and comment...

Good looking Buffalo Rock.. The next most interesting thing was the triangles but given the way the shadows were laying ,I think that was caused by the way the sun was hitting the camera lens..
Not sure there is any connection between the two legends as I haven't put any time into the Kings Mine.. Maybe the music is the only connection.
OP

I seen "nothing" in this video that would lead me to believe that he is no where close to finding the Swift Mines.. I've seen a few rocks like that myself! My opinion wrong buffalo rock! Swifts buffalo rock has a area "above" it that has a place where you can stand and look west seeing a hole through a cliff. Also the spot he claims is the mine is all natural rock fractures which normaly occur in the wilderness. The triangles in the footage, camera flare! Knowing he believes this to be Swifts mines, makes my Swift site all that much safer..lol. HH everyone!

When you really read about Bible commentaries they mention the people that sailed to the KS mines were not gone long enough to get to the new world, mine, smelt, and get back in time, and think of the capacity of the boats (not ships yet) they could not have carried enough and made the voyage here. Does his site still have reference to the lady that visited?(and later denied she was believing the story?) I wish it were true but think he is doing what a lot of us do, get on a tangent and deny the facts for our pride of trying to be the only one on the true track. i think I am past that step and looking at the various sites as just as good as anything I have found. Really leaning on Ki having great stuff as he has impressed the Frontiersman. Pictures tell the story of the boots on the ground, which tells the story of the years of investigation, which differentiates the true hunters from the armchair hunters.
OP

Curtis, you couldn't have said that better. I like keeping an open mind when it comes to Swift and his travels, I totally agree as well, that pictures tell the story. It's great documentation to refer back to when not in the field. I really wish I didn't delete my photos, at the time I felt it was best. I've had a great somewhat break from my search, my plans are to hit it heavy this coming winter. Ya know its true about the swift bug, once it bites it never goes away

I've recently acquired this " Swift Bug". Got a few pics. Not in Ky, Va. or Tn though. Not far off from all. Several clues that seem to match up with Swift's markers.

I like the "chop" marks photo. Have you plotted its location? Is it high on a ridge? or is it low in a valley, or down in a hollar?

It's on a high ridgeline right next to a huge balanced boulder. Yes I've plotted. Very near the coordinates given by Swift.

Another view of "chop marks" with an apparent face to left of them. We didn't see this face when we found them until we saw the pics. 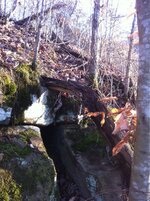 I also feel that the two legends may be of the same mines. A newcomer opinion, I must add.
M

This pic here.. did you move these to check out... it does say laid 3 rocks horizontal to hid the mine. can the sun rise over the mtn to the east... are these not the 3 stones he was referring too

TWO verticals, ONE horizontal. Top stone looks like a Lentel Stone, as in Stone Henge.

yomo has found something promising. I had watched the James Scott video. I was not impressed, but he is very paranoid about showing what he has found, and that makes for a poor video. As far as I know there is no claim jumping going on in KY...

here is the video link

What KI had posted on YouTube that he found on private property near the RRGorge.

I saw the video and wasn't that impressed either.
OP

KY Hiker said:
yomo has found something promising. I had watched the James Scott video. I was not impressed, but he is very paranoid about showing what he has found, and that makes for a poor video. As far as I know there is no claim jumping going on in KY...

here is the video link

What KI had posted on YouTube that he found on private property near the RRGorge.

This is site where found the coined Spanish silver.
OP

James Scott is a great person, enjoy his theory on the Solomon mines.
You must log in or register to reply here.